'The Talons Of Weng-Chiang' Puncture The Friday Docback!! DOCTOR WHO Story #91, More!!

...with a look at "The Talons of Weng-Chiang," a six part story which aired in 1977 and starred Tom Baker as The Doctor and Louise Jameson as companion Leela.

This story was initially released on DVD back in 2003 - that set contains a few extras this one does not.  HOWEVER, a number of new and tremendously insightful extras have been generated for this brilliant new 3 disc issuance, and the episode has been digitally has been remastered as well.   The resulting image and sound are vastly superior to that 2003 release, offering a sharpness of image, depth of color, and crispness of sound which eluded the story during its first DVD appearance.

THE NEXT EPISODE OF THAT PODCAST IS ONLINE!!

Thank you...so much...for all the kind words regarding last week's podcast with Ken Plume. The second installment is now HERE, and it&#T39;s...something.  Not exactly sure what happened.  No, we were not drunk.  Frankly, that might've helped.  A bit of insanity, much clumsiness, a great deal of immaturity, and a generous portion of laughter. Next week we'll be more on game.  Or maybe not.

But, can one really go entirely wrong with something called "Everybody Weng-Chiang Tonight"?  Don't answer that. 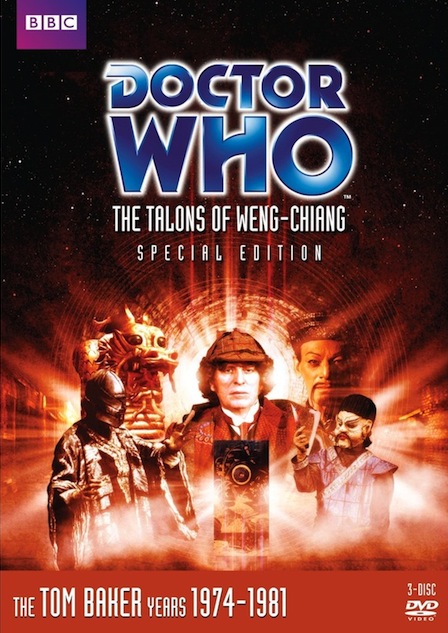 "We were attacked by this little man and four other little men."

Victorian London. A cab driver's desperate search for his missing wife leads him to the Palace Theatre, where illusionist Le H'Sen Chang (John Bennett) performs alongside a creepy and eerily lifelike ventriloquist's dummy named Mister Sin (Deep Roy).  Theater owner Henry Gordon Jago (Christopher Benjamin) is bewildered by the incident -  a confusion later compounded by reports of an enormous and mysterious figure stealing about the premises.

Meanwhile, The Doctor and Leela arrive in London's Limehouse district, where girls are going missing and the populous is becoming apprehensive.  They are are quickly attacked, defend themselves nicely, and are hauled into a police station for questioning - where they come face to face with Chang ( "I understand we all look the same...").  This meeting propels our heroes and their newfound cohorts into mystery and adventure whose origins stem from both the past and the future.

No matter who I talk to about DOCTOR WHO, "Talons" is consistently regarded as a consummate example of the perfect "balance" to which DW so often aspires.  Part mystery, part horror story, part SHERLOCK HOLMES, part PHANTOM OF THE OPERA, "Talons" derives inspiration from a number of genres,  piling those ideas on top of an intriguing (and unseen) science fiction backstory.   David Maloney's direction deftly balances multiple tones and conceits, without ever stumbling or falling into cliche (the later danger was very real here).  He's aided in no small part by scripter Robert Holmes' tightly structured, well-considered work.  "Talons" often feels effortless, but never comes across as overly simplistic. 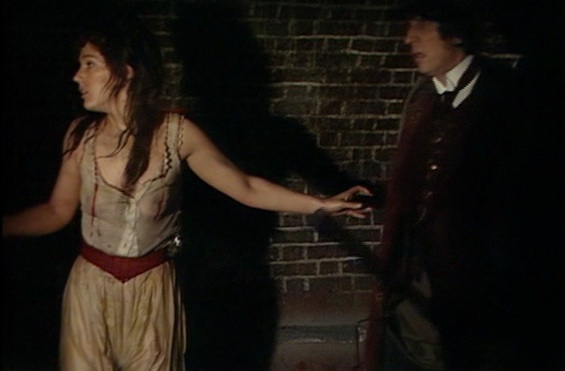 ...and anyone who doesn't like rats won't find themselves terribly re-assured by a few thunderously rodenty sequences in this story.

Michael Spice's performance as Magnus Greel is a tad over-the-top, but feels comfortably in-keeping with the PHANTOM OF THE OPERA inspirations of both this tale and his character.  Trevor Baxter is warmly engaging as Professor Litefoot, a seemingly solitary and humble man whose sense of refinement is challenged by the larger-than-life saga into which he finds himself inserted.  Christopher Benjamin's Jago  is equally charming.  He's an archetypical Victorian Showman whose sometimes blustery self-confidence is ultimately revealed to be as much a performance as the acts he presents.  He is, essentially, The Cowardly Lion of DOCTOR WHO  - and it's hard not to love him.  Based upon this pair's few scenes together?  They should've had their own show.

John Bennett (a non-Asian actor cast in the decidedly Chinese part of Chang) approaches his role with wit, dry humor, and mesmerizing intensity.  He mages to avoid offensive stereotyping while successfully creating  a level of empathy and tragedy within a part that, in lesser hands, could well have registered as one-dimensional.

Which pretty much sums up "Talons" as a whole.  It never settles - and always feels like it's going some extra distance.  Perhaps this is because the writing was already on the wall for a few critical show staffers, and they wanted to "go out with a bang."  Perhaps the abundance of location work for this story brought an edge and realism to these proceedings, whereas other stories contained to sets could never take advantage of such "vibe."   Perhaps it's the episode's subtle jabs at contemporary culture and racism past and present (there's even a quick anti-smoking aside thrown in, on-screen Opium use, and more than one satirical pot-shot at anti-foreign  sentiment).   Or...perhaps...it's just a kind of magic.  The same magic that happened on movies like CASABLANCA or the original STAR WARS film.  A magic that happens when something, as Steve Jobs would've said, "just works" - despite whatever obstacles are in its path.

-- Baker makes a surprising admission regarding his perceived "coldness" towards Louise Jameson...

-- While filming this episode on a redressed public street, all cars needed to be removed to preserve the "period" feel of the story.  One local couple was out of town - leaving their brand new  Porsche on the street, which clearly couldn't appear in the episode itself.   The production covered the car with a tarp and dumped a pile of hay and manure on top of it to conceal it.

-- Producer Philip Hinchcliffe on ideas he was hoping to bring to the show had he stated on as Producer.  Among them was a potential story influenced by Arthur C. Clarke's CHILDHOOD'S END, Incas or some sort of a South American jungle story, and the creation of a new mega-villain a la the Daleks.  Hinchcliffe admits he was having trouble convincing others that the later idea was solid.  Also, he also mentions that he was interested in returning to a Rider Haggard-esque, KING SOLOMON's MINES vibe based upon the success of "Talons."

-- Hinchcliffe also discusses his unceremonious re-assignment to the series TARGET.

MERRICK NOTE: When in town to meet my father once, Arthur C. Clarke once walked into my parents' house, looked around, and said "This is exactly what I expected."  No one ever figured out what he meant by that.

"The Foe From The Future"

-- Writer Robert Banks Stewart discusses his six part "Foe From The Future" treatment and its evolution into "Talons" under scripter Robert Holmes.

"Now and Then: The Locations of The Talons of Weng-Chiang"

Michael McManus (the guy who played Kai in LEXX / TALES OF A PARALLEL UNIVERSE!?) writes and presents a fascinating look at the rise, success, and passing of Victorian music halls like the one featured in "Talons..."

-- Discusses the inaccurate mythologies and truths of the Limehouse district in which the episode is set.

Melvin Bragg hosts a vintage retrospective/introspective look at WHO to date...

Strangely compelling "how to" demonstrating the creation of WHO toys from simple/common materials.


"Behind the Scenes" (ported from 2003 DVD release of this episode)

Raw cam video/footage from the filming of "Talons"...

"The Talons of Weng-Chiang" is now available on DVD HERE in the U.S. (I'm a tad confused about which issuance is available in the U.K. at the moment and don't want to point you in the wrong direction - if anyone out there can offer clarity, please post a message below). 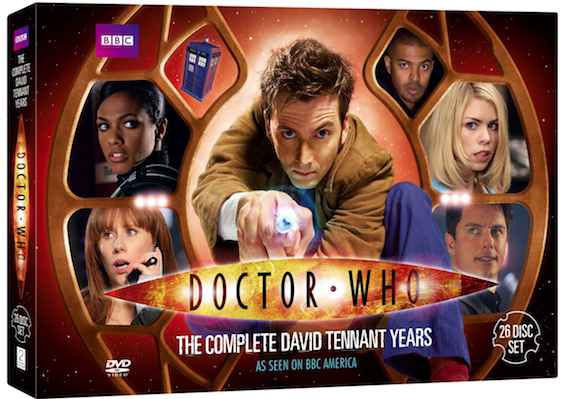 A beautifully re-packaged re-issuance of Seasons/Series 2-4 of the 2005+ DOCTOR WHO (Season/Series 1 starred Christopher Eccleston in the lead role).  This set also includes two interesting-but-lackluster animated DOCTOR WHO adventures with Tennant voicing the lead  ("The Infinite Quest" and and "Dreamland"),  and DVDs of the five DOCTOR WHO specials with which the 10th Doctor exited the show.  These specials are, by the way, also available on Blu-Ray and denote DW's migration towards HD.

David Tennant is the "favorite Doctor" of many people  - I haven't seen enough of every Doctor to make that determination for myself, but from what I've seen so far, I'd say:

1) There has never been a Doctor who was inadequate, only great actors/inventive embodiments of the character who may or may not have been supported by the scripts and talent they were working with.  And...

2) My personal favorite...so far...is Matt Smith (the current Doctor), with Jon Pertwee running a close second.  At the moment.  Although, as I say, the jury is still out.

But David Tennant is a magnificent and hugely talented performer, who appeared to have tremendous fun with this role and inhabited the role with vigor and inspiration.  For my money, he was one of several critical factors in broadening DOCTOR WHO's audience appeal/global recognition over the last few years - the other elements being the accessibility of content that then-WHO overlord Russell T. Davies brought to the equation, and  subsequent showrunner Steven Moffat's energy, slickness, boldness, and style.

As I mention above, this is essentially a re-packaging of individual sets that are already out - but it's a far more cost-effective offering than the individual sets themselves.  This might make a lovely gift for someone you're trying to inDoctornate (see what I did there?) into the WHOverse, a nice present for fans of the show, and/or a good option for folks who experience issues with streaming via Netflix or Amazon (I know you're out there). 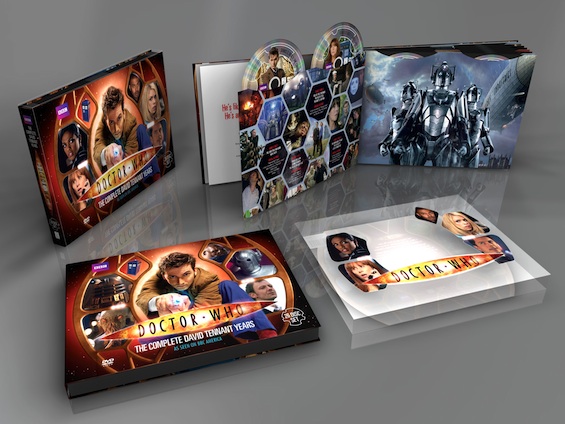