"The Girl Who Waited" Visits The Friday Docback!! READER REACTION To DOCTOR WHO S06E10 Is Here!! 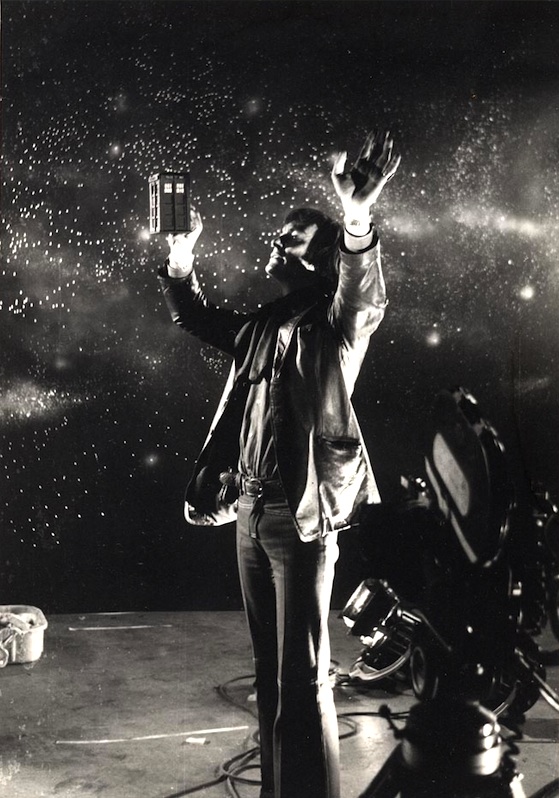 Ian Scoones preps the TARDIS for a shot.  From BBC VFX: The Story of the BBC Visual Effects Department (available HERE in U.S. and HERE in U.K.) - image via AICN

This weekend brings us "The Girl Who Waited" - the 10th episode of DOCTOR WHO's 13 episode Season/Series 6.  Which means…we're now less than one month away from finding out what does, or does not, happen at Lake Silence (I did that on purpose…I know it's Lake Silencio on the show…but it's the same thing…you see…)

"The Girl Who Waited" is directed by Nick Hurran (who also directs next week's "The God Complex") and scripted by Tom MacRae (who wrote the Tennant-era "Rise of the Cybermen" and "The Age of Steel").

The video we initially posted had poor image quality and even lower quality sound - here's a different angle  that is much brighter, sharper, and infinitely more audible.  In the piece, McCoy also discusses his dealings...or lack of dealings...with Sonic Screwdrivers.  Fascinating stuff - check it out.

My friend Ken Plume, seen above with McCoy, also records "A Bit of a Chat" - an ongoing podcast featuring different guests from various fascinating fields.  He's now posted his extensive chat with Sylvester McCoy, which you can find HERE.


AN IMPORTANT WARNING ABOUT SPOILERS

While the Docback Code of Conduct (posted below) strongly encourages SPOILER SENSITIVITY at all times, it is quite likely that this Docback will become a SPOILER INTENSIVE ZONE late tomorrow morning U.S. time (Saturday September 10) - when "The Girl Who Waited "airs in the U.K.

If you wish to remain free and clear of "Girl Who Waited" spoilers until after you've seen the show for yourself, you should tread cautiously if visiting this page after late tomorrow morning U.S. time.

DOCBACK CODE OF CONDUCT
AICN's Friday DOCTOR WHO Talkbacks - aka "Docbacks"  - operate on a different set of standards than other AICN Talkbacks.  These standards developed quickly and naturally, and we intend to preserve them.  Accordingly, please take a moment to note a few guidelines which should help proceedings move along smoothly and pleasantly:
1) a Docback should be about completely open and free discourse regarding all things WHO (with, obviously, some variation on subject matter from time to time - the real world intervenes, discussions of other shows are inevitable, etc.)...  2) matters of SPOILAGE should be handled with thoughtful consideration and sensitivity.  Posts containing SPOILERS should clearly state that a SPOILER exists in its topic/headline and should never state the spoiler itself . "** SPOILER ** Regarding Rory" is OK, for example.  "** SPOILER ** Battle of Zarathustra" is fine as well.  "**SPOILER** Why did everyone die?"  Is NOT good.
And, above all...  3) converse, agree, disagree, and question as much as you want - but the freedom to do so is NOT a license to be rude, crass, disrespectful, or uncivilized in any way.  Not remaining courteous and civil, as well as TROLLING or undertaking sensational efforts to ignite controversy, will result in banning.  Lack of courtesy may receive one (1) warning before a ban is instigated.  Obvious Trolling or Spamming will result in summary banning with no warning.
In short, it's easy.  Be excellent to each other.  Now party on...