DOCTOR WHO's 'The Gunfighters' And 'The Edge Of Destruction' On Your Friday Docback!!

Merrick here…
…with a look at two vintage DOCTOR WHO stories.  One is new to DVD in the U.S. this week, both star William Hartnell - the first Doctor.
My chronological progression through "older" DOCTOR WHO episodes continues with…
"THE EDGE OF DESTRUCTION / THE BRINK OF DISASTER" (Story #3)
Written by David Whitaker, this two part story finds The Doctor, Susan (Carole Anne Ford), Ian (William Russell) and Barbara (Jacqueline Hill) stuck in a malfunctioning TARDIS and attempting to resolve bizarre anomalies.  The travelers become increasingly hostile and factionalized as their search for answers turns to suspicion (and ultimately accusation) of their own comrades.
The TARDIS viewscreen displays images of locations that aren't actually outside the ship, clock faces melt away,   and Barbara begins to sense a pattern or meaning to these apparent malfunctions.  All of this as our heroes encounter the most frightening monsters of all - their own dark misgivings about each other.
A cost saving, time buying episode developed in response to preparatory delays on "Marco Polo" (a story which aired subsequently) - "The Edge of Destruction" and "The Brink of Disaster" are set entirely inside of the TARDIS,  and features only our four principal cast members.
Despite this simplicity, the story is noteworthy for several hugely meaningful contributions to the overall WHOverse.  This is, for example, the first time we truly see The Doctor express an appreciation for the majesty and danger of the universe around him - the first time he speaks of the cosmos and its processes with any level of genuine awe or respect.  This flavoring…this vital sense of wonder…would eventually become a fantastic character trait in many Doctors to follow.
This story also sets up notion of "energy" escaping from TARDIS' "heart" (a conceit later brought to bear in the Eccleston-era "The Parting of the Ways"), and in no-uncertain-terms implies the TARDIS' sentience (following up on Ian's "Unearthly Child" assertion that the TARDIS is "alive," and nicely portending Neil Gaiman's recent "Doctor's Wife" episode).
"Edge" and "Brink" were directed by Richard Martin and Frank Cox respectively - different directors with two notably different styles.  However, this disparity doesn't hurt the episodes as…when all is said and done…this is a startlingly intimate tale hinging on atmospheres created by performance and timing more than any deliberate visual style.
This story is relatively simple when compared to the episodes preceding it ("An Unearthly Child" and "The Daleks"), but the mileage and the importance of character movements here…particularly regarding The Doctor…can not be understated.  In addition to the defining moments mentioned above, this also marks the first time we see The Doctor appreciating the "truth" of the people he travels with, the first time we see him admitting his fallibility with any level of true humility (as awkward as it is), and the first time we get a clear sense that he truly does want/need people around him.  And, as a result, this leads to him functioning alongside his fellow travelers, rather than merely dragging them around while being derisive towards them.
I'm not altogether certain the "gag" (i.e. what's happening to the TARDIS and why) makes a great deal of sense here, a sentiment partially and politely echoed in interviews on featured on the DVD's extras.  But, in this instance, whether or not it makes sense is rendered somewhat irrelevant given how critically formative the story as a whole turns out to be.
An audaciously unassuming milestone, "The Edge Of Destruction" and "The Brink of Diasater" are available along with "An Unearthly Child" and "The Daleks" (comprising the first three episodes of the show) HERE in the U.S. and HERE in the U.K.
NEW TO DVD IN THE U.S THIS WEEK…
"THE GUNFIGHTERS" (Story #25)...written by Donald Cotton.
The U.S. DVD of "The Gunfighters" can be found HERE - the U.K version is available HERE. 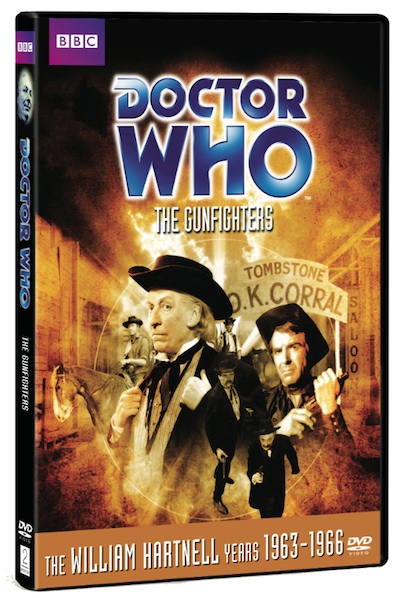 "...people keep giving me guns and I do wish they wouldn't."
- The Doctor, "The Gunfighters" Part 2 - "Don't Shoot The Pianist"
"The Gunfighters" finds The Doctor and companions Steven(Peter Purves) and Dodo (Jackie Lane) arriving in 1881 Arizona where cowboys struggle not to sound British and The Doctor has a toothache.
The Doctor's visit to the local "dentist", Doc Holliday (Anthony Jacobs), gives rise to a case of mistaken identity when the ornery Clantons mistake our "Doctor" for "Doc" Holliday - who they are out to get.  Thus the stage is set for the  fateful and legendary Gunfight at the O.K. Corral - the question here being, what part will our heroes play in the event, and will they survive it?
"The Gunfighters" is cinematically directed by Rex Tucker, and offers surprisingly strong photography, style, and design. I'd even go so far as to call the execution of this story 'remarkable' given how episodes of this time were actually made, and considering the limited resources with which their makers were forced to work.
Throughout all four installments, the "Gunfighters" storyline is underscored with a ballad (written by Tristram Cary, performed by Lynda Baron) which accentuates plot points, provides more insight into motivations, and contextualizes certain events less viewers become confused.  This is an interesting gimmick which works nicely for a while, although it eventually becomes a tad grating (as far as I'm concerned, the song is used incorrectly as the show progressed - it assumes the wrong tone and thus became distracting).
Despite so many interesting and well-executed elements, Cotton's script is never as tightly focused as it might've been, and some of the cowboys here…stretch credulity to say the least.  Perhaps this notion was gently poked at by The Doctor when he says to Dodo, "...you're fast becoming a prey to every cliche-ridden convention in the American West."
Appropriately but surprisingly, "The Gunfighters" is a rather violent episode - bringing about a n umber of deaths, and even a darkly comedic moment involving a corpse.  This isn't a complaint…I love this kind of stuff…I'm just consistently amused at the characterization of DOCTOR WHO as a children's show, when…the early episodes at least…feel quite dark and often channeling in nature.
"The Gunfighters" is ultimately flawed-but-interesting, and even memorable, with some startling shots that would be impressive even by today's measure... 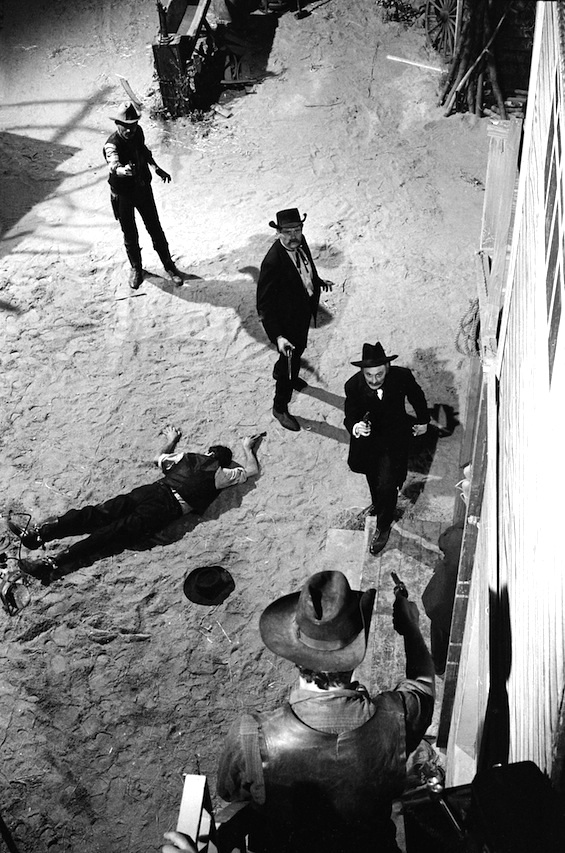 One particular image of Hartnell's Doctor sitting in jail is priceless.
Extras include…
THE END OF THE LINE
--- Discussions with Donald Tosh (Script Editor 1965-1966)...
--- Talks about John Wiles coming in to replace outgoing producer Verity Lambert...
--- mentions Wiles' and Tosh's commitment towards gravitating DW towards more adult tones...
--- Insight from Peter Purvis (Steven Taylor)…
--- Insight from Maureen O'Brien (Vicki)…
--- Perspective from Ian Levine (apparently some sort of UberWHOvian)...
--- Insight from Gareth Roberts (writer on DOCTOR WHO and SARAH JANE ADVENTURES)…
--- Discusses William Hartnell's friction with John Wiles...
--- Examines how "The Massacre of St Bartholomew's Eve" (Story #22) lost the show 25% of its viewers…
--- Looks at changes in production teams, and early plans to replace William Hartnell
--- Evaluates the removal of characters Steven and Dodo from the show...
--- Insight from Anneke Wills (Polly)…
--- Insight into William Hartnell's ailment and deteriorating condition.  He was suffering from arteriosclerosis - "resulting In vascular dementia where emotional liability and short-term memory loss are amongst the symptoms.  As s result, he was finding it increasingly difficult to remember line s and to cope with the rigors of a weekly television series."
— Ends with the entry of Patrick Troughton (the second Doctor) into the WHOverse…(Troughton was considered for the Johnny Ringo role on "The Gunfighters."  He was unavailable, and the part went to Laurence Payne).
TOMORROW'S TIMES: THE FIRST DOCTOR
Discusses DOCTOR WHO's reception/coverage by critics and press, and the escalating "backlash" against later Hartnell-era stories (critic Philip Purser suggested a particular Dalek in "The Chase" - Story #16 - was "undoubtedly Queer.")  Also looks at the "almost universal derision" with which the DR. WHO AND THE DALEKS feature film was met, and the equally unkind reception of its successor DALEKS' INVASION OF EARTH: 2150 A.D.  Touches on The Daily Telegraph's announcement that Patrick Troughton would join the show, whose stories would now be tougher and bring a greater emphasis on Science Fiction.
Mary Tamm (the first Romana in Baker-era stories) hosts, looking quite hot in a sultry librarian sorta way.
PDFs
Radio Times Listings
Preview of PARADISE TOWERS DVD (Story # 149 )
--- follow Merrick on Twitter ! ---
coming next week
We'll look at the DOCTOR WHO Season/Series Six, Part 1 on Blu-Ray
and  possibly "Marco Polo" (story 4, audio)
DOCBACK CODE OF CONDUCT
AICN's Friday DOCTOR WHO Talkbacks - aka "Docbacks"  - operate on a different set of standards than other AICN Talkbacks.  These standards developed quickly and naturally, and we intend to preserve them.  Accordingly, please take a moment to note a few guidelines which should help proceedings move along smoothly and pleasantly:
1) a Docback should be about completely open and free discourse regarding all things WHO (with, obviously, some variation on subject matter from time to time - the real world intervenes, discussions of other shows are inevitable, etc.)...  2) Matters of SPOILAGE should be handled with thoughtful consideration and sensitivity.  Posts containing SPOILERS should clearly state that a SPOILER exists in its topic/headline and should never state the spoiler itself . "** SPOILER ** Regarding Rory" is OK, for example.  "** SPOILER ** Battle of Zarathustra" is fine as well.  "**SPOILER** Why did everyone die?"  Is NOT good.
And, above all...  3) converse, agree, disagree, and question as much as you want - but the freedom to do so is NOT a license to be rude, crass, disrespectful, or uncivilized in any way.  Not remaining courteous and civil, as well as TROLLING or undertaking sensational efforts to ignite controversy, will result in banning.  Lack of courtesy will receive one (1) warning before a ban is instigated.  Obvious Trolling or Spamming will result in summary banning with no warning.
In short, it's easy.  Be excellent to each other.  Now party on...
Follow glenoliveraicn
Readers Talkback
comments powered by Disqus
Top Talkbacks
Trending