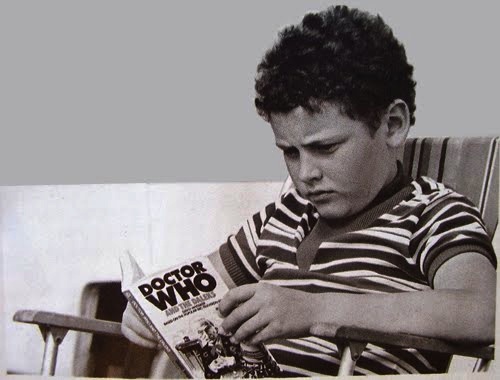 Did young Steven Moffat have any sense of what lay ahead?   (image contributed by Dr. Stark)

A QUICK NOTE ABOUT FRIDAY DOCBACKS…
Last weekend I posted a Talkback soliciting opinions on what our weekly DOCTOR WHO articles should be called.  I felt attaching a name to this weekly DW piece was important - as doing so would ensure a clearly delineated, identifiable, and focused destination on AICN for WHOvians every Friday morning.
After receiving numerous responses via Talkback and e-mail, and seeing our weekly (Friday) DOCTOR WHO posts referred to as "Docbacks" on other sites, I'm thinking these regular, Friday-launched READER REACTION/DOCTOR WHO article titles should, simply, incorporate the word "Docback" in some way.  The term is already being used widely both here and elsewhere - it's succinct and it's memorable.   This is in no way meant to discourage your participation in any other DOCTOR WHO Talkback opportunities that will appear on AICN.  Instead, it's simply an effort to illustrate that…once a week and come what may…there will always be at least one WHO-based Talkback opportunity and destination on a weekly basis.
As far as I'm concerned, these Docbacks will continue forever - or as long as there is genuine interest and full participation from our readers.  Docbacks will shift between consideration of "old" and "new" eps as Series/Seasons air, go on hiatus, etc. and will also extend beyond the televised WHO verse (more on this below)  Docbacks will have a weekly "theme" -  but no Docback should ever remain limited to just one theme. In the end, Docbacks should be about an exploration of all things WHO.
SO INTO "THE VOID" WE GO...
As alluded above, I thought we'd spend some time exploring the general WHOverse in greater depth while impatiently awaiting the arrival of shiny new DOCTOR WHO Season/Series Six episodes a few months from now.
We'll certainly be re-assessing the Season/Series Six installments we've seen so far when the DVD/Blu-Ray set carrying them arrives next month (U.K. preorder HERE, U.S. preorder HERE), but we'll also be digging into "classic" episodes from throughout the history of the show.  To be clear, and this is a very important distinction, I'm not using the term "classic" as a brand of inherent quality or general relevance - more as a denotation of any DW that predates Russell T. Davies' 2005 relaunch of the title.
We'll explore a number of audio adventures, various WHO merchandising, debate "Bests" and "Worsts" of episodes and characters, and so on.  If all goes properly, I may even show-up in U.K. at some point in the not-too-distant future.   There's a margin for error here - really hoping everything works out.
As we go, please keep in mind that…while I've seen each and every DOCTOR WHO made during and since 2005 (many of them multiple times)…I am just now diving into the history of the show in greater depth, even to the point of seeing some Doctors for the very first time.  As such, these Docbacks will also serve as a chronicle of my ongoing exposure and reaction to whatever awaits me in the show's vast and apparently varied history. There may be moments of context that I either miss completely or don't fully appreciate yet, and details about which I may request your opinions, guidance, or further illumination.  In the end, I can only hope that, if nothing else, my humble and admittedly inadequate musings will "get the ball rolling" on a weekly basis - and help to instigate the lively, articulate, friendly, and knowledgeable discussions for which these Docbacks have become known.
And as we move forward, you will find me to be unerringly genuine in both my positive and negative perceptions of DOCTOR WHO.  But know that even "the bad" is tempered with a very deep adoration for the show as a whole. How this love developed, how I was dragged kicking and screaming into The WHOverse, the episodes which immediately convinced me to watch more DOCTOR WHO (all were written by Steven Moffat, which I am only now realizing as I write this), and how glad I am that I am now in love with the show will all be covered in next week's Docback.
With that, let's move towards...
"Time and the Rani" (U.S. DVD COMING JUNE 14) 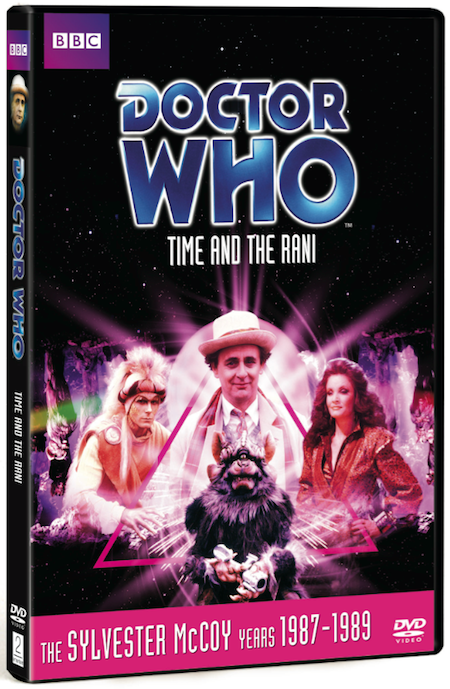 This marks Sylvester McCoy's first appearance as The Doctor, succeeding a shoddily dismissed Colin Baker. Baker couldn't be enticed back to film his regeneration (transition) into McCoy's Doctor - you know someone's unhappy when you can't even pay 'em to just lie there for a few minutes.
The episode finds our newly regenerated Doctor and his companion Melanie (Bonnie Langford) on planet Lakertya, where they square off against Gallifreyan exile and world class shouter The Rani (Kate O'Mara) - who is scurrying about collecting geniuses from across time (Einstein, Hypatia, and Pasteur) for nefarious purposes.  The Rani pumps The Doctor full of amnesia serum, enticing him to repair a machine needed to execute here dastardly scheme.  Seems his expertise in thermodynamics is needed, which she says was his "special subject" at university. Will The Doctor shake-off the serum in time to save the day?  What is The Rani collecting geniuses for?  What is her master plan?
Along the way, The Doctor and Melanie ("Mel") grapple with Tetraps, the Rani's army of bat-like enforcers.  They have long, useful tongues. 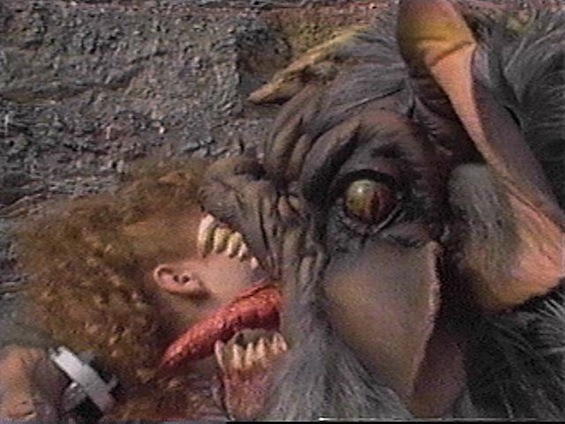 image via The Daily P.O.P
No wonder she keeps them around.  We also encounter and ally with  Lakertyans - birdish green folk... 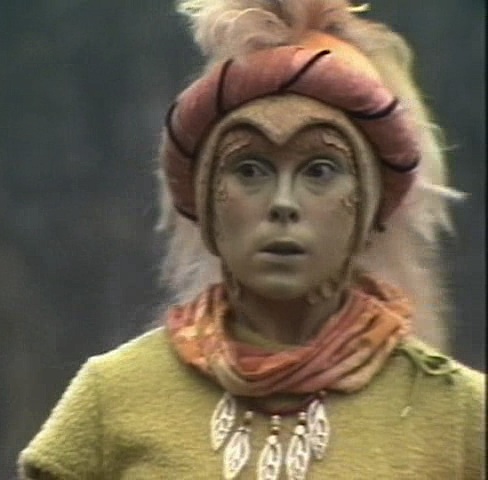 ...with an unnerving resemblance to Doodlebops. 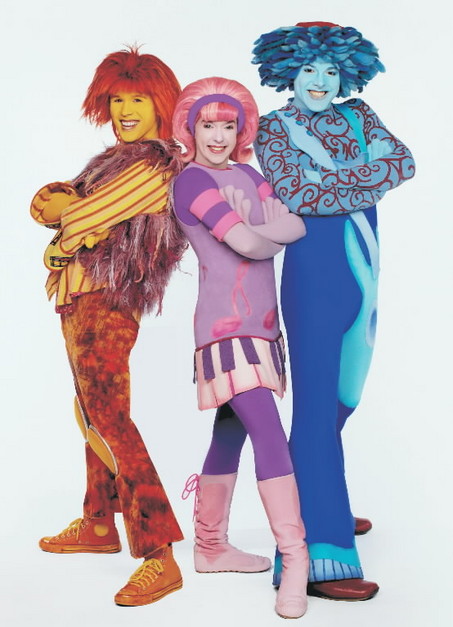 Seems the Lakertyan have a "Centre of Leisure," about which much ado is made.   But when it's finally revealed, the moment is decidedly anti-climactic and is tantamount to revealing a bunch of teenagers loitering in a mall on a very slow afternoon. To be fair, this is...to a large degree...the point of the place, and this "point" could have been significant within the broader framework of the episode.  But in the bigger picture, and despite its set-up, The Centre of Leisure - and much of what happens here - emerges as little more than a dispensable and easily substituted plot point that distracts from (rather than supports) the story's primary thrusts.
Which pretty much characterizes the whole of this installment - "TATR" is filled with compelling and promising ideas that rarely end up as fully, or interestingly, realized as we want them to be.  We've seen stories like this before in Fantasy and Science Fiction: a comparatively simple species (Lakertyans in this case) is overrun by a technologically and intellectually superior oppressor (The Rani in this instance) and it's up to outsiders (The Doctor and Mel this time around) to right the resulting injustices.  We've watched this many times prior to "Time and the Rani," and we'll undoubtedly see it again.  Hopefully, whoever spins the tale the next will bring fresher and atypical ingredients to the table - which certainly didn't happen here.
Kate O'Mara, who originated The Rani role in the Colin Baker-era "Mark of the Rani" attacks her part with a loud, over-the-top fervor which effectively diminishes any menace or threat her character might have conveyed.  She's not a villainess or antagonist as much as a gaudy annoyance, and Pip and Jane Baker's story never draws her as a genuinely daunting thwart for The Doctor.   It's difficult to imagine The Rani making through an average day without having a nervous breakdown - much less challenging Time Lords and piloting a TARDIS.

Which brings me to a question (one of those instances where I am asking for input and guidance):  The Rani's TARDIS figures into this episode: 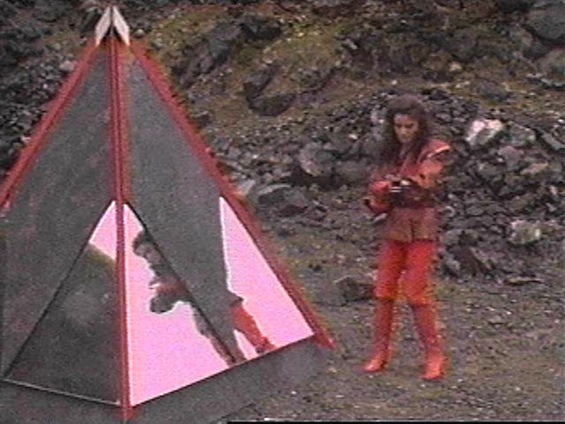