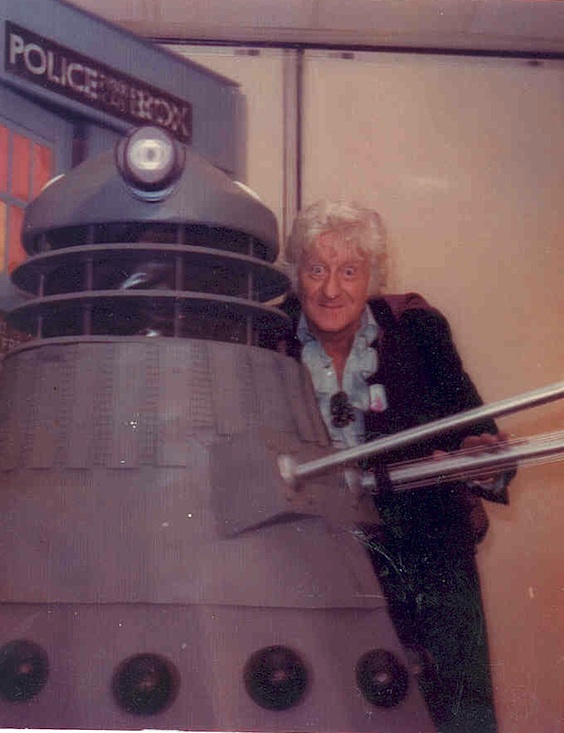 In the 1980s, AICN reader Beamus built his own Dalek.  It eventually challenged third Doctor Jon Pertwee in Ft. Lauderdale, Florida.  The Dalek is now dormant in Beamus' garage, and autographed by Dalek creator Terry Nation.  The image above  is a scan of 3D source material, hence its slightly blurred appearance.

...celebrating the return of DOCTOR WHO Season/Series Six with "Let's Kill Hitler," the eight installment of the current series.

This is traditionally where I'd offer a bit of first-hand, spoiler-free perspective/preview about a coming weekend's episode.  Alas, my screening capability of "Let's Kill Hitler" never materialized and...at the time of this posting...e-mails about the matter have remained unanswered.  Given that the episode has already been screened publicly and has already been the subject of multiple reviews elsewhere, and given that I've pre-screened all previous DWs this Season/Series to date, it's hard not to wonder if...perhaps...I've done something to evoke the ire of BBC or The Powers That Be.  To be very clear here, in no way am I suggesting that I'm somehow "entitled" -  or that I am by any measure unappreciative.  I'm just noting these highly odd circumstance, and venting a bit of aggravation.

Regardless of how this matter is ultimately sorts out , the Friday Docbacks/Reader Reactions will move stoically, and eternally, onward.

The AICN DOCTOR WHO Talkback - aka "Docback" - below is comprised of, and warmly welcomes, participants from across the globe.

While the Docback Code of Conduct (posted below) strongly encourages SPOILER SENSITIVITY at all times, it is quite likely that this Docback will become a SPOILER INTENSIVE ZONE late tomorrow morning U.S. time (Saturday August 27) - when "Let's Kill Hitler" airs in the U.K.

If you wish to remain free and clear of "Let's Kill Hitler" spoilers until after you've seen the show for yourself, please tread cautiously if visiting this page after late tomorrow morning U.S. time.

WELCOME to a very special, incredibly fascinating, and all-around-cool community of WHOvians. It is a pleasure to "meet" you.  If you've any interest in DOCTOR WHO at all, you will almost certainly learn something here.  I do...every day...and I love it.

Please take a moment to familiarize yourself with the Code of Conduct posted below.  Before you ask, YES, we're serious and YES it works pretty well.   Please don't hesitate to join in, and have fun!