Merrick's Personal Journey With The Doctor + A Quick Look At DOCTOR WHO #133 ('Frontios') On This Week's Friday Docback!! 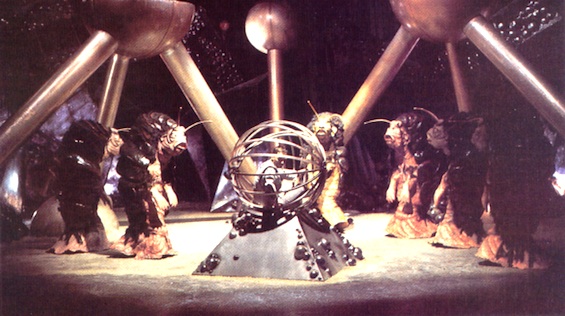 image via http://iaith.tapetrade.net/doctorwho/
They're a cross between big, ugly beetles and the Mondoshawans from THE FIFTH ELEMENT.  This is a fun notion, and I'm a sucker for living entities somehow making their way through space (INVASION OF THE BODY SNATCHERS), but the shoddy actualization of the Tractators pulls the rug out from underr any effectiveness the creatures may've had (see blow for the scripter's thoughts on this).  I am NOT attempting to be snarky about production values here.  In this particular case, the characters were too important and pivotal not to work effectively.
This was my first introduction to Tegan Jovanka (Janet Fielding) and I found her to be an infinitely preferable companion than, say, Bonnie Langford's "Mel."  Fielding looks awesome in that black leather mini, and is rather hot in general despite an abundance of rouge.  This is also the first time I encountered Turlough - on the DVD's extras, the actor playing him (Mark Strickson) indicates he was happy to be given something of substance for once (a clumsy paraphrase). From the fleeting references I've seen to Turlough in previous Docbacks, I gather that he's not a particular popular character?  I couldn't get a read on him here.
All in all, everything about "Frontios" seemed dull.  Peter Davison didn't look like he was having a particularly good time in this episode, although seeing The Doctor act like a Doctor (of medicine, in this instance) was both surprising and interesting.  Even if The Doctor isn't supposed to be a "medicine Doctor" kind of Doctor, it makes sense that someone of his age and experience would pick up a few tricks along the way.  Well played.
Performances by many supporting players seemed forced or undirected, and the choice to give so many human survivors such abrasive personalities undercuts the pathos of their being, well, the last of the human race.  Maybe this was an effort to illustrate their desperation and fatigue?  I don't know, but it didn't play effectively and…as is…many of these people didn't seem like they were worth saving, and come across as a bunch of distrusting, overacting goons in space Nazi uniforms. Perhaps THIS was the point?
In the end, the essence of what "Frontios" is trying to accomplish is fundamentally interesting and sound, and there are many fine moments to like here.  But as developed, Story #133  feels like too little material spread over too much time.
Extras include…
DRIVEN TO DISTRACTION
--- Insights from Eric Saward, script editor…
--- Insights from Christopher H. Bidmead, writer.  Says the Tractators inspired by woodlice creatures he found in his bathroom.  Admits to writing a show that was "outside the budget."  Which is presumably why the Tractators don't pay off, as mentioned above.
--- Insights from David Buckingham, designer…
--- Insights from Mark Strickson (Turlough)…
--- Insights from Peter Davison (who seems not at all bored in the extras)…
--- A discussion of the brutal murder of  Peter Arne, who was originally supposed to play Range in this story. William Lucas took over…
--- Insights from Jeff Rawle (who played Plantagenet)
--- Discussions of production issues with the excavation machine that appears in this story.  It was  originally designed to cut with human bone (an awesome idea)...
--- Discussions of the motion-limiting Tractator costumes (originally intended to roll up in balls and unfurl dramatically - man did that not happen…
--- Insights from John Gillett (Tractator Gravis), who says the Tractator costumes were a piece latex/rubber bell that fit over top of actors…
--- A look into production missteps (explosions that didn't go off - an actor who fell through a step, visible on camera - neither were reshot)…
DELETED AND EXTENDED SCENES
--- Approximately 15 mins...
PDFs