'The Rebel Flesh' Is On The Move!! READER REACTION To This Weekend's DOCTOR WHO!! 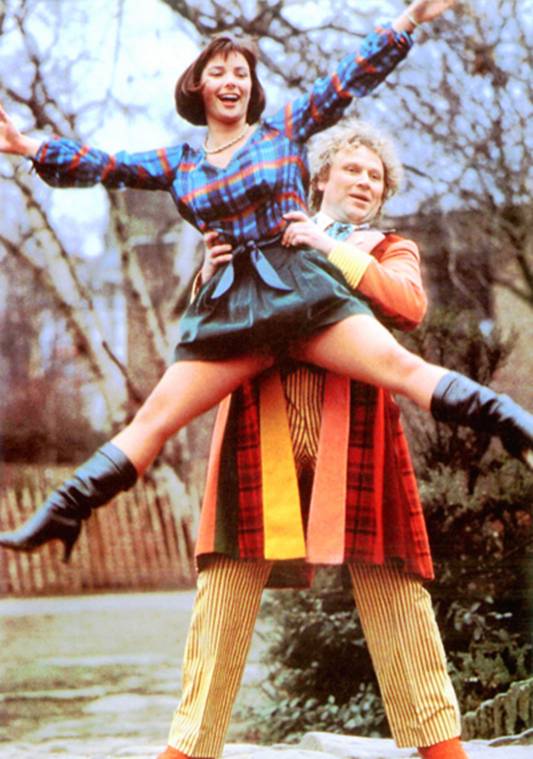 Colin Baker (the 6th Doctor) and Nicola Bryant (who appeared as his companion Peri Brown) circa 1984.

Image contributed by The Freakshowmonkey.

Saturday brings us "The Rebel Flesh" - the fifth installment of DOCTOR WHO Season/Series Six.  This episode finds The Doctor and Company grappling with Solar Tsunamis, Dusty Springfield music, and Gangers - constructs evoking AVATAR, BLADE RUNNER, FRANKENSTEIN, and Odo from DEEP SPACE NINE.  And, if you've seen any Science Fiction or DOCTOR WHO at all, you already know that any scenario combining AVATAR, BLADE RUNNER, FRANKENSTEIN, and Odo can't possibly remain trouble-free for very long.

Last week's "Doctor's Wife" may prove a tough act to follow for many, and "Rebel Flesh" (I love that title) does take a while to fully engage.  It should be noted, however, that this is the first episode of a two part story. And, even though its whole sports a decidedly leisurely pace when compared to previous Season/Series Six episodes, TRF's final moments are bound to raise a few eyebrows - and quickly launch regular viewers into a speculatory frenzy.

"The Rebel Flesh" is scripted by Matthew Graham (a creator of LIFE ON MARS - he wrote the Tennant-era, Olympic flavored DW episode "Fear Her" as well) and directed by Julian Simpson (a helmer on MI-5).  The tale moves us precariously close to the dreaded mid-Season/Series break that begins after "A Good Man Goes To War" - aka Episode Seven - two weeks from now.

"The Rebel Flesh" premieres the evening of Saturday May 21 at 9/8c on BBC AMERICA here in The States.

We're looking forward to WHOvians near and far conversing about  all things WHO via the Talkback below.

Accordingly, I'd expect a significant amount of  "Rebel Flesh" SPOILAGE to start rolling in 'round late morning/early afternoon  U.S. time (Saturday May 21) -  which is natural as the episode will broadcast in the U.K. a number of hours before it appears here in the U.S. on BBC America.

So, as far as this Talkback goes...

Readers from U.S. and other territories?  If you wanna stay virginal  regarding "Rebel Flesh" until you've seen it for yourself...you may wish to tread very carefully herein after mid-morning U.S. time Saturday May 21, as SPOILERS may well be afoot and we won't be doing anything to discourage them after it hits in the U.K.

Talkbacks dedicated to Readers' Reactions towards the episode are now open for business below.

Have fun and enjoy the show...