It Is (But Really Isn't) 'Closing Time' For The Friday Docback!! READER REACTION To DOCTOR WHO S06E12 Is Here!! 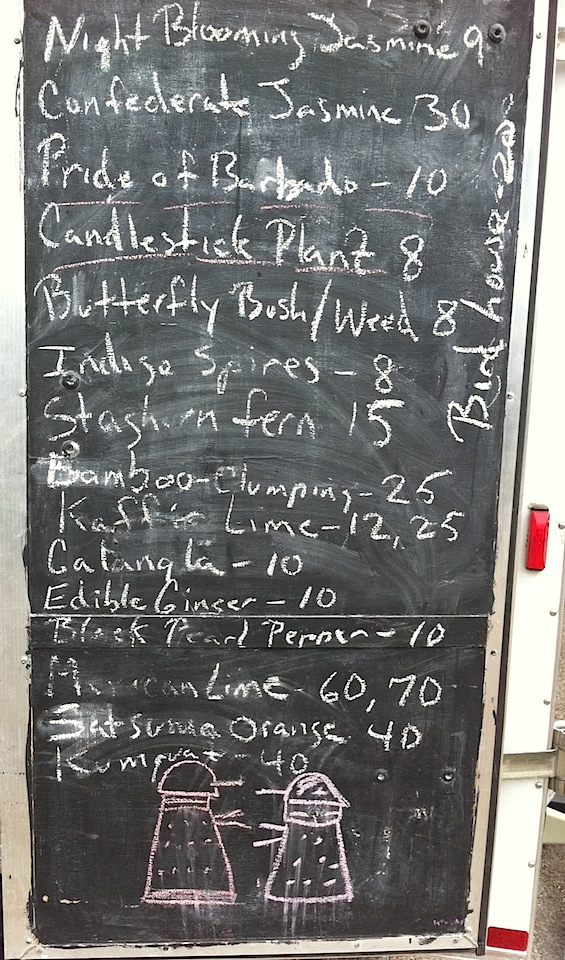 Spotted last weekend in the middle of a farmer's market in Austin, TX.  Daleks drawn by a four year old girl.

This weekend brings us "Closing Time" - the final episode before the show's Sixth Season/Series finale.

"Closing Time" is scripted by Gareth Roberts (who previously wrote DW eps like "The Shakespeare Code" and "The Unicorn and the Wasp") and revisits Craig (James Corden) - a character introduced last last Season/Series in "The Lodger" (also scripted by Roberts).  Steve Hughes, helmer of numerous "Doctors" and "Land Girls" episodes, is directing.

I've come across a fair number of people who trash talk "The Lodger" and Craig, but I've always been a complete sucker for both that episode and the simple truth of Corden's character.  I deeply enjoyed seeing The Doctor spinning about in such an atypical circumstance, appreciated the glee with which he seemed to embrace the mundane, and feel there's much more fun to be had in exploring The Doctor in similar fish-out-of-water situations.  Hopefully, we'll get at least a little of this in "Closing Time" - I'm quite eager to see what they've come up with.

A few weeks back I mentioned how excited I was by the "Special Edition" of "Day of the Daleks."  The term "Special Edition" is, itself, a tad confusing because it can (and often does) refer, simply, to a DVD or Blu-Ray which carries a whole lotta extras.  In this case, however,  "Special Edition" is more akin the the STAR WARS SEs, or the magnificent STAR TREK: THE MOTION PICTURE SE/restoration from a few years ago.  I.e. new sound work, rejiggered effects, some editorial tweaks, etc.

When I first mentioned it, I said we'd be revisiting the DOTD SE in the near future.  At the time, my hope and intent was to bring you some special media which illustrated the befores and afters of the changes that were made to the episode, in conjunction with BBC.  Subsequently, for reasons still unknown, everything went horribly wrong regarding our interaction with BBC - and said media will almost certainly not be forthcoming at this point.

Despite this setback, and as I noted a few Docback posts heralding the DOTD SE last week, I wanted to once more to strongly encourage anyone who owns the recently released DOTD DVD to check out the newly enhanced version of the episode.  I think it's a rather remarkable accomplishment, and pulls a very interesting question to the forefront:  I know BBC has previously issued SEs/revised versions of selected DOCTOR WHO episodes, but to what extent should this be done in the future?  And, to which stories?  Provided, of course, that the original versions would always be treated with the deference and respect they're now receiving.

Personally, I think The Powers That Be should seriously consider presenting DW SEs with more regularity.  My sense of the matter is that folks who might be hedging on 'getting into" retroWHO could be coaxed into the fold if the shoddy production values of some important stories were smartly smoothed over.  As I wrote in my initial piece eon the matter...

...my wife was laughing at the closing battle/invasion of "Day of the Daleks" as I watched the original version.  She saw the Special Edition enhancements  - and she wasn't laughing anymore.  The newly embiggened climax  worked /felt that much better.  That's quite meaningful, and potentially a very significant weapon in helping DW reach new or skeptical audiences.  And this...is important.

We've touched on these ponderings a bit already, but now that you're able to see the badassness of the excellent DOTD SE for yourselves, what are your thoughts on the issues?

Slightly off-topic, but I have to say it;  DOTD brings us what may be the best disentigrations/vaporizations I've ever seen.  Those guns..are wicked.

"The Girl Who Waited"
"The God Complex"

While the Docback Code of Conduct (posted below) strongly encourages SPOILER SENSITIVITY at all times, it is quite likely that this Docback will become a SPOILER INTENSIVE ZONE late tomorrow morning U.S. time (Saturday September 10) - when "Closing Time" airs in the U.K.

If you wish to remain free and clear of "Closing Time" spoilers until after you've seen the show for yourself, you should tread cautiously if visiting this page after late tomorrow morning U.S. time.