The Dark Tower Trailer Is Live And Quint Breaks It Down For You!

Ahoy, squirts! Quint here. Sony's YouTube page has the Dark Tower trailer up. I don't know if it was a mistake that it went live in the wee hours of the morning or what, but the trailer is out there now, at long last.

And... It's better, on the whole, than the glimpses I got at CinemaCon. Still have some major issues with a few choices made and it still doesn't feel right to me, but it's a step in the right direction.

I don't often do trailer breakdowns, but I want to talk about this one in-depth, so stay tuned after the trailer for some detailed thoughts and screengrabs.

Alright, you've watched the trailer through once, clean. Let's talk about some nerdy shit. I'll try to keep major plot spoilers out, but I will be talking about things a little more spoilery than just what's in the trailer, so if you're nervous about that, now's the time to leave (or just quickly scroll past my blatherings and look at the purty pictures).

One of the first images we get is a wide shot that shows the decay of Mid-World, Roland's home which has “moved on,” meaning that time and nature are overtaking the vast civilizations that once dominated the landscape.

This is a major step up from what I saw at CinemaCon, where the only structures seemed either brand new or slightly redressed stereotypical Old West Town sets. You feel the age here and see the futuristic tech of a giant city. It reminds me a little of the major cityscape of Lud from the 3rd Dark Tower book, The Waste Lands.

Sorry for the dark, blurry picture here, but I wanted to grab a look at this creature, another positive sign that they're not shying away from the weirder horror aspects of King's magnum opus. I've heard talk of a spooky encounter in the woods that Roland and Jake have, something new and not in the books. This could be that.

Jake's wall of crazy. He has visions of Mid-World, another aspect taken from later Dark Tower books, and just like in the early draft I read and reported on, he talks about it with his psychiatrist as a short hand to explain to the audience all the rules of this universe. The boy draws many of his visions and this is a collection of his drawings.

There's Jake's drawing of the title structure. To the left is what I believe is one of the buildings of Devar-Toi. Book fans know what goes down there (and also that we don't see this town until the end of the series, at least for that turn of the wheel). 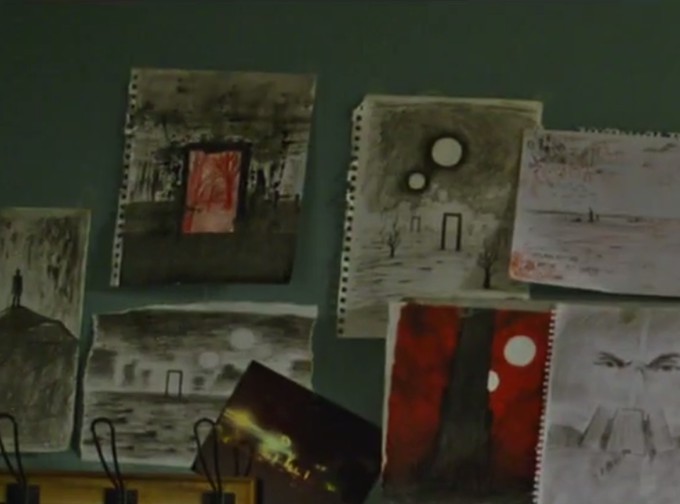 My favorite section of the wall, showing many of the doorways in Mid-World as they should actually look, not like the Stargate bullshit things we see later on in the trailer.

While talking to his shrink, Jake experiences something known as a beamquake, a signal that the tower is under attack, one of the many beams that supports it being broken down. While that happens we get our first big Stephen King Universe Easter eggs in the form of the above photo, clearly showing the exterior of the Overlook Hotel. Note: This is the Timberline Lodge, which is the version Kubrick used for his movie, not The Stanley, which is the real life inspiration for King. That was a definite choice made, possibly for easier audience recognition, but I'd wager they're going to try to subtly tie in King's cinematic universe into this film (and franchise, should we get the further installments).

Young Jake's journey to Mid-World brings him to this creepy old house, which contains one of the only passageways between our world and Roland's. 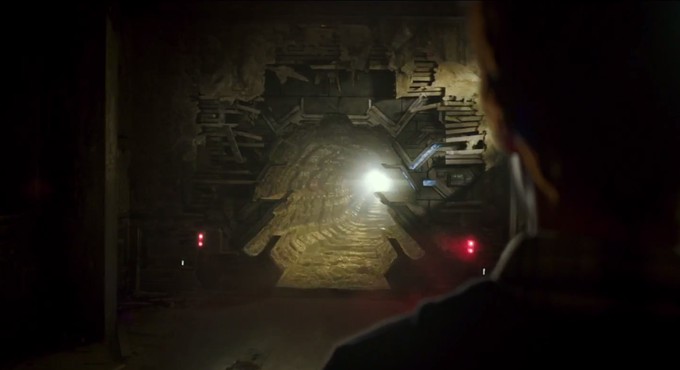 Here's that Stargate crap I was complaining about. I know it's a fanboy nitpicky thing, but the imagery of the old doors being the gateways is so much cooler than this overdesigned sci-fi stuff. And yes, I'm aware that in the later books the Tet Corp builds doorways that use tech instead of magic, but that shouldn't replace the key portals like this one. Maybe they work in the movie, but it's a choice I dislike both aesthetically and story-wise.

I very much like this image. In one shot I combines many of the things I like about the books. It melds Western with Sci-Fi. King's DT books are a melting pot of all kinds of pop culture and that's their charm.

Another touch I really like. Roland was always described as being able to reload at inhuman speeds and I like how they vary his technique. This roll along his gunbelt is my favorite of those shown in the trailer.

And Idris Elba as Roland Deschain. Still don't have a problem with his casting, we'll see how much of the early Goldsman draft makes it into his character, though.

There are many shots in the trailer of the Dark Tower being destroyed. Pretty sure they're not ending all known worlds in this first movie, so I'd wager these are parts of Jake's visions; a warning of a possible future.

Another shot of the Dark Tower being destroyed. What I dig about this one is how clearly the beams are shown. Just like spokes in a wheel, right out of the books.

I'm pretty confident in saying that this is Jake standing in front of a Thinny, another big moment from that early draft. A thinny is a weak spot where the barrier between realities has worn thin (hence the name). Sometimes things on the other side ain't friendly.

Roland seems pretty concerned about what he's looking at. Not sure if it's seeing the Thinny or tied more to the creature below.

Another dark, blurry shot of a creature, probably from the same scene shown earlier in the trailer.

The Man In Black's eyes, reflecting fire. One of the best shots in the trailer.

Here's a look at the kind of generic bad guys. I'd guess these are Low Men or Taheen, although in the books the Taheen are described as having animal heads (Weasels, dogs, rabbits, etc). The Low Men, a variation of Taheen, are lower down the societal rung and only have the face of rats. Maybe that was too weird to work, but it woulda looked a whole more interesting. Unless I'm wrong and these are a whole new breed of baddies. That could be a possibility, too.

Another rather nice landscape shot showing how Mid-World has moved on. This is my favorite of the wides because you can clearly see recognizable building structures that have been left to rot and be overtaken by the environment. There's a sense of time passing here that I think is pretty great.

The other giant King Universe Easter Egg. Jake finds the remains of a creepy circus advertising Pennywise. There's even balloons! And they're still floating!

I'm pretty sure the above image is a beam being attacked (those are one of those spokes holding the Dark Tower in place, remember?) by a beam of pure energy derived from... well, I guess you're see, but the Man in Black is behind it.

Another great shot of the tower itself and all the beams leading into it.

This is a small moment in the trailer, but it's my favorite character beat in all the footage I've seen. It's simply the Man in Black giving a knowing knock on graffiti that says “All Hail The Crimson King.” The Crimson King is kind of the Thanos of this world. He's the big bad and the being above Man in Black. This kind of lighthearted acknowledgment as he passes is a great character beat.

I was worried they were going to cut out the Guardian who protects the portal from our world to Mid-World, but this shot clearly shows Jake's not going to have an easy time getting here. The house itself doesn't want people using this portal. It's hard to tell in this blurry shot, but this is the house coming alive and trying to stop Jake from crossing over.

More of Roland reloading super fast. This shot was much improved from the unfinished rubber finger effects they showed at CinemaCon. Still looks a little goofy, but I'll take it.

My second favorite shot of the trailer: Roland teaching Jake the mantra of the gunslinger. The framing and lighting makes this look more like upper scale TV than a big movie moment, but again... as long as they get the characters and tone right I can forgive a lot.

Well, I'll be. That's Dennis Haysbert as Steven Deschain, Roland's father. So we get a little bit of backstory told in flashback at some point. Word was Ron Howard's version was saving all of the Young Roland/Training with Cort stuff for the TV spin-off. Maybe we get a little glimpse of that since the producers still say they're eyeballing a TV tie-in.

I get you have to make the pursuit of the Man In Black a little more exciting than the book (in The Gunslinger it's a chase that ends up in a long talk around a campfire before things get psychedelic and weird), but this stuff is my least favorite things from the trailer and extended footage from CinemaCon. This shit looks like Underworld to me. The Man in Black having Matrix/Jedi powers isn't my favorite choice.

I like this beat. It went on for much longer in the CinemaCon footage as Roland quieted his mind and seemed to reach out, searching through sounds until he found the poor bastard trying to make off with Jake. Not exactly the Roland of the books, but it feels right for the character.

And there you have it. The Dark Tower trailer.

Final thoughts: I gots issues, folks, but I also have a little bit of hope. As a fan, I don't need this thing to be an exact copy of the books... in fact, given the conceit of the story I'd be disappointed if it was, but I do need it to evoke some kind of similar feeling to what I got from reading. Right now this is like a telepod steak to me. Some pieces look right, but there's something missing in translation that is bugging the hell out of me.

I guess we'll all know how this turns out come August.