#2 – GREEN ROOM - #2
Why is GREEN ROOM #2? WHAT? THIS ISN’T A HORROR MOVIE? I can hear the outrage now even before posting this in the talkbacks, but while there is a heaping helping of action in Jeremy Saulnier’s follow up to the amazing BLUE RUIN, the setup is pretty much horror in an ASSAULT ON PRECINT 13/NIGHT OF THE LIVING DEAD scenario where monsters are outside (in this case skinheads) and have our heroes trapped in a tight location. Much like much of the best horror this year, GREEN ROOM relies on tons of tension and suspense as a group of punk rockers find themselves trapped in a green room at a skinhead concert hall. Additionally, the gore is some of the most palpable and toe-curling blood n’ guts work you’re going to see in a film this year. And the sad recent death of Anton Yelchin simply adds to the power of this film due to his powerful performance.  This is just a brutal and unforgiving film that leaves you feeling changed after viewing. You can find it here on iTunes, and Amazon here. Here’s my review of GREEN ROOM from April 9th! 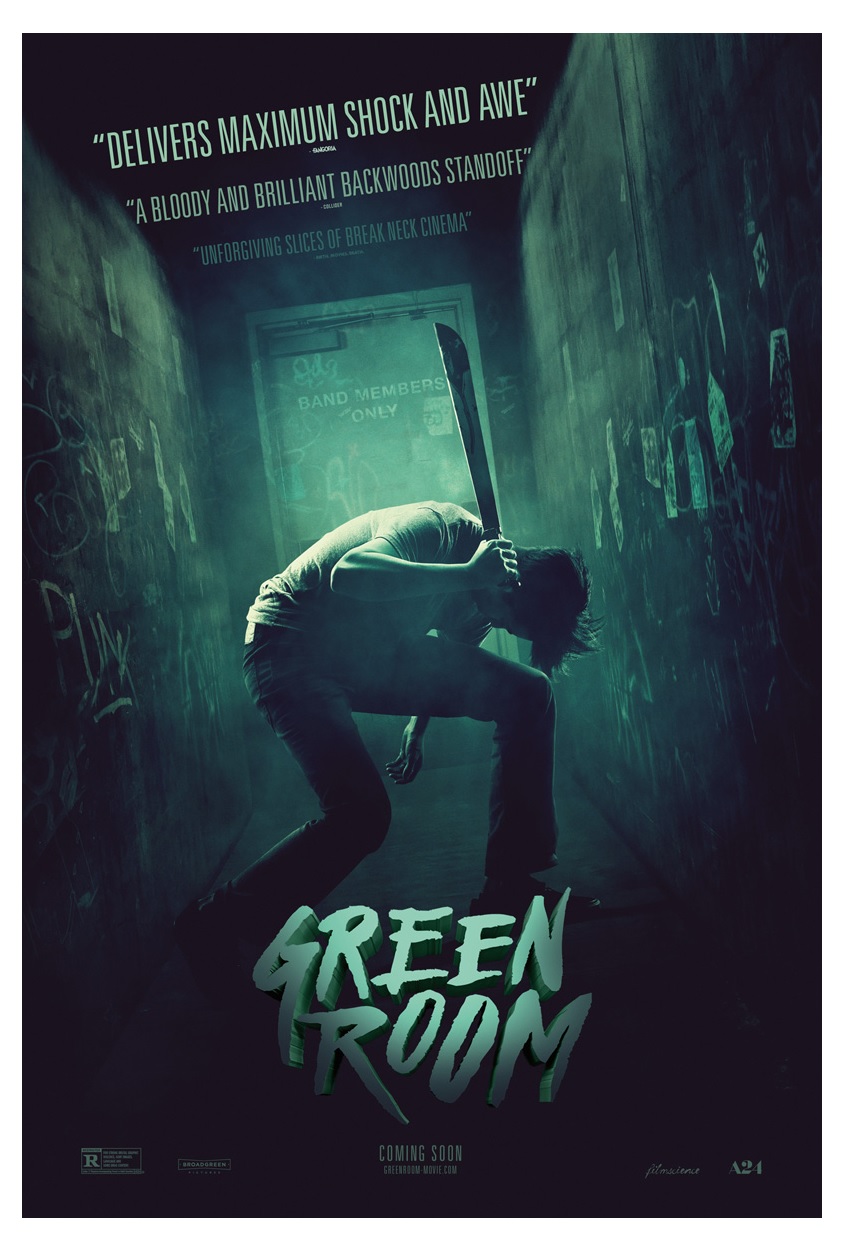 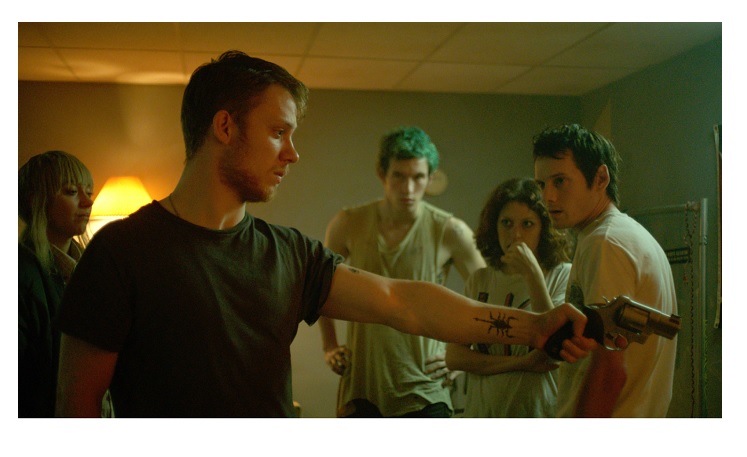 Made up of Pat (Anton Yelchin), Sam (Alia Shawkat), Reece (Joe Cole) and Tiger (Callum Turner), the Ain’t Rights, a punk band who makes their way across country in a van by swiping gas from cars along the way, have fallen on hard times. So when an opportunity to make $350.00 comes up, they don’t ask too many questions about it. Turns out, their latest gig is at a Nazi skinhead bar and when the band witnesses a murder, they hole up in the Green Room where the band gets ready to go on stage What transpires is an all out war between the trapped punk band inside the room and the murderous skinheads outside trying to make everything, including the Ain’t Rights, disappear.

What impressed me the most about GREEN ROOM is the immersive way the film engulfs the viewer. Sure it helps to know a thing or two about the punk scene, but really, this is a film, not unlike ASSAULT ON PRECINCT 13, there a group is trapped in a small place and surrounded by murderous maniacs looking to get into the fortified place the group is hiding. While the punk band is trapped in this small room, there is no way for the skinheads, lead by a super restrained and deathly powerful Patrick Stewart and BLUE RUIN’s soulful and subtle Macon Blair, to get in, so there’s a standoff here of epic proportions. This high standard is achieved because we get to know and like this band in the opening moments and sympathize with their struggle to simply make enough money to get to their next gig. Because these opening moments are so genuinely engaging, I was rooting for the band to get out of this one alive, no matter how perilous the threat. 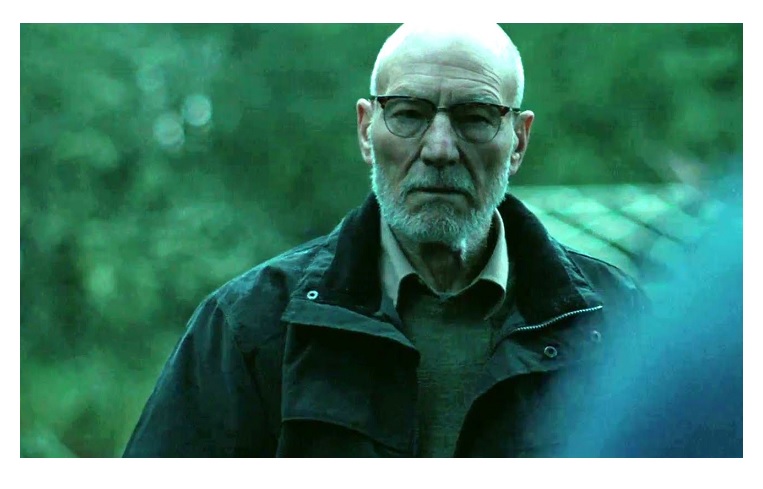 And that’s exactly what Saulnier does here by making these Nazi skinheads, which are already pretty deplorable by name alone, truly menacing threats. As the band saunters into the backwoods bar and watches the scowling faces ready to take out their aggressions through angry music and much mosh pitting, Saulnier patiently scans the entire facility to plainly show this dire situation even before the band realizes what kind of hell they’ve wandered into. Keenly played negotiations between the band and the skinheads outside as Yelchin and Steward act as the mouthpieces for each group could be seen as tedious, but the performances are so good here and the setting has become such a character, that the scenes are chock-filled with tension and scares.

GREEN ROOM is much more of a gory and horrific action movie than a true horror film, though there is lots of blood, scares, and horrific things going on. Those scares are potent. The stakes are dire. The characters are likable, mainly because Saulnier has padded this film with top tier talent. This is one gut punchingly good film that never holds back and spits suspense, fire, sound, and gore right in your face from start to finish. Don’t miss GREEN ROOM as it truly is one of the most in-your-facey, edge-of-your-seaty, balls-to-the-wallsy films you’re going to experience this year!

Plus it’s got an amazing soundtrack to boot by pretty much all of the punk bands you’re every going to need to know! 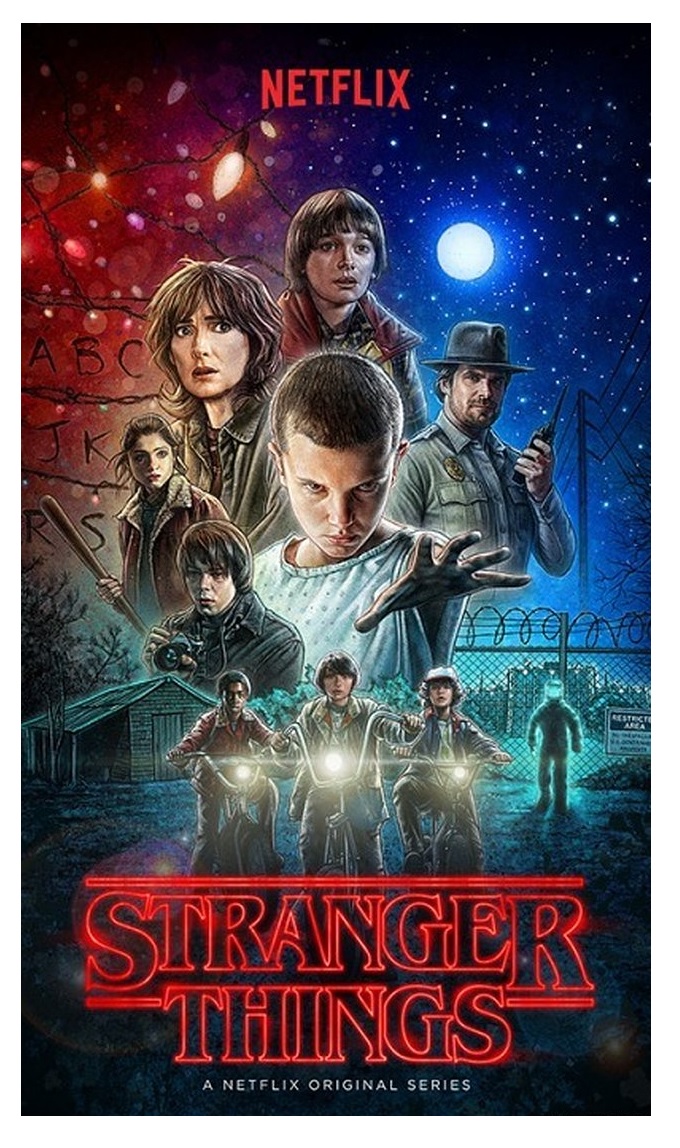 Worth noting: STRANGER THINGS!
While it’s not a movie, it definitely is worth mentioning in this horror countdown. STRANGER THINGS took everything we loved about the eighties thrillers and made it all cool again. It was a phenomenon and one that actually lived up to the hype that was presented to it. So many eighties movies were referenced in this one and this amalgamation made for one of the most endearing and engrossing filmic experiences of the year. So while this is a countdown for movies, STRANGER THINGS is bigger than that and is going to be influential to many, many horror movies you’re going to see in the coming years. You can check out the series here on Netflix!