#3 – THE INVITATION - #3
Why is THE INVITATION #3? You’re not going to find a more pitch perfect examination of paranoia this year than THE INVITATION. This film prolongs the inevitable until the very last second and keeps you guessing if there is something really going on or is it all just in the protagonist’s head. Karyn Kusama teases us with the truth over and over again until the heart-wrenching ending. And that final scene is about as shocking a reveal as you’re going to get this year. Pitch perfect filmmaking. You can find it here on iTunes, on Netflix here, and Amazon here. Here’s my review of THE INVITATION from March 25th! 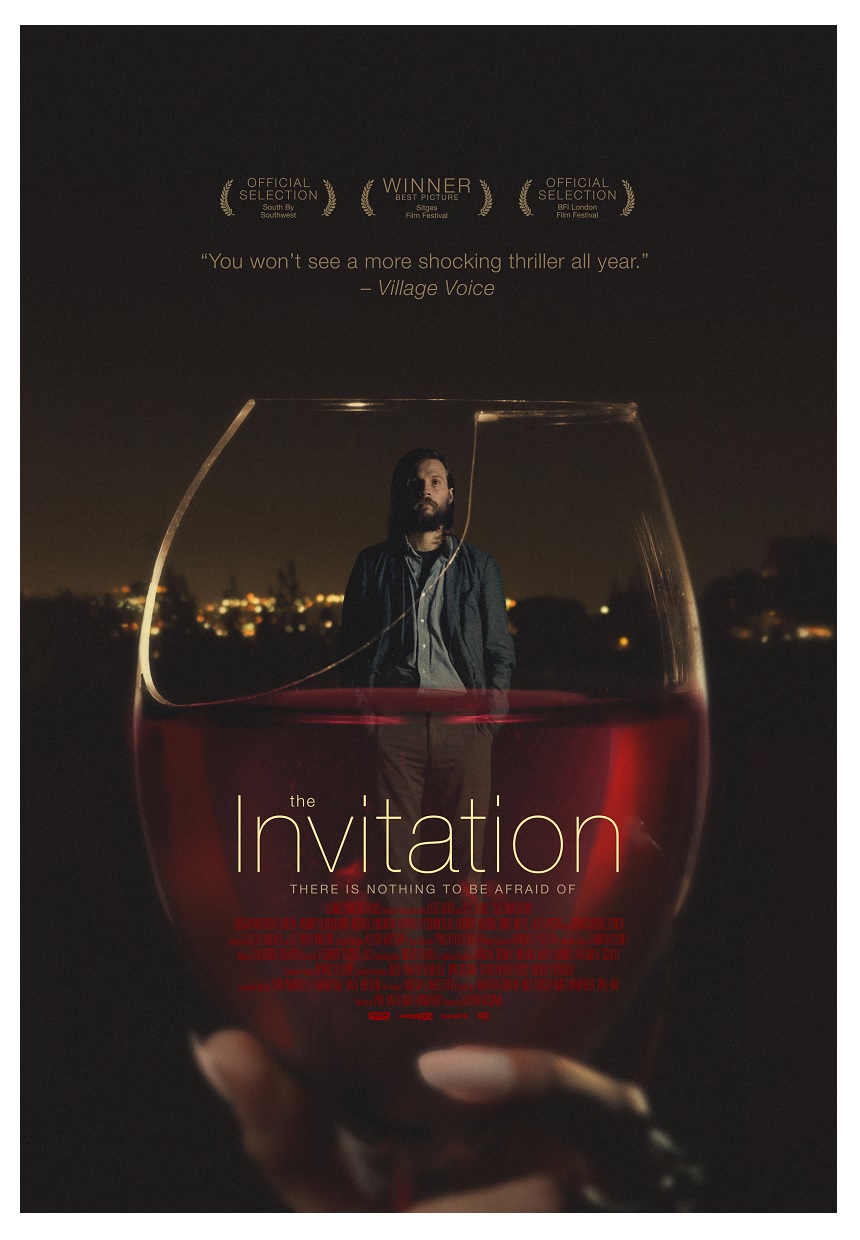 Some of the best horror taps into human emotion and amplifies those feelings of discomfort to fever pitch levels. There have been many films that rely on a heavy dose of paranoia to work. Recent films such as THE CONSPIRACY, and ENEMY, and classics such as JOHN CARPENTER’S THE THING, REPULSION, and ROSEMARY’S BABY push the paranoia to deafening levels of intensity. Another film can be added to that list of nerve-shredding paranoid masterpieces: THE INVITATION. 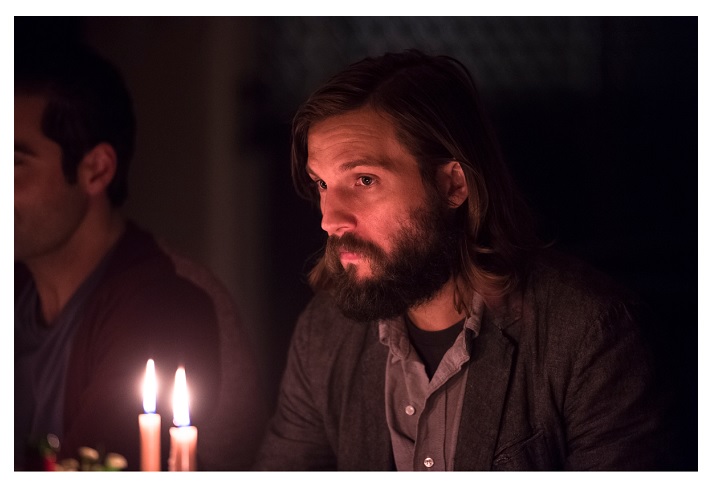 Accepting an invitation from an ex and her new husband to join old friends for a dinner party, Will (Logan Marshall-Green) and his new girlfriend Kira (Emayatzy Corinealdi) arrive at the lavish home of Eden (Tammy Blanchard) and David (Michiel Huisman) to find it full of their friends, partying and greeting them with smiles. As the night goes on, there is obvious tension in the group and it eventually comes out that Will and Eden lost their child, which ended up breaking up their marriage. This being the first time they have seen each other since the breakup, it’s obviously somewhat uncomfortable, but pleasantries are used by all--that is, until Eden and David start talking about a new life betterment program they have been following. As the night goes on and the wine begins flowing, Eden and David begin to push their newfound spiritual awakening on the group, playing a video of the spiritual leader (Toby Huss from CARNIVALE) in which a woman embraces death and dies on the video. This of course unsettles the group, but doesn’t seem to bother Eden and David, who feel it is a beautiful moment. Writing this off as some kind of eccentricity used to cope with the loss of Eden’s son, the group moves past it and continues with the evening’s drinking and feasting--save for Will, who from the get-go has a dreadful feeling that something evil is going on. But is Will being paranoid and insecure, having been confronted with his ex-wife and their loss, or is there really something horrible transpiring? The answers are given by the end of the film, but it keeps you guessing for most of the film’s runtime.

What this film achieves so masterfully is the sinking feeling that something is off. By focusing the camera on Will through this film, casting him as the outsider in this group of friends, THE INVITATION does an amazing job of making you question if the scenes we are seeing play out are suspicious because we are seeing this from Will’s depressed and troubled perspective or if this really is reality and something horrifying is happening under the partygoers’ noses. So many scenes focus on Will looking around corners, sneaking through the hallways and witnessing snippets of conversations that, again, could be taken either way. The masterful way in which this film teeters on either being a story of a paranoid man or a truly dire situation for such an extended period of time is what grabbed me by the collar and pulled me in off the edge of my seat and as close to the screen as possible.

Those who like the slam-bang style of action horror where there’s a jump scare every two minutes that you can giggle at into your sweetie’s shoulder will definitely want to take a pass on THE INVITATION. This is a film you must allow to slowly creep in to enjoy. It’s a film where you have to give up the need to release that tension that is building in the situation before you. The release will come, eventually, but the beauty in THE INVITATION is the way it patiently holds back the answers until the very last minute. That doesn’t mean that once the answers are given, the credits roll. It means that you don’t know if the situation or Will is nuts for quite a while, but once the ball is dropped, the resolution is definitely worth the wait, with a final scene that is infinitely powerful in its simplicity.

THE INVITATION conveys a sense of paranoia so strong it cannot be denied. It’s a film that deftly plays with your expectations and amplifies the senses to a level where you are suspicious of everything. The performances are fantastic, especially that of Marshall-Green and Blanchard as the former couple who are familiar with who each other were, but not who they have become. Add the always amazing John Carroll Lynch in yet another creepy-ass performance and you’ve got a cast of characters who we will look back on one day and recognize as the first time we’ve seen these superstars in action. If you’re the type who gets a thrill about movies that make you slowly look over your shoulder in fear, THE INVITATION is a film that accomplishes both an excellent build-up and an equally amazing resolution. 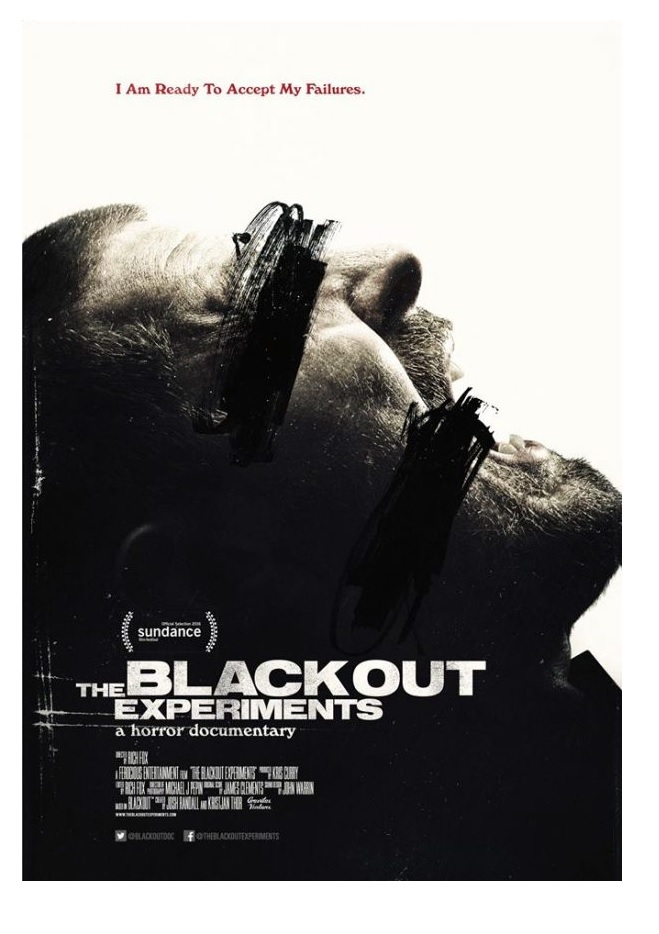 Worth noting: THE BLACKOUT EXPERIMENTS!
If you like horror and love testing your limits, check out this documentary (of sorts) about people who seek out the most extreme of terrifying experiences and the underground project called THE BLACKOUT EXPERIMENTS which mentally and physically torment these people to the limits of their sanity. This one is a weird one, but it’s an interesting examination of our fascination with fear. Check out my full review of the film here. You can find it here on iTunes and Amazon here!