#5 – BONE TOMAHAWK - #5
Why is BONE TOMAHAWK #5? It’s got Kurt Russell fighting cannibal cave monsters in the Old West. What more do you want? Plus Kurt has those chin-whiskers from THE HATEFUL EIGHT. And it’s got one of the best performances Richard Jenkins has given since SIX FEET UNDER. And it’s gory as all get out. This film is a fantastic little mix of horror and western genres and I loved every gritty, dusty, bloody second of it. You can find it here on iTunes and Amazon here. Here’s my review of BONE TOMAHAWK from October 24th of last year! 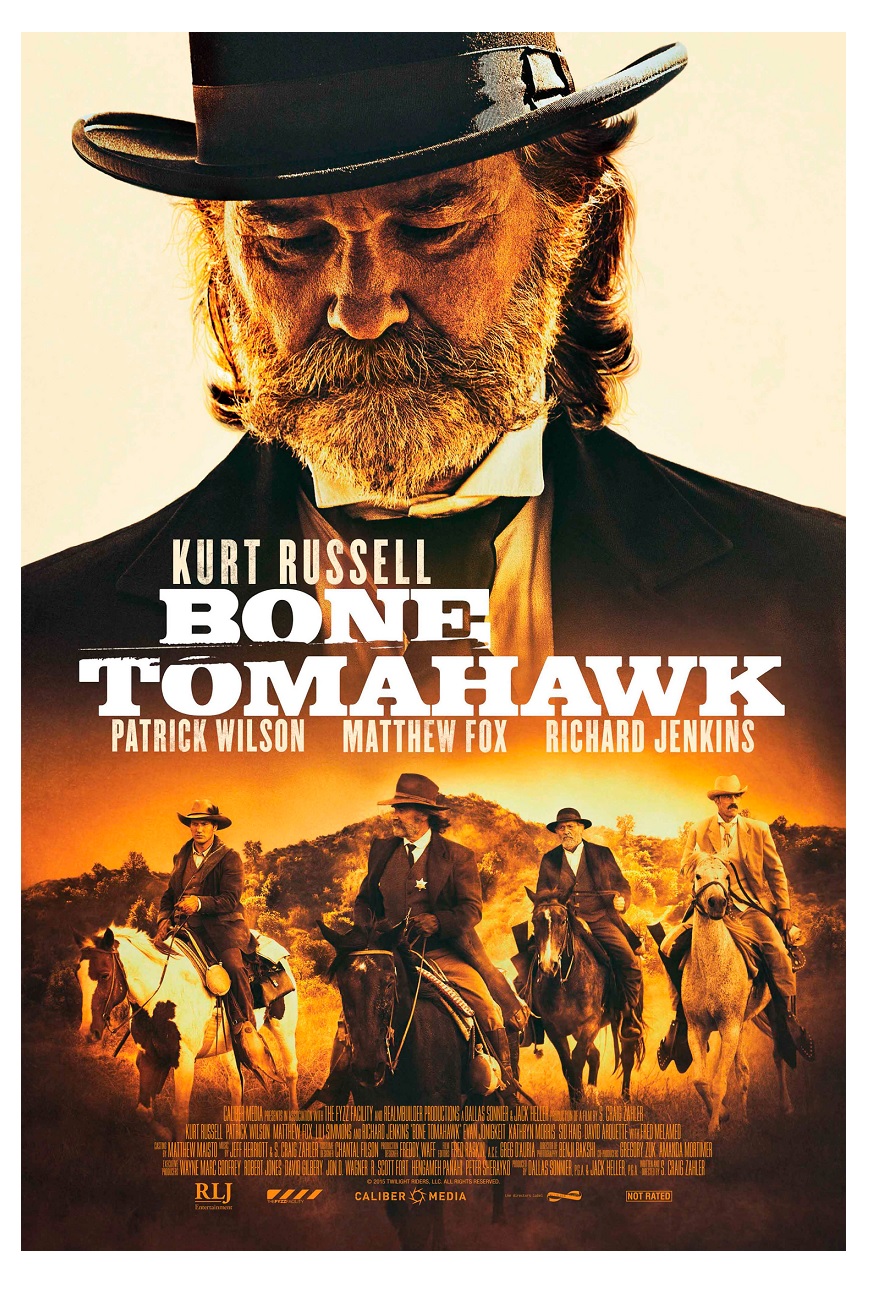 While BONE TOMAHAWK could use a few minutes or two trimmed from a few scenes, it’s still a unique and pretty excellent mix of Western and horror with a cast to die for. 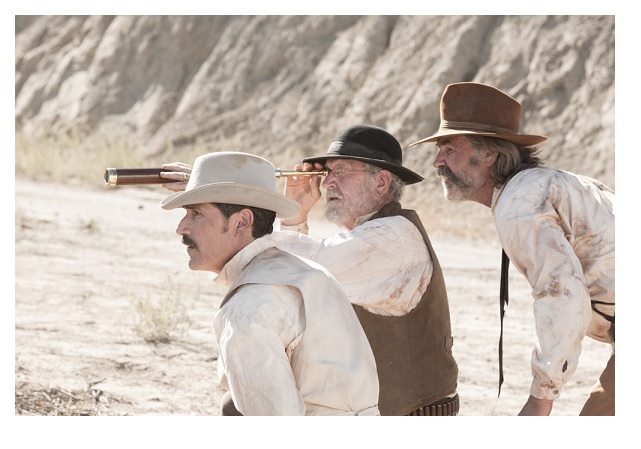 When his wife is captured by natives, Arthur O’Dwyer (Patrick Wilson) a cowboy, sets out to find her, despite the fact that he has a broken leg. Accompanying him on this quest is Sheriff Franklin Hunt (Kurt Russell), his noble Second Deputy Chicory (Richard Jenkins), and gentleman gunslinger John Brooder (Matthew Fox). The four cowboys head out to uncharted territory to face a primitive tribe of natives who eat human flesh.

A cannibal Western is territory that’s been sort of charted before in a serious way in RAVENOUS and a less so manner in CANNIBAL: THE MUSICAL, but neither of them have felt as much like a genuine Western as BONE TOMAHAWK. From start to finish, this one feels as if it follows a conventional Western path, with a group of cowboys heading out to undiscovered country to save a damsel from monsters. There’s a knightly quest aspect of this as well, but for the bulk of this film this is simply four very different cowboys trying to get along with one another on horseback. 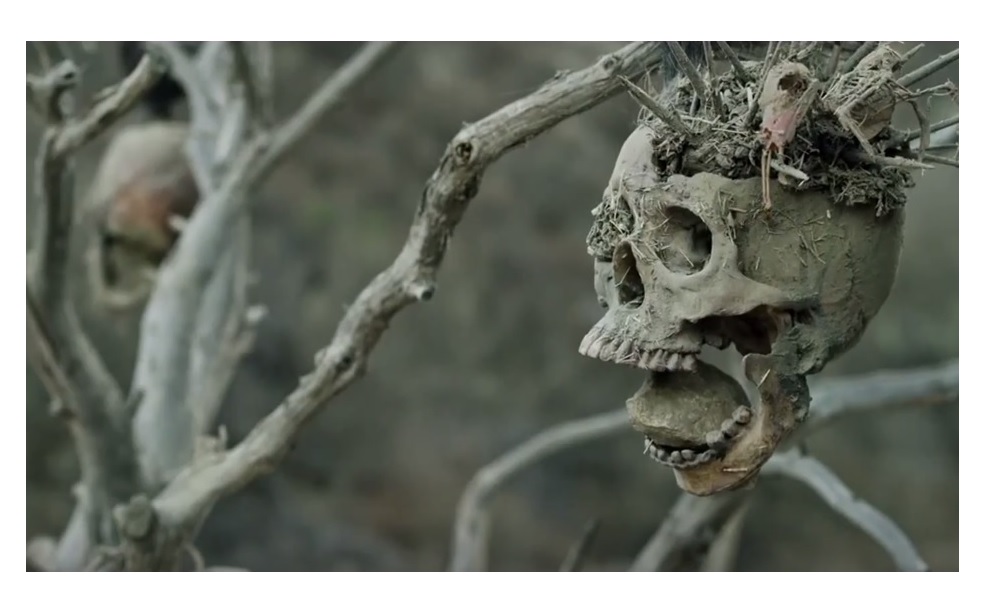 Now that alone isn’t really that interesting, but considering this is Kurt fucking Russell in a Western, accompanied by not too shabby actors Patrick Wilson and Matthew Fox, with Richard Jenkins added much needed comic relief as well as more heart than I was expecting, and this all of a sudden becomes a character piece like few others with four fantastic actors bouncing off of one another in a most entertaining way. Simply seeing these four brave the elements with only a horse, some rations, and a whole lot of firepower is going to be cause alone for people to want to see this movie and this film delivers everyone I expected as all four give their all making us care for them and root for them through this ordeal. Wilson in particular is great as the wounded cowboy who won’t quit until he finds his wife and Fox is amazing as the cold blooded killer of the group whose only soft spot seems to be for his own horse. Russell is as amazing and gruff as one would expect, but Jenkins surprised me as he really is the beating heart of this film, providing innocent, though dim-witted observation and naïve loyalty to his sheriff. All in all, this is a quartet of leads that I would follow anywhere.

Once the four get to where they are going, this film veers from being a typical Western in many ways. First and foremost, things get extremely bloody and gory. I was taken aback at the ruthless level of violence this film delivers as the four men bite and scratch for their lives against these savages, described as Troglodytes, who eat human flesh. But cannibalism isn’t their only sin. These creatures are more primate than human, adorned with jewelry stuck into their windpipes to make a roaring sound and some of them even have tusks. These are not your typical feather wearing noble Native American warriors. These are primitive creatures straight out of a horror film and their wrath is horrifically vicious. What little glimpses we see of their culture is pretty monstrous to behold. 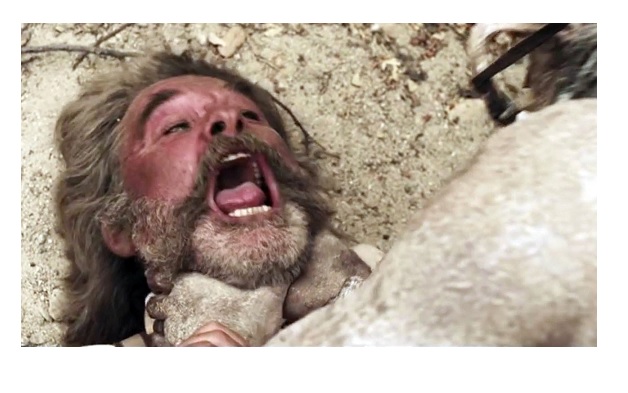 The shift from Western to horror film is not as jarring or trite as something like FROM DUSK TIL DAWN. We are told early on that these natives are monsters, so when they do finally arrive, we sort of know what we are getting. I loved how each of the actors, none of them known for hardcore horror films (sure Russell did THE THING, but that was twenty years ago, and I certainly don’t count Wilson’s INSIDIOUS turn as this level of hardcore), are fully committed here in delivering a solid Western that just happens to end in an utterly horrific manner. The final scenes of this film will make gorehounds cheer and others who are less appreciative of the red stuff wince like hell. Still, even with the monsters they fight and the horrors they endure, the four stars are cowboys all the way through.

This is a unique film that straddles two genres (that of the Western and the horror story) and does so with utter respect for both. While it might be a little long in the tooth for some (the film clocks in just a bit over two hours), I wished I could have spent even more time with these amazing actors fighting monsters with six guns and cowboy hats. Russell is amazing and again plays the ultimate cowboy badass. Fox, Wilson, and especially Jenkins are all stellar every second they are on screen. If you’re a Western fan and don’t mind some gruesome gore and some truly horrific monsters, BONE TOMAHAWK is going to be for you. For horror fans, this is probably as perfect a Western horror film you’re going to get. I savored every bloody, gritty minute of this film. Highly, highly recommended. 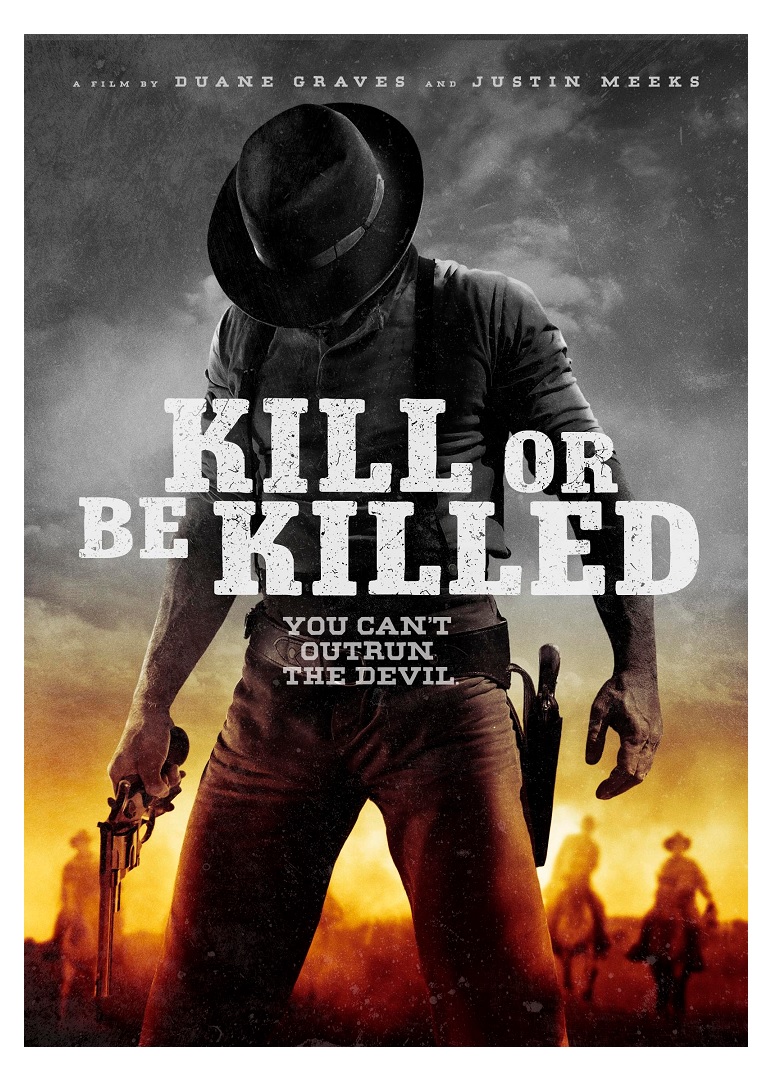 Worth noting: KILL OR BE KILLED!
Another fun film that rides both the horror and western genres is Dwayne Graves and Justin Meeks authentic looking and feeling KILL OR BE KILLED. This one is more western than horror, but it definitely have a dark and mysterious tone as the members of a band of killers are murdered one by one by an unseen killer. The way it all plays out by the end is truly poetic. This is a subtle and sublime little treat that should be recognized. Meeks and Graves are one of the more interesting filmmaking duos out there today. Here’s hoping for bigger and better things for them as this was a solid outing. Check out my full review of the film here. You can find it here on iTunes and Amazon here!