#7 – THE SHALLOWS - #7
Why is THE SHALLOWS #7? Because I am terrified of sharks and this is one terrifying shark movie. While this is a slow opener and some of the logic of the film doesn’t really match up (especially since there’s a whole whale for the shark to chow on just a few yards away, yet who wouldn’t want to take a bite out of Blake Lively? knowwhutImean?). Still, the imagery of the shark with a mouth full of crooked teeth chomping at me in the theater was enough to make me want to chuck my underoos by the end of this film. There’s a lot of primal terror to be had in this one if you don’t think too hard about it. You can find it here on iTunes and Amazon here. Here’s my review of THE SHALLOWS from June 24th! 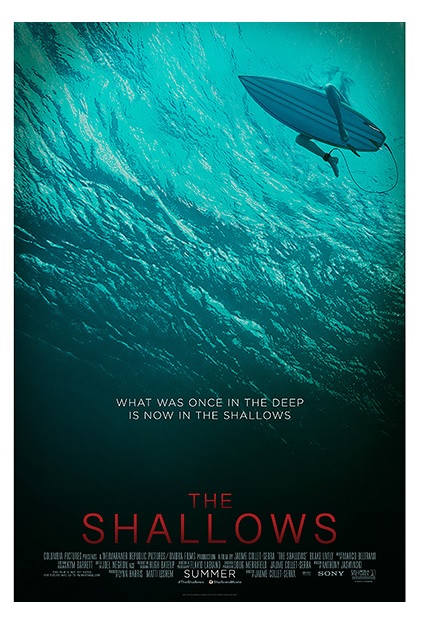 aka IN THE DEEP
Directed by Jaume Collet-Serra
Written by Anthony Jaswinski
Starring Blake Lively, Óscar Jaenada, Brett Cullen, Sedona Legge
Find out more about this film here and on Facebook here
Reviewed by Mark L. Miller aka Ambush Bug

Sharks scare the shit out of me. I can watch werewolves, zombies, serial killers, the most gut-churning gore, and any other beastie the horror genre tosses at me, but sharks are the one thing that will have my heart pumping and my feet pulled up to my chin more than anything. I spent most of the time tapping my leg in nervous tension while watching THE SHALLOWS, which is a surefire indication that this shark movie is one of the best killer shark films in ages. 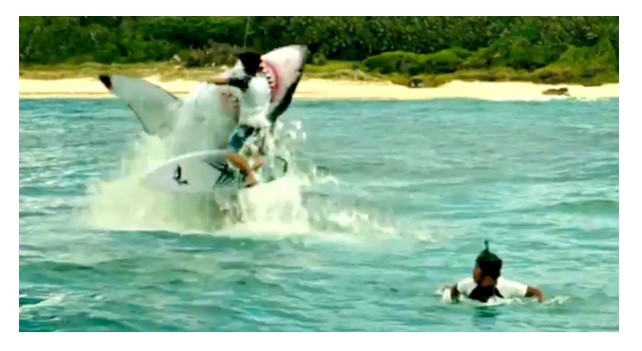 The premise is about as simple as it comes. After losing her mother to cancer, Nancy (Blake Lively) tracks down a secret beach her mother went to before she was born to surf and reminisce about what to do next with her life. With her friend left hung over in the hotel room, Nancy goes to this hidden cove alone. After running into a pair of surfers and catching a few waves, Nancy comes across the carcass of a whale floating near her and finds herself in the feeding ground of a very large and very mean great white shark. Wounded and trapped only a few hundred yards from the beach, Nancy fights the elements, the tides, and a big fucking shark in hopes to survive.

This is a (wo)man vs. nature story at its simplest. Apart from Lively talking herself through this problematic scenario, much of this film is simply hard core action with stakes that are most dire. There is an intensity in the way Jaume Collet-Serra makes this film as he gets the camera up close to Lively trapped on a rock yards from the beach and even into the mouth of that horrifying shark. There is not much by way of quiet and calm moments here. Even though a day passes in the timeframe of the film, there is never a moment that felt dull or pointless. The lead in to this perilous situation is short and quick, but even then, Collet-Serra manages to show us things you haven’t seen before by going into the surf and watching these surfer do their thing under and above the waves. One of the more terrifying techniques the director used to make me need a new change of underwear was the way he places the camera right on the crest of the water, so we as the viewer get to peek quickly under the waves. Knowing this is a shark movie, I knew a shark was coming, so every time Collet-Serra gives us a glimpse, I found myself scanning everything I could see in order to make sure the coast was clear. This technique is used throughout the film and it got me on edge every damn time.

While JAWS may be a fantastic film, there are scenes where the shark just doesn’t do it for me. It was a sign of the times and while it still manages to terrify my, I was hoping and waiting for a film to come along and make a scarier shark. While JAWS remains king, I dub THE SHALLOWS queen of the shark movies given the gender of its hero and the shark in this one is pants-shittingly horrifying. Again, by using the continuous undulation of the waves and putting the camera right on the edge of the water, Collet-Serra embraces the element of surprise and allows for some moments where the shark leaps right out of the water and into your face. See this film with an audience if you can. I don’t think I have ever heard screams as loud as the ones I heard from the audience while watching this movie. The attack scenes are nightmare fuel and as I write this review the night of seeing it, I don’t look forward to going to bed tonight. I’m sure the shark was CG, but it looked amazing and terrifyingly real all the way through.

Collet-Serra even references JAWS, but not in an annoying way. Imagine if the whole of JAWS took place in the first segment with the girl swimming at night and that buoy. That’s pretty much what THE SHALLOWS is. The buoy itself plays a major role in this one and makes for the setting of one of the most brilliant climaxes I’ve seen in ages as Nancy clings to it for dear life as the shark batters away at it from all sides. 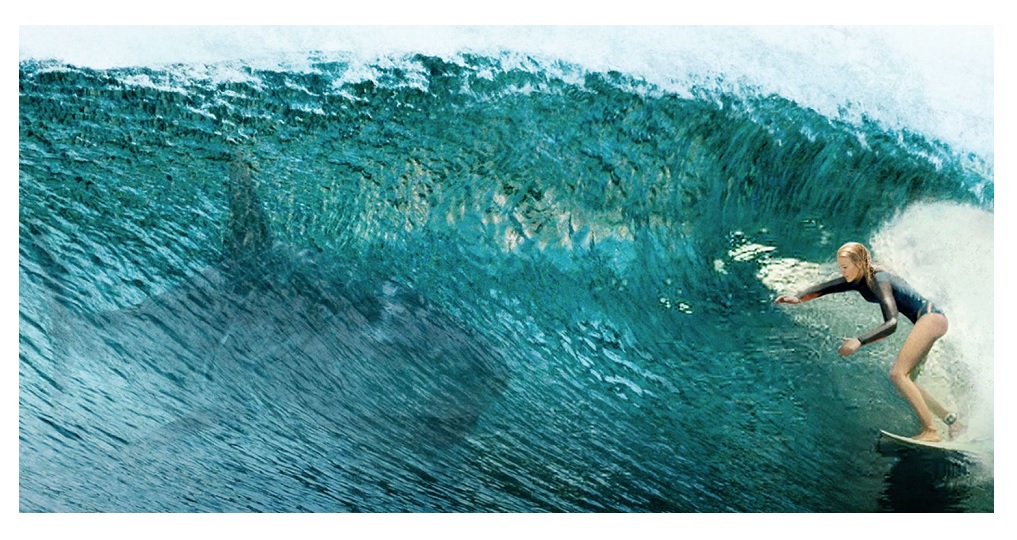 One of the things I often see folks criticizing mainly the JAWS sequels and less of the original is the fact that the shark develops a human-like hunger for revenge, which makes things feel less believable. While the shark is relentless in THE SHALLOWS, it feels less angry as it is simply always hungry and prefers moving prey rather than the carcass of the whale which is floating just a few yards away from Nancy. Sure the shark is determined to get Nancy, but it never feels like it is anything more than an animal looking for its prey. For Nancy, this story is personal. But in this film, the shark’s motivation seems to purely be hunger, which makes it feel less contrived and more believable.

Marvel movies blundered big time by choosing Brie Larson for their CAPTAIN MARVEL as Blake Lively proved herself as a tough as nails action star that can carry a movie charismatically and capably. She’s absolutely gorgeous and scrumptious in a bikini, but despite her beauty there’s a thoughtfulness and likability to her sincere smile, her furrowed brow, and her gritted teeth here. While there are bigger movies out there this summer, nothing has yet topped the experience I had watching THE SHALLOWS. Lively proves she has star power to the max here and director Collet-Serra shows us that there can be more than one shark in the shark movie subgenre. I absolutely loved this film and hope people go see it this weekend. It will definitely make you rethink that beach vacation and have you thanking that you are walking out of the theater on dry land. 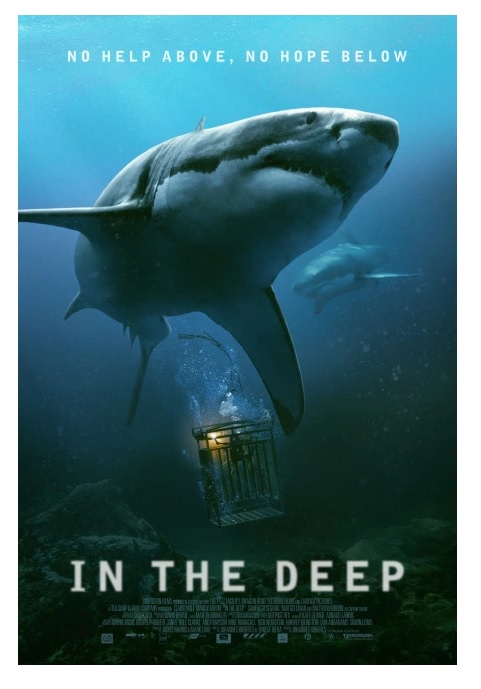 Worth noting: IN THE DEEP!
So I can’t get clarification on this film. Was it released or wasn’t it? I got a screener copy and was told it was to be released, then I hear that this trapped in a shark cage nail-biter was shelved so it could be released in theaters next year. I can’t even find a trailer for it. Either way, this one has a lot of intense scenes going for it and I feel the ending is even better than THE SHALLOWS. If it wasn’t released, look for this one on my list next year as this is one solid little shark flick. Check out my full review of the film here and you can find it here on Amazon here. !

THE COUNTDOWN SO FAR…