#10 – KRAMPUS - #10
Why is KRAMPUS #10? TRICK R’ TREAT’s Michael Dougherty’s attack on another holiday hit right at the perfect time last December. While there are all kinds of Hollywood conventions, I rather loved the animated sequence, the battle through the snow and attic, and all of the horrific familial interactions. While I had issues with the way the monster itself looks, I thought the dark ending really worked, giving the younger kids their happy ending, while adults could understand that everything isn’t ok in the end. Add a strong cast of comedic actors, and this is a big budget horror worth recommending. You can find it here on iTunes and Amazon here. Here’s my review of KRAMPUS from December 8th, 2015! 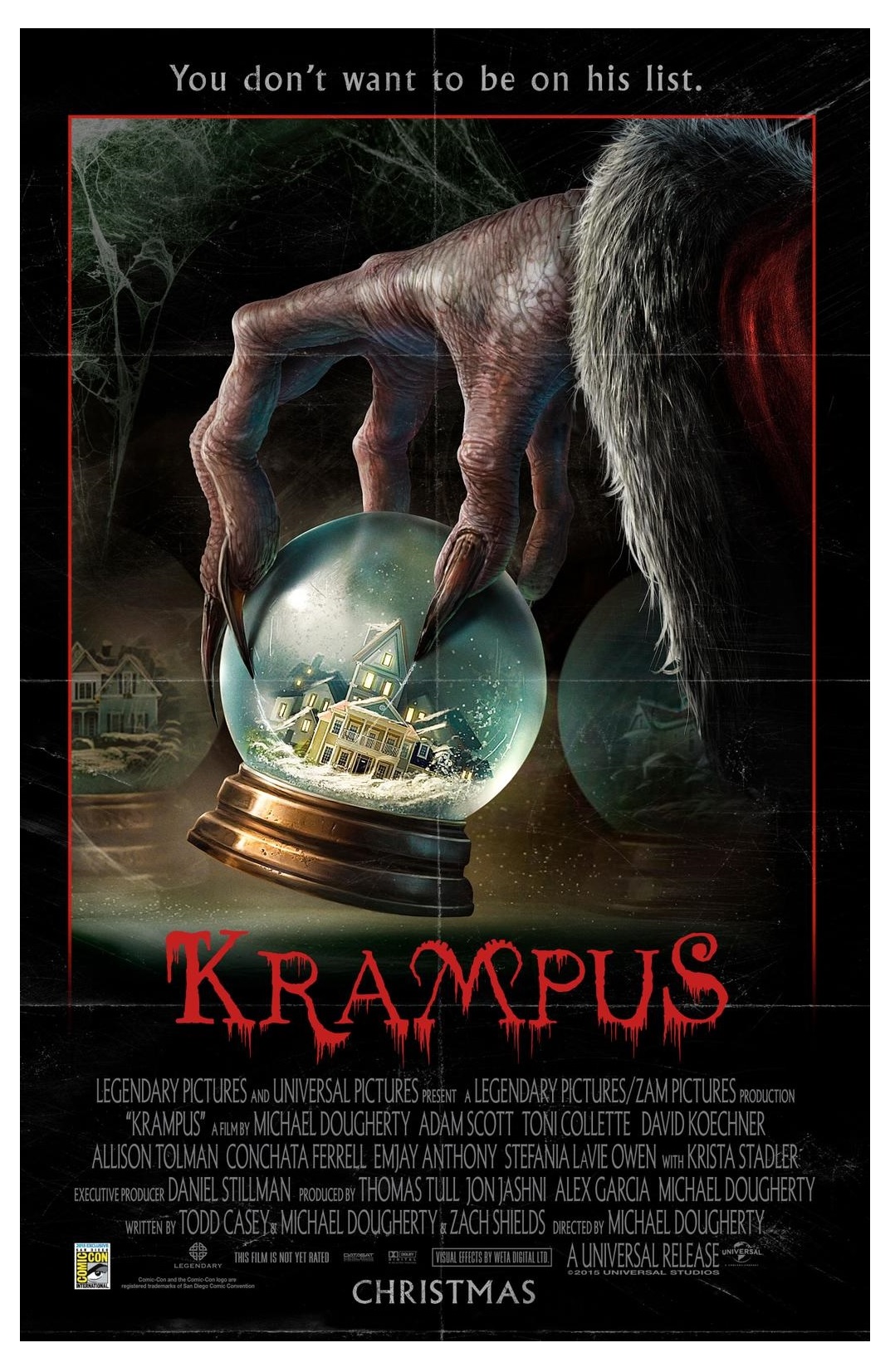 While I’m going to have to get some perspective on it, I will say that Michael Dougherty (TRICK R’ TREAT) has made yet another (mostly) great holiday horror film. 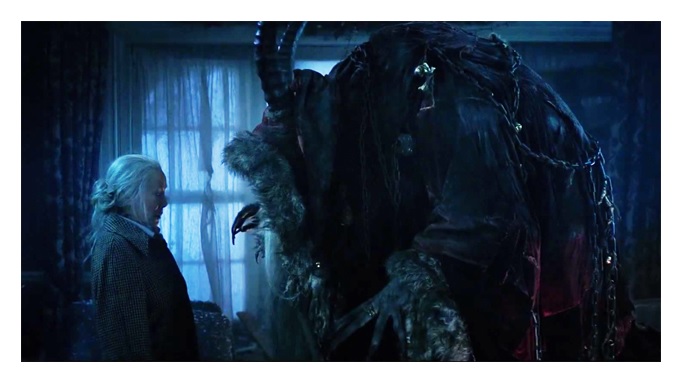 Christmas these days seems more of an arduous task than an actual holiday with so many traditions to uphold, it’s hard to just sit back and realize what it’s all about. That’s pretty much the message KRAMPUS is trying to tell you as it follows young Max (Emjay Anthony) the sole believer in Christmas spirit in his family which is comprised of father Tom (Adam Scott), mother Sarah (Toni Collette), sis Beth (Stefania LaVie Owen), uncle Howard (David Joechner), aunt Linda (Allison Tolman), drunk great aunt Dorothy (Conchata Ferrell), three horrific cousins, and sweet grandma Omi (Krista Sadler). Max is growing up and seeing the way his family acts around Christmas time makes the young boy sad as he remembers when Christmas was the most magical time of the year for him. Writing one last note to Santa asking for everything to be like it used to, Max becomes frustrated and tears up the note and tosses it into the night sky, unknowingly unleashing the fury of the Krampus; a not-so-mythical Anti-Santa who punishes the naughty rather than rewards the nice. Trapped without electricity or heat by a sudden blizzard, the family must band together (and maybe learn a little bit about the important things about Christmas) as the Krampus and his minions attack their not-so-happy home.

There’s an overall sense of sweetness that goes on through this entire film. From the slo mo montage of shoppers barreling through the doors of a store and running a violent gauntlet to get the latest Christmas deals in the opening, to the bucking of all holiday traditions because people are too busy or self absorbed to care, this is a film through the eyes of a child. Often referred to as an Amblin-esque sort of film, KRAMPUS feels more along the lines of TIME BANDITS in tone than anything like EXPLORERS, because there is a undercoating of pure evil to this film that those with more starry eyes may refuse to admit. People die in this film…horribly. And it really is a rather true and sad reflection of the times we live in that the actions of many of the characters in this film are pretty realistic. The ending especially is pretty diabolical in nature and had Dougherty chosen not to go this way with the wrap up, I might not have had such a favorable feeling about this film for its conviction to stay dastardly all the way through.

From a story perspective, I think there are some problems here. Dougherty seems to have a lot of fun highlighting the Griswald-esque shenanigans that are going on and illustrating why these folks are Krampus worthy. I don’t want to say it’s not entertaining. I laughed quite a bit at this portion of the film as it did, sadly, hit close to home numerous times. But while the film takes its sweet time soaking in the talented and comedic character actors playing these horrid people, it kind of forgets to establish what the Krampus is and what its powers and limitations are until later in the film. This makes things feel rather rushed in the climax in order to catch the viewer up as well as come up with the Krampus’ “undoing” in the end. In doing so, things get rather murky at the end as what’s left of the family take on the Krampus. Add that to the rather quick way each of the family members meet their end in the last half hour and things begin to feel a bit uneven here.

It’s not for lack of trying. There’s a fun animated bit in the middle as Omi (Sadler) explains what the Krampus is. I loved the animation in this film which looked like Christmas cartoons of old mixed with folksy paper puppetry. But this again seems to come a little too late in the game. This discourse as to who the Krampus is and how he was once defeated needed to be earlier so things could have felt a little more organically. 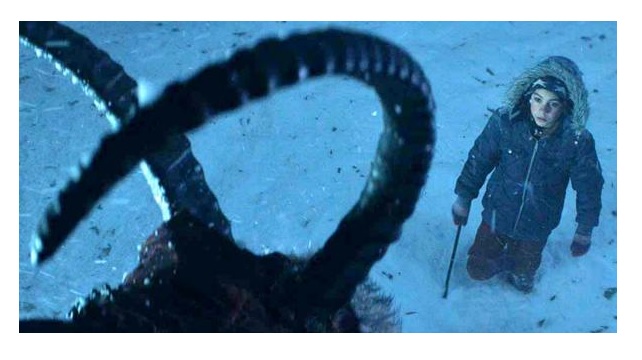 Effects wise, the film is pretty amazing. They seem to go practical for a lot of the effects which is a lot of fun seeing the monsters in the frame and attacking out horribly family. The toys and elves who accompany the Krampus were seriously awesome and nightmarish and Dougherty does a great job of both working in some creative and terrifying scenes highlighting each of Krampus’ monsters.

I have mixed feelings about the Krampus himself. While I love the overall design and silhouette of the monster with its hunched back, hoofed feet, and swirling horns, the face of the Krampus, which is hidden from us for most of the movie and from the public eye until its release has some issues. The main problem is that the face of the Krampus is simply another mask. So basically the movie keeps us from seeing the face of the monster for the entire thing and then when it does show it, it turns out to be a mask. This looks menacing in stills, but whenever the camera lingers on the Krampus’ face for too long, the fact that it’s a mask covering up the real face makes it look kind of goofy. So while the form of the Krampus works, the big face reveal is a bit of a letdown.

That said, despite the fact that there’s a hiccup in the pacing and some snags in the Krampus face, KRAMPUS is a crowd pleaser of a film. It’s not too scary as to frighten away mainstream audiences, but it does have a diabolical kick to it that will make hardcore fans appreciate it. Filled with fun action and horror sequences and an even portion of sugar and spice, just as Doughtery’s TRICK R’ TREAT was something fun to find in your candy bag on Halloween, KRAMPUS is just as much a fun surprise to find under the tree. 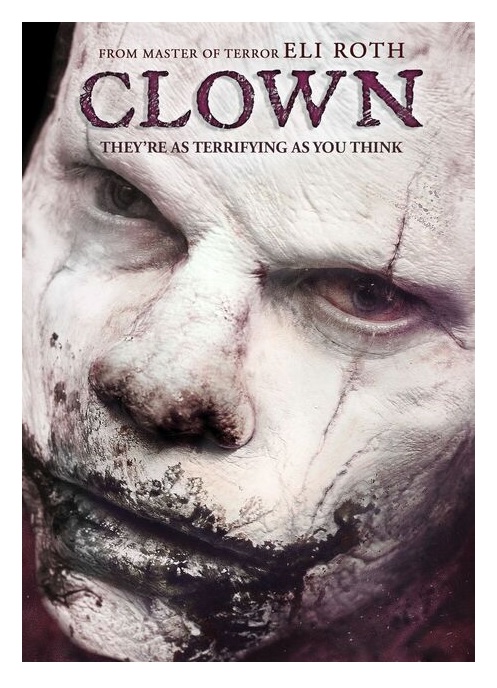 Worth noting: CLOWN!
I go back and forth with this film. I admire the mythology at play, Peter Stormare’s performance, some of the gore, and the black humor at play. Then again, it’s a very grimy film that seems to lack any kind of vitality. In the end, CLOWN left me feeling kind of dirty after seeing it, which is to say that it is a film that made me uncomfortable and that’s what horror is all about. That’s why I am going to mark CLOWN down as “Worth noting.” I want to like it, but for some reason, I don’t know why I don’t. Let me know your thoughts on this odd film from the director of COP CAR and the upcoming SPIDER-MAN movie. Check out my full review of the film here. You can find it here on iTunes and Amazon here!