#11 - AVA’S POSSESSIONS - #11
Why is AVA’S POSSESSIONS #11? Because it is a completely original idea in a subgenre of horror (the exorcism genre) that is so often uninspired and unoriginal. Starting out with an exorcism, AVA’S POSSESSIONS comically answers the question; how does one put ones life back together after being taken over by a demon? And once the demon is gone, do you think you would miss him? These questions and more are answered in this quirky and offbeat possession tale. You can find it here on iTunes, Netflix here, and Amazon here. Here’s my review of AVA’S POSSESSIONS from March 5th! 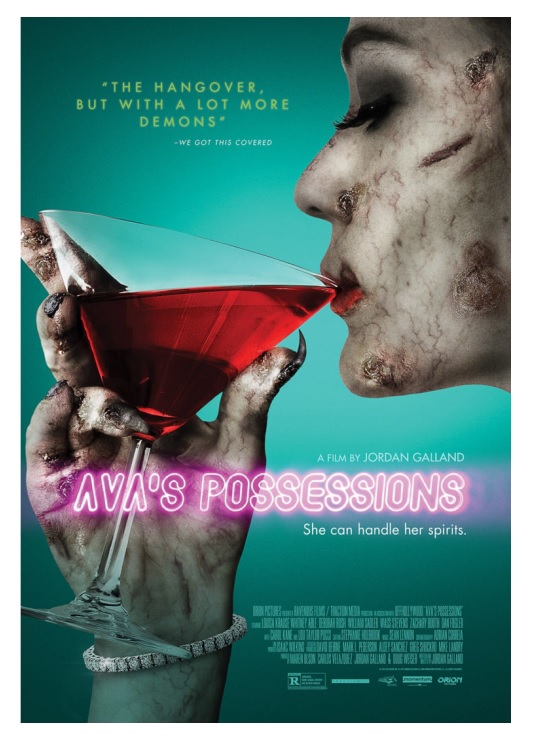 A fantastically original concept, a stellar genre cast, and a very cool tone makes AVA’S POSSESSIONS the most fun you’re going to have at an exorcism this year!

Ava (Louisa Krause) was possessed by a demon named Naphula, but don’t worry, she was exorcized and it’s all good now. Well, not all good. Not remembering the crazy shit she did while possessed, Ava now must try to put the pieces of her life back together. But the holy terror she unleashed while under the demon’s thrall left her with much to atone for, so her lawyer (Dan Fogler) gives her the option of jail time or signing up for a program called Spirit Possession Anonymous, a self help group for people who have been possessed like her and are trying to move on. But with the demon continuing to beat at her subconscious, the pieces from the blackout coming to light, her friends and family tiptoeing around her in fear that she’ll have a relapse, and the members of the group trying to convince her of the positive aspects of being possessed, Ava finds moving on to be pretty difficult.

I absolutely loved this quirky little film. I constantly am looking for films with stories I haven’t seen before, and AVA’S POSSESSIONS is one of those films. Every exorcism movie seems to spend the bulk of its time with its lead strapped to a bed and thrashing around while a priest is compelling them with Christ’s power and it ends with the possessed rid of its demon and her family gathered around crying in relief. AVA’S POSSESSIONS gets through all of that in the opening credits and leaves the rest of the film to answer the burning question; “Now that the demon is out of my body and no longer causing me to spit pea soup at people, how do I put my life back together?” Ava is faced with this problem, and the film goes about answering it in fun and scary ways. This is not a comedy, though. There are comedic elements. Lousia Krause plays Ava as a snarky and funny person, but she is also someone whose actions have completely destroyed her life and now, not knowing everything she has done, she must try to put it back together, and it’s fun to see her do this. The comedy doesn’t really come out as if we are laughing at Ava through her troubles. The comedy comes from the cleverness of using possession as a metaphor for any kind of addiction where a person wants to change who they are and was once a person not in control of their actions. It’s a resonant theme and one that has its moments of heft. Still, seeing therapeutic exercises of the possessed playing in sand trays with toy demons, popping balloons with demons faces sharpied onto them, and cathartically facing their actual demons in self help groups is downright fun.

Krause is amazing in this role, jumping between self pity and laughing at the situation she finds herself in. She plays it all straight, as a woman who first can’t believe she was actually possessed and second can’t really buy into this possession therapy crap. Seeing her come around through successes and failures makes the character absolutely endearing. The rest of the cast is great—from character actors William Sadler and Deborah Rush playing Ava’s bruised and battered parents, to Fogler’s likable lawyer, to the always fun Carol Kane as a mystic, to the potential romance for Ava with SPRING’s Lou Taylor Pucci, to Ava’s misguided group-mate (Geneva Carr) who sees possession as a good thing. The whole cast is filled with names and faces you’ve seen before and gathered here together makes for a fantastically acted film.

If there’s a weakness in AVA’S POSSESSIONS, it’s that it seems to drop a bombshell into the script a bit too late in the game and there’s not a lot of resolution to it by the time the bomb is dropped. AVA’S POSSESSIONS feels like, at one point, it might have been the pilot for a series, as there is a lot going on in terms of Ava’s relationships with this broad cast. I wanted more development with these characters in relation to Ava and I simply wanted more of this film. Still, I can’t recommend this film more. The humor is spot on and works every time, the scary parts are effective as well, and the soundtrack, done by Sean Lennon, makes the whole film feel as unique as the premise. AVA’S POSSESSIONS doesn’t waste its time on territory well tread. It’s a film that blazes new trails in the horror genre and deserves your attention. Highly recommended for its unique story, amazing cast, and metaphorical heft. 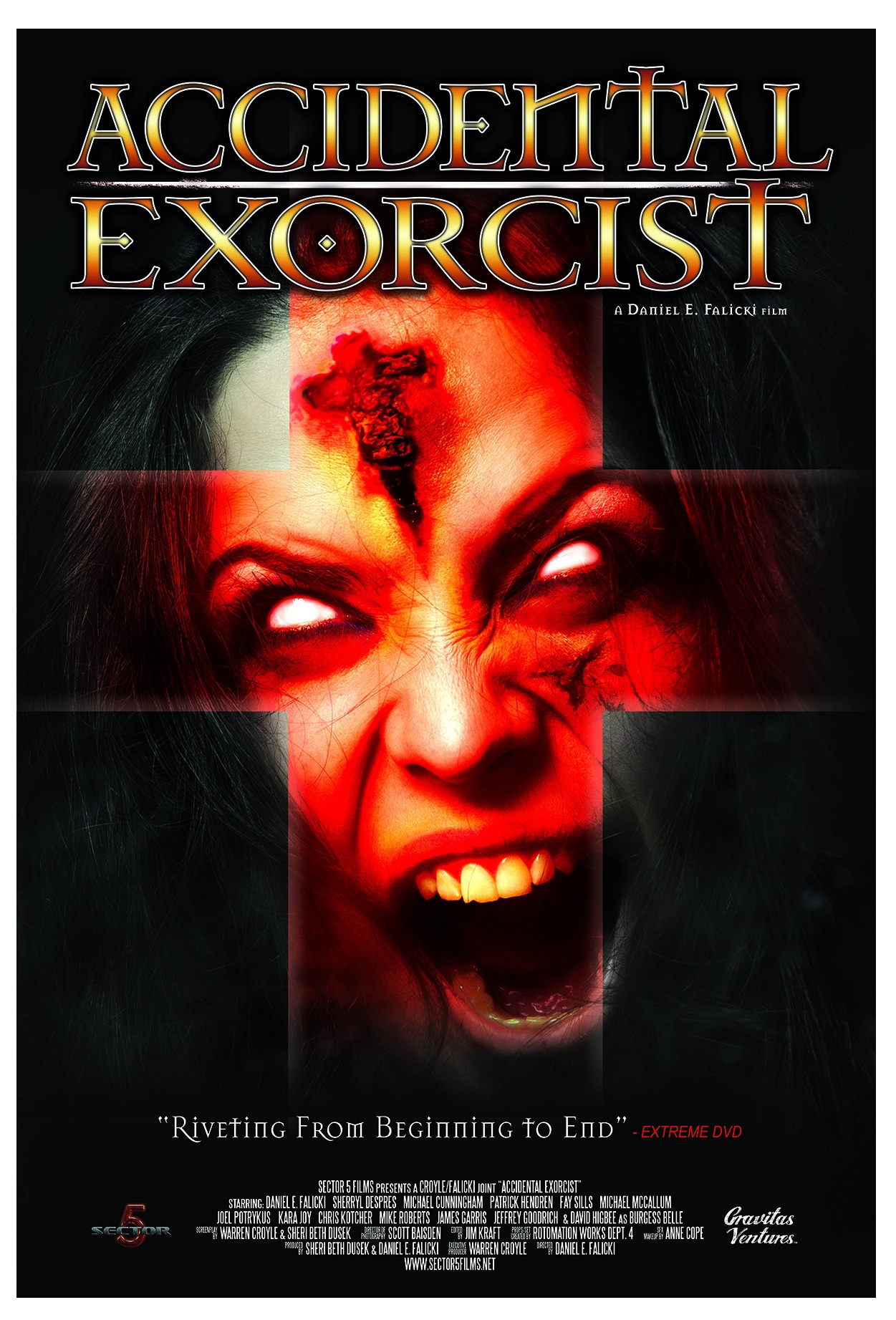 Worth noting: ACCIDENTAL EXORCIST!
While this one keeps the budget low, like AVA’S POSSESSIONS, it attempts to do something new with the exorcism subgenre of horror. Too many time we have seen a girl strapped to a bed with priests compelling Christ around her. Films attempting to something different should be recognized and that’s why I want to point out ACCIDENTAL EXORCIST, as it follows a man with the unlucky talent of getting rid of demons from possessed people, though the wear and tear is so great on him that he resorts to alcohol and drugs to cope. While the film is not the most uplifting tale you’re going to see, it does shed light on the exorcist as the real victim of these demonic ordeals as writer/director/actor Daniel Falicki exemplifies with fantastic precision. This is a low budgeter, but one that suggests and amazing talent in those in front of and behind the camera. Falicki is bound for greatness if this film is any indication and you can say you were one of the ones who saw him first if you check this amazing descent into hellish madness. Check out my full review of the film here. You can find it here on iTunes and Amazon here!