#15 – DEATHGASM - #15
Why is DEATHGASM #15? Anyone who was a metalhead or dreamed of being a metalhead in high school is going to find something to love about DEATHGASM, an ode to dreaming big and falling even bigger. It’s a comedy of errors with a likable cast of midfits and while I was hoping for a bit more development from the other two members of the band we follow into Hell and back, this is one rollercoaster of a film that no horror fan should miss. You can find it here on iTunes, Netflix here, and Amazon here. Here’s my review of DEATHGASM from January 8th! 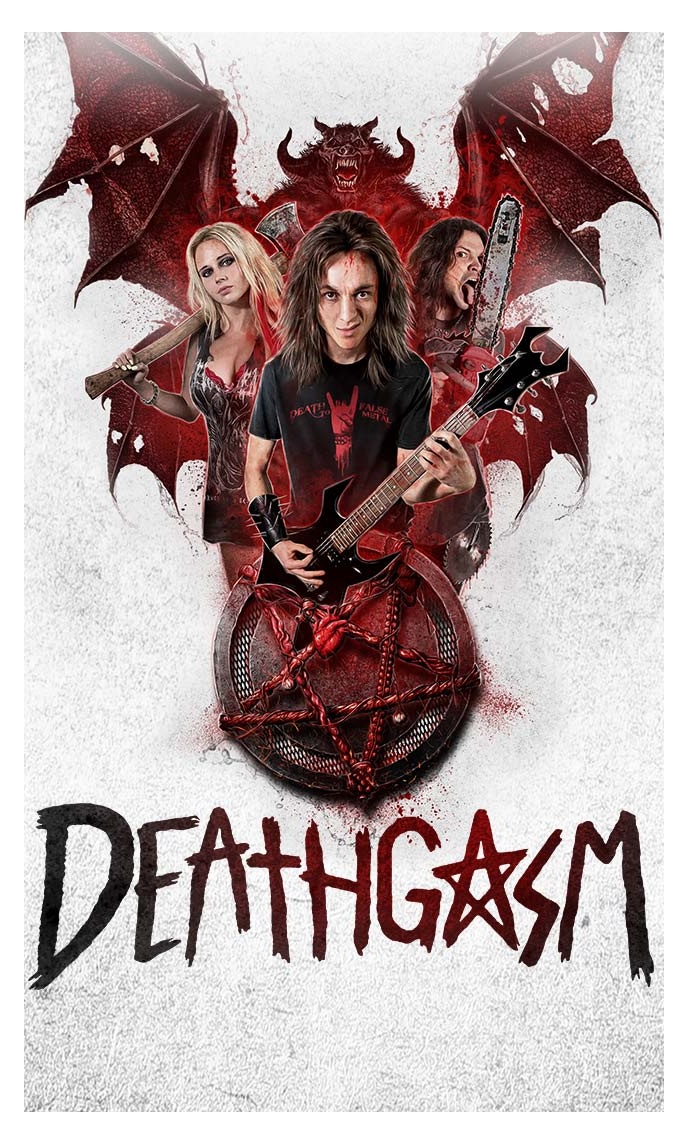 Did you used to draw disturbing shit on the front of your Trapper Keeper? Did you grow your hair long in high school? Did you used to (and maybe still do) listen to metal and rebel against the poofy pop the rest of the world called music? If you answered yes to any or all of these questions, DEATHGASM is the film for you. 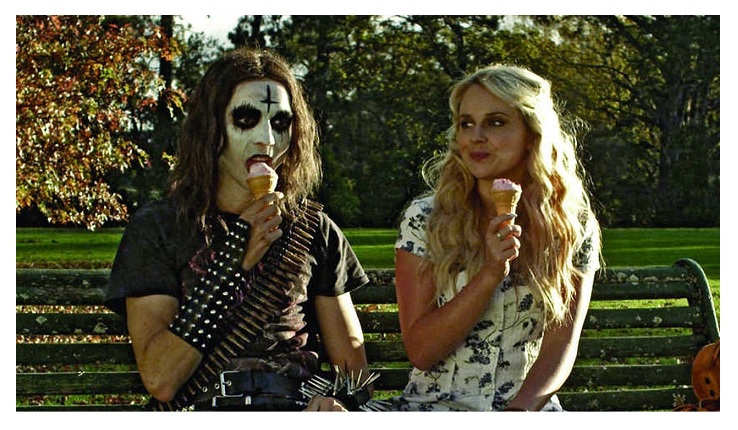 BLOOD PUNCH’s Milo Cawthorne stars as Brodie, a metalhead outcast at his school forced to live with his bible-thumping uncle and try to fit in as the new kid at school. Brodie befriends some outcasts, including the very Buddy Revell-esque rocker Zakk (James Blake), and start their own death metal band, much to the disdain of his uncle. When Zakk gets word that his favorite rocker Rikki Daggers (Stephen Ure) lives in their same town, they decide to break into his house and check it out. Unbeknownst to them, Daggers has made a deal with a devil cult and is in possession of sheet music that can open a portal to hell. In order to keep the music hidden, he gives Brodie and Zakk the music and the metalheads accidentally open a gateway to hell, unleashing the netherworld upon their quiet, boring suburb. Meanwhile, Brodie is trying to win the hand of out-of-his-league preppie gal Medina (Kimberley Crossman), his asshole cousin’s girlfriend.

From beginning to end, this film is simply fun. Filled with death metal and gore, this film is a love letter to those who live outside of the norm and ever felt out of place in high school (which I’m assuming many of the readers of this column have felt a time or two). While at times the film becomes rather predictable in terms of the outcast first finding friends, then finding purpose, then finally getting the girl, it’s the details that make it all so much fun. 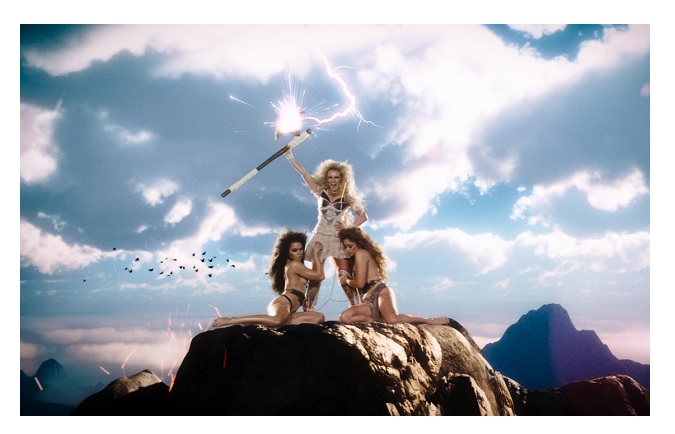 The devil is really in the details here, as this film is filled with memorable moments. Sure some moments involving the animation may have been swiped from SCOTT PILGRIM, but it’s still fun seeing the letters come alive when the band debates on what to name themselves. Brodie occasionally flashes to delusions of a hard rock reality full of swords, battleaxes, and babes in metal bikinis on the top of a mountain. Simply having a scene where Brodie and Zakk battle demons with his uncle’s sex toys is absolutely amazing. Everything is done with a wink to the viewer and a nod to those days of barely paying attention in class while doodling in your notebook.

And while this film is dripping with those nostalgic feelings, it’s also sopping wet with blood and gore as well. DEATHGASM is bathed in a level of grue only achieved in such gore classics as EVIL DEAD 2 and DEAD ALIVE. But while it’s gratuitous and sometimes downright shocking as to the level of violence and gore that is going on, it also never fails to be funny all the way through. Heads are split and lopped off, intestines are slit and dropped, all forms of weaponry including the power of rock are used to splatter blood in all directions in the latter portion of this one, and it’s all frikkin’ glorious! 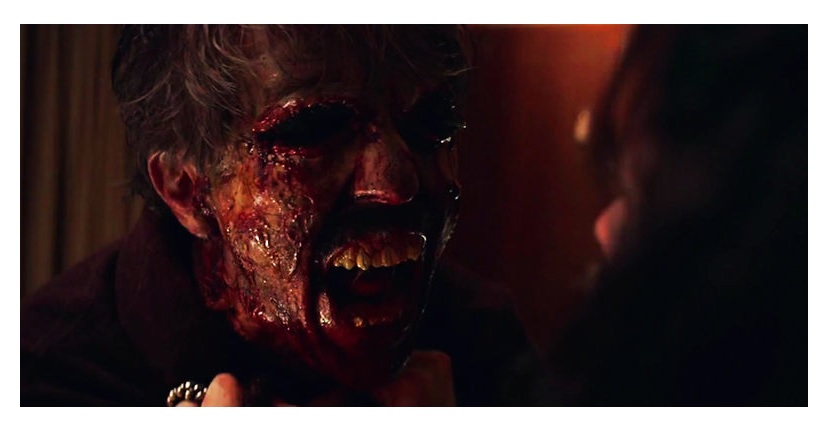 After seeing his inspired performance in BLOOD PUNCH and his role as Brodie here, this has been a stellar year for Milo Cawthorne, and while the actor isn’t what one would usually think of as a lead, he carries this film really well. Like a metalhead version of Peter Parker, it is fun seeing Brodie fail and succeed in this film. The rest of the cast, especially the ultra-tough James Blake and gorgeous Kimberly Crossman, do an amazing job of fleshing out the rest of this film.

DEATHGASM may not be for everyone, but in a perfect world it should be. Rockin’ down the street with its hair flowing and its balls out, this film is proud to be a metal armored gorefest and should be celebrated by all. I laughed quite a bit at the outrageous gore and funny little moments of these outcasts finding each other and taking on the hordes of hell. It’s the kind of horror film that makes you proud to be a fan of the genre, and definitely worth your while to seek it out. 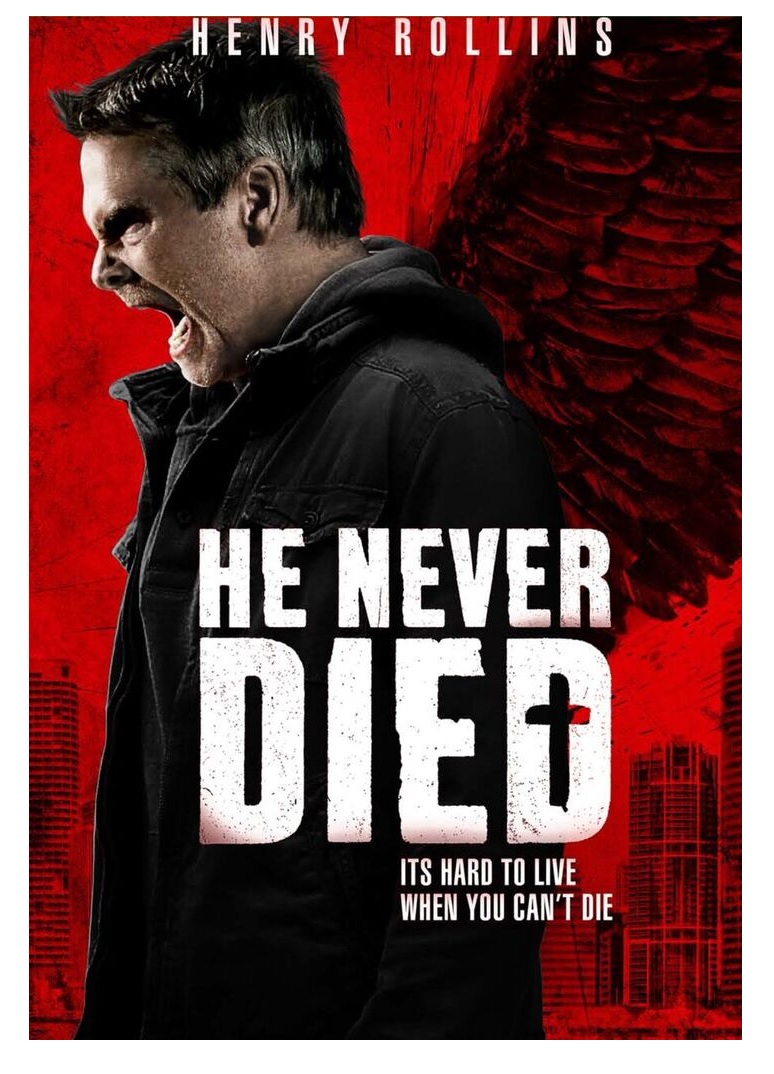 Worth noting: HE NEVER DIED!
Speakin’ of rockin’ and rollin’, rocker Henry Rollins made an impact this year with two cool films, the the wicked heist flick THE LAST HEIST and this film, about a man who may or may not be a fallen angel, though his tolerance to pain and seemingly supernatural strength suggest the former. Rollins gives a subtle and quietly menacing performance here. It’s rumored to be the beginning of a series of films with this character and I hope we see more, as it really is a fun little revenge with a fantastic performance from Rollins. Check out my full review of the film here. You can find it here on iTunes, Netflix here, and Amazon here!