#20 – CARNAGE PARK - #20
Why is CARNAGE PARK #20? Because it exemplifies not only the tone of a classic Grindhouse feature, but also a similarly grungy smarm to the acting and the was the story plays out. The film is not a perfect one, but one that shows how director Mickey Keating is growing with each film he puts out (he’s put out three in the last two years). Keating is a filmmaker I am keeping a close eye on as every film he makes is able to entertain as well as hit the viewer on a gut level. CARNAGE PARK is the kind of ode to drive in theater fare that I miss in horror these days. You can find it here on iTunes and Amazon here. Here’s my review of CARNAGE PARK from September 30th! 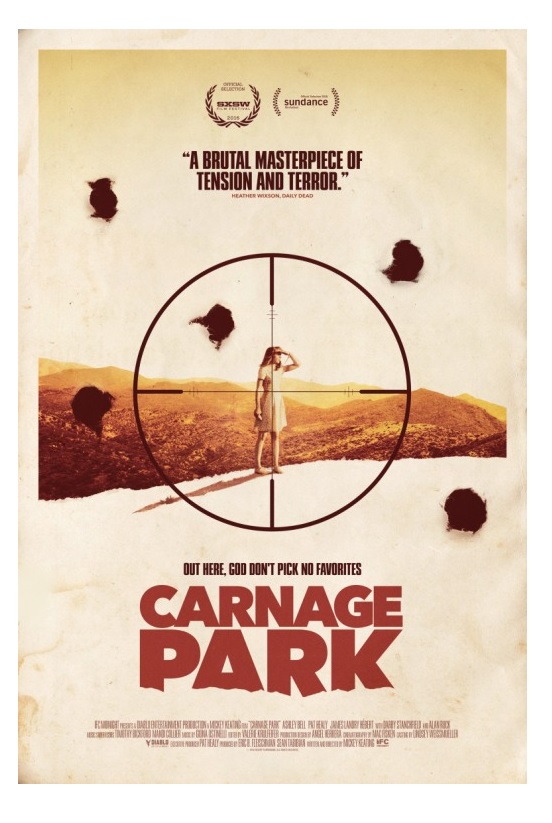 While the film is derivative of many a movie you’re bound to know, CARNAGE PARK offers up a glimpse of what DARLING and POD director Mickey Keating is capable of given a bigger budget. Keating keeps things relatively small scale, but still manages to get great performances out of his actors as well as keeps the pace of this gory heist road movie at a breakneck pace. 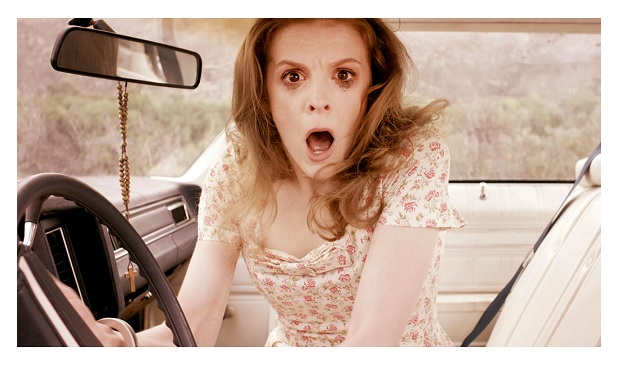 A pair of villainous types make their way through a desert, one of them is shot and screaming and everything from the way the shot is set up to the dialog is straight out of RESERVIOR DOGS. Apart from Keating’s previous works, where there are similarities to other films such as REPULSION with DARLING, this homage is obvious as it apes the opening scene of this iconic movie. With this scene, some folks might scoff at Keating for imitating a truly iconic movie. Personally, I think this is where the genius lays in CARNAGE PARK. It definitely pays homage to films like RESERVOIR DOGS (which in itself is an homage to many a film), but it also plays with those expectations one might have with these films. Just when you think you know where this film is going to go, Keating veers off course and turns all expectation ass-upwards. Keating is paying homage more to the films that inspired Tarantino like Fredrick R. Friedel’s AXE and KIDNAPPED COED here and that distinction makes CARNAGE PARK so much more than a knockoff one might have found in the bargain bin at Blockbuster in the nineties. Keating’s film has a grit to it, from the choice of secluded desert scenery for the bulk of the film to the grimy way the caracters portray themselves, to the warped music played through the loudspeaker that echoes across Wyatt Moss’ (CHEAP THRILLS and THE INNKEEPERS’ Pat Healy’s) property.

Turns out these no-goodniks have wandered onto Wyatt Moss’ property unknowlingly and he meets trespassers with the business end of a sniper rifle. After taking out the vehicle of Scorpion Joe (LOOPER’s James Landry Hébert) and the wounded Lenny (Michael Villar)—aka the two no-goodniks, we find out they have kidnapped the debutante daughter of a well to do businessman named Vivian (THE LAST EXORCISM’s Ashley Bell). Just when you think this is a movie about a kidnapping, captor and captee must team up to survive against a mad sniper (Healy). Meanwhile Wyatt’s brother (FERRIS BEULLER’S DAY OFF’s Alan Ruck) toils over whether or not his brother has finally crossed a line he cannot cover up and battles his conscience to take him out. The story turns into a cat and mouse game where Healy’s Wyatt takes aim on everyone. 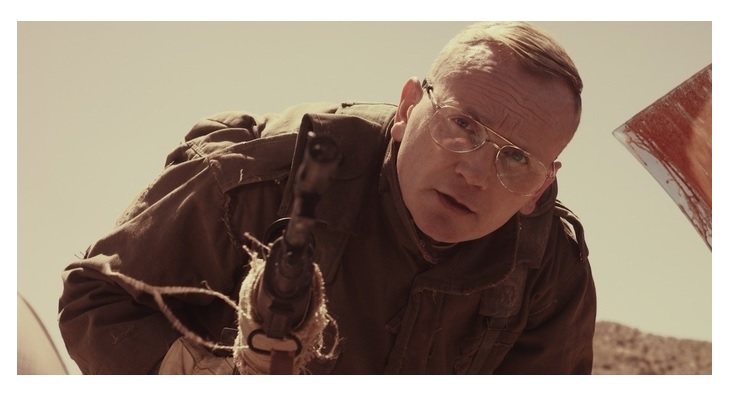 It is Pat Healy who really shines in this film. Often cast as the nebbish good guy, here he is a bonafide madman, laughing at voices in his head and taking way too much joy in the hell he unleashes upon the rest of the small cast. Healy is fascinating and terrifying, in many ways like the lived in characters of Tobe Hooper’s TEXAS CHAIN SAW MASSACRE. He is a character that has so much more story in him that this single nightmare allows, but gives little to nothing back in terms of how he ended up as this madman with a rifle. Ashley Bell is, as always, awesome as Vivian, somewhat pampered rich girl, freaking out from this situation, but showing a lot of gruff and tough when her predators show a moment of distraction or weakness. It is truly fascinating to follow Healy and Bell through this obstacle course from hell.

CARNAGE PARK ends abruptly. Again, harkening back to the age of rogue cinema where proper cinematic tropes are ignored. While I want to praise this film for the ballsiness of simply dropping the mic and walking away, most likely, the budget ran out and the decision to simply roll credits was necessary. Still, this reminds me of the startling endings of some of the best grindhouse films which most likely ran into the same obstacle. CARNAGE PARK is Keating’s biggest film to date and proves that he can handle the open plain as capably as he does one setting, indoors films. I hope CARNAGE PARK opens the doors for bigger budgets and bigger ideas for Keating. I loved the attitude and feel of this film which accentuates its coolness with musical beats, surprise arterial explosions, and screams for bloody murder. It’s an ode to grindhouse in the purest sense that saves the scratched film filter and goes straight for the essence of what grindhouse is all about. Highly recommended. 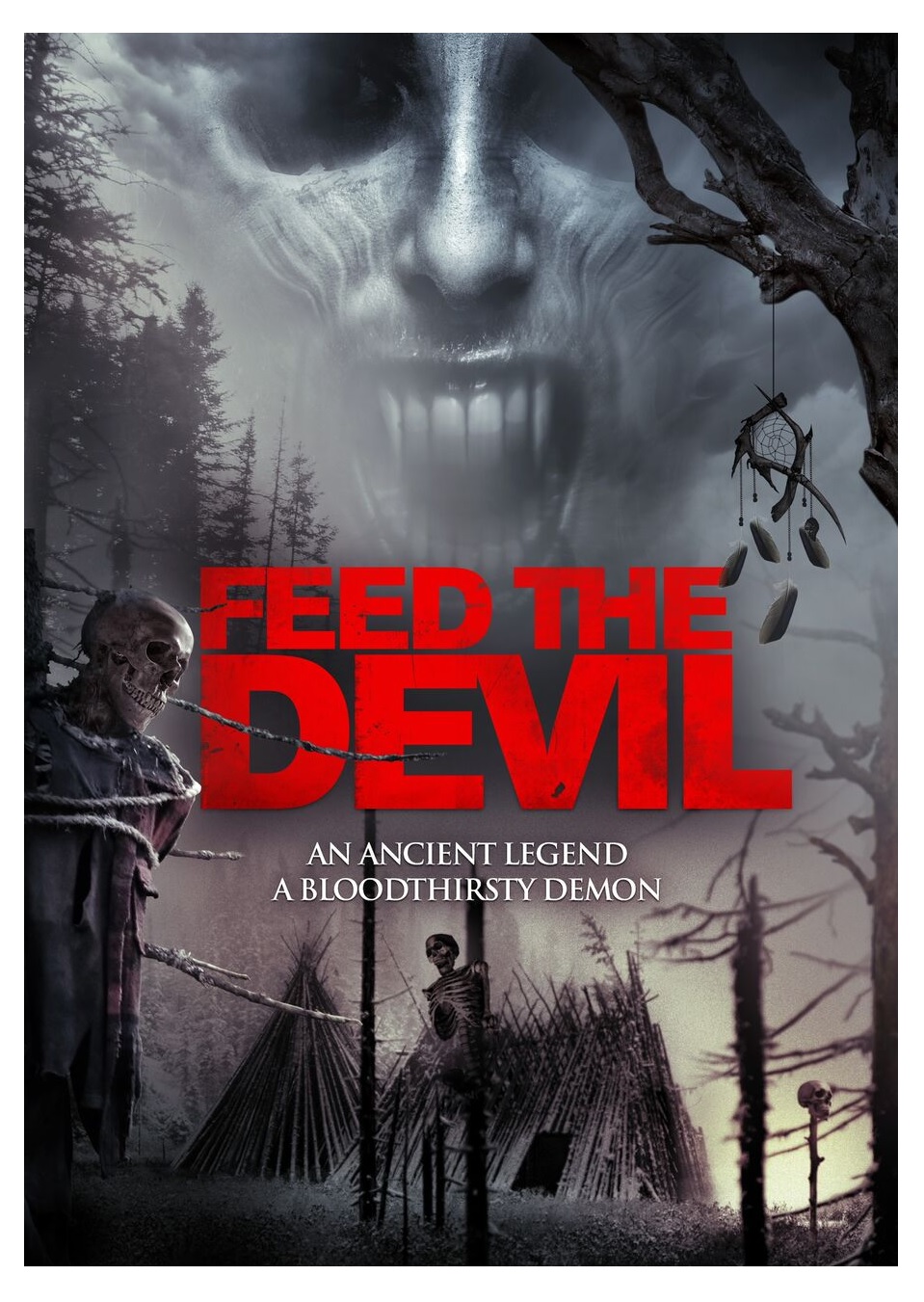 Worth noting: FEED THE DEVIL!
Another film about crooks wandering into the wrong place is FEED THE DEVIL, about a trio of bad guys start off looking for a secret field of primo weed in the middle of Native American territory and find themselves the target for a giant man-monster and his ghostly victims which haunt the woods. It’s another mashup of heist and horror elements that works mainly because of the strong cast and the utter hell the last act puts the characters to. This is a gnarly film more akin with DELIVERANCE than WRONG TURN. Check out my full review of the film here. You can find it here on iTunes and Amazon here!

Find more AICN HORROR including an archive of previous columns on AICN HORROR’s Facebook page!
Finally, if you are having trouble with the text running over the images, refresh the page and that should do the trick.
Follow aicn
Readers Talkback
comments powered by Disqus
Top Talkbacks
Trending