#23 – DARLING - #23
Why is DARLING #23? Loneliness is a powerful thing and it takes its toll on Lauren Ashley Carter’s character DARLING in Mickey Keating’s tribute to REPULSION. Filmed almost entirely in one location, DARLING once again shows Keating’s power to show the depths of darkness with very little budget. Carter is amazing here as her beauty and deadliness commands every second of this film. This is a subtle terror, one that isn’t going to break the bank, but the gorgeous look of the film as well as the patient insanity by inches method Keating and Carter tell this story makes it one of the most memorable horrors of the year. You can find it here on iTunes, Netflix here, and Amazon here. Here’s my review of DARLING from April 1st! 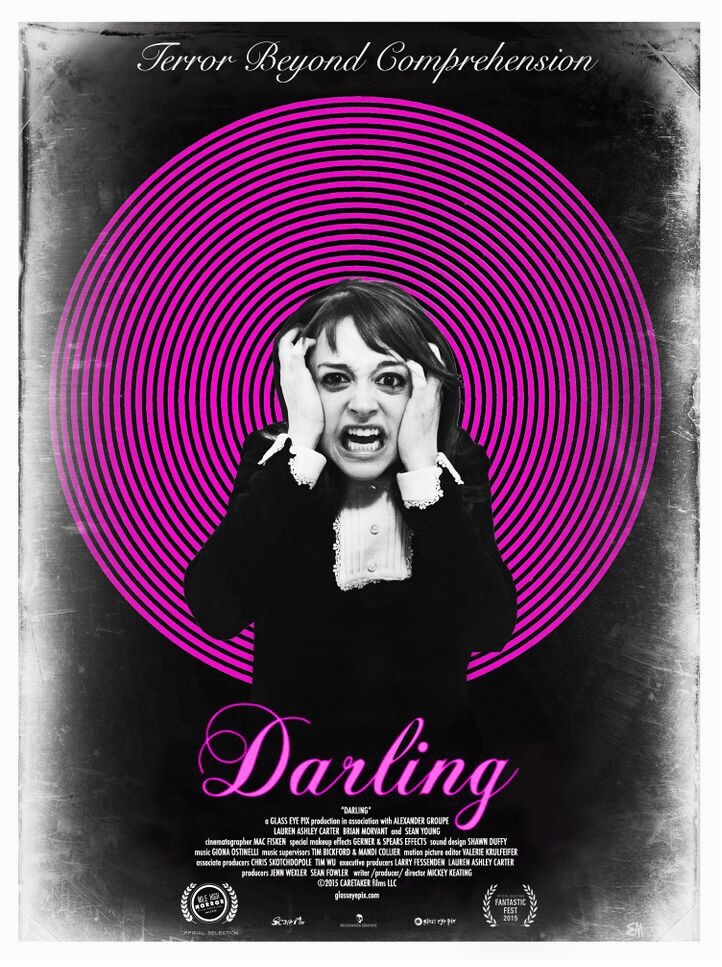 Mickey Keating is proving to be a force to reckon with in the horror genre. He’s currently dazzling folks at festivals with CARNAGE PARK. He knocked my socks off last year with the paranoid masterpiece POD. And somewhere in the middle he managed to film another one, the subject of this review, DARLING. 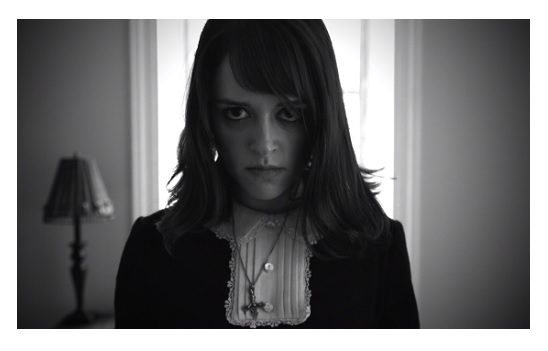 DARLING tells a simple descent into madness tale of a lonely girl named Darling (Lauren Ashley Carter, who is racking up quite the horror resume starring in THE WOMAN, JUG FACE, and the aforementioned POD) who applies for a job as a caretaker in a townhome in a big city. The owner of the building, simply called Madame (Sean Young, Carter’s co-star in JUG FACE), warns Darling that something horrible happened to the previous caretaker resulting in her death. Unfazed by this ominous warning, Darling takes the job and moves in. Immediately she finds a necklace with an upside down cross hanging from it which seems to belong to the previous caretaker, but that’s just the beginning of the spooky happenings as doors close, hallways shift, and Darling begins having visions of ghostly forms roaming through the rooms. Darling doesn’t run out of the place screaming, though. She simply ignores the obvious signs of haunting and remains in the building and, thus, slowly goes insane.

DARLING is Mickey Keating exercising his more experimental muscles. Some might call this film a bit pretentious as it is mostly dialog free, filmed in black and white, and doesn’t offer any easy answers for the viewer. Personally, I found myself transfixed by Keating’s choice in setting, elegant décor, eclectic music, and unique imagery he chooses to focus on rather than spoon-feed a typical narrative to us. Reminiscent of Polanski’s REPULSION, DARLING offers up a quiet and powerful view of a woman being swallowed up in a home due to her own paranoia (and a little bit of the supernatural), which eventually leads to her seclusion from the outside world and the destruction of anyone who enters Darling’s home. Despite its artsy delivery, the film is thorough in accentuating the deep dark descent into Darling’s madness. 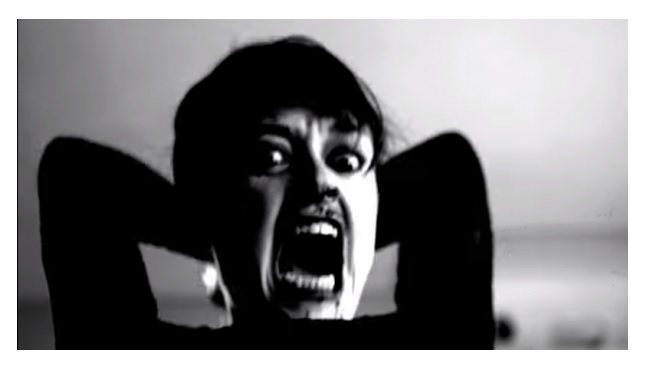 The thing that makes this film so transfixing is Lauren Ashley Carter, through and through. Carter is an absolute beauty, but also possesses a soulfulness most young actresses simply don’t possess. While she moves in a dreamlike trance through most of this film, reacting in a manner that is more and more alien as her soul seems to be sucked away by the house she is residing in, her eyes are hypnotizing and convey a sense of melancholy that simply touches the soul. Keating’s camera is obviously in love with Carter as he makes her look beautiful be she covered in tears, screaming in horror, or bathed in blood. Carter makes this film soar because of her simple presence in her quiet stare and giant sullen brown eyes. Carter is a gift to horror, and hopefully she is comfortable and stays in this genre as she is able to convey emotional depth while being a ravishing beauty all at once. Her descent is convincing here because she is so convincing every step of the way.

Less substantial than POD as it feels Keating was interesting in doing something simple in between the paranoid nightmare that was POD and the dark road trip film CARNAGE PARK, DARLING is powerful in its silence and beauty. Through Keating’s artistic lens and his threadbare story, DARLING’s resonance comes from its simplicity and the truly astounding star power of Lauren Ashley Carter. This one is not for big budget horror freaks, but if you like your paranoia at a personal level, DARLING will definitely fill the bill. 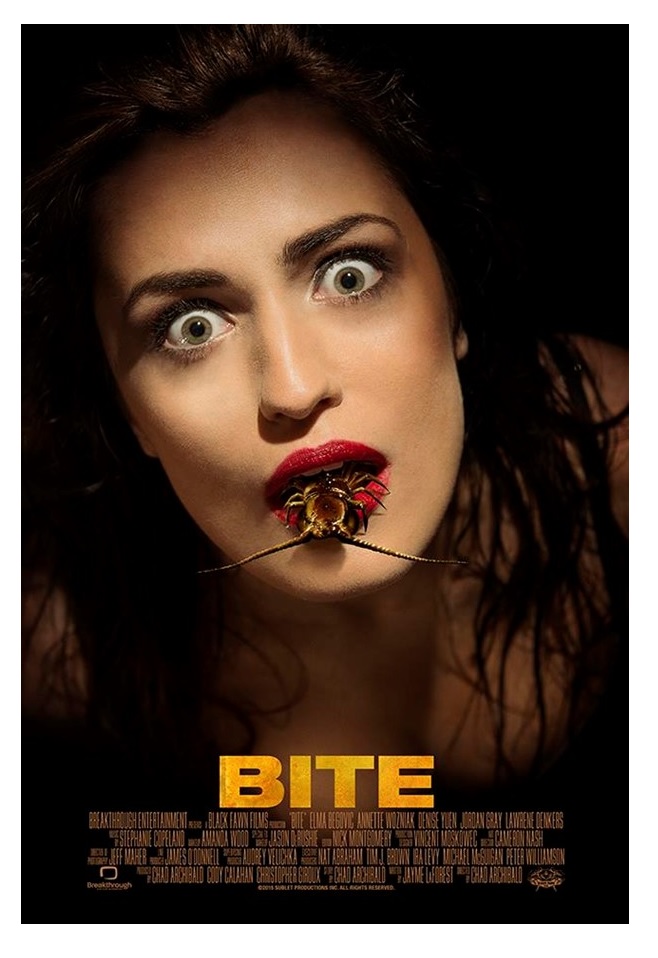 Worth noting: BITE!
There are plenty of allegories for STD’s that have been released in horror for the last few years. I guess, in this day and age where health care is a new stressful thing in folks lives, do it yourself remedies and simple neglect to one’s well being is as prominent a theme in horror as it ever has been. BITE exemplifies that to a tee as a woman carries the guilt of having slept with a stranger on break before she decides to get married back home along with a wicked bug bite from a weird bug. What unfolds is reminiscent of Cronenberg’s THE FLY but done so with some truly disgusting practical and digital effects. Holing up in her apartment, the lead transforms from woman to monster in this memorable and horrific modern metamorphosis. Check out my full review of the film here. You can find it here on iTunes and Amazon here. !