Lee Majors discusses being Ash's dad and how shitty Rick Perry is at dancing in this Fantastic Fest interview!

Ahoy, squirts! Quint here. Lee Majors is awesome. Let's get that out of the way right up front. Yes, he's The Six Million Dollar Man, but he's also a no-bullshit straight shooter of an interview. This is a really fun chat.

Majors plays Brock Williams, the not-so-loving father of Ashley J. Williams in Ash Vs. Evil Dead Season 2. You see where Ash got most of his cheesy one-liners and dumbass attitude from right from the start of the season.

In the below interview we bond over darkly funny TV shows, he talks about taking the “curse off of horror” with comedy, his Houston tax shelter house and how shitty Rick Perry is at dancing. Told ya' it's a fun chat. Enjoy! 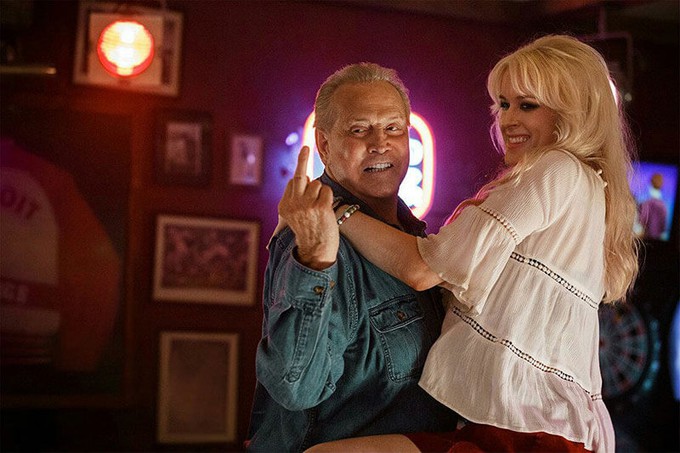 Lee Majors: What was your first name again?

Quint: It's good to meet you, too, sir. I'd like to start by asking you if you were familiar with the Evil Dead Universe before you were cast on the show.

Lee Majors: I heard of the movies back in the '70s and '80s, but I was so busy doing my own series at that time I don't remember seeing them. My career has never been horror or a lot of gory blood, so when they called me I thought it was interesting that they were asking. I said, “Let me look at the first season.”

So, I opened up my iPad and went through the 10 shows. By the time I got to the 10th show I was laughing my butt off because it was so damn funny! The humor took away from the horror. When he's chainsawing someone's head off he's throwing out these crazy lines that's taking that off of it. Batshit crazy is what I call it. I said, “I gotta do this. This looks fun!”

Quint: Have you seen the films?

Lee Majors: I saw a little piece of one at Paleyfest in LA, but then we had to do a panel and I never saw the end of it.

Quint: If you like the tone of the show I think you'll really dig Evil Dead II and Army of Darkness. Those are pretty funny. The first one's more of a straight up horror movie, but each movie is funnier than the one before it. Sam and Bruce injected a lot of Three Stooges style slapstick humor.

Lee Majors: I think you got to to take the curse off it, more or less. For me. Then they bring in a whole new audience. Some people will watch it for the humor, some will watch for the horror, so you get the best of both worlds. I just enjoyed the hell out of it. A'course I didn't know they were shooting it in New Zealand! It's a hell of a long way to go!

Quint: I've been there many times. It's an amazing country, but yeah... it's a hell of a flight.

Lee Majors: I was there 28 years ago. I did a commercial for Toyota. It's a little expensive there because everything has to be brought in. Every damn thing, except for the sheep. That was 28 years ago, but there's still more sheep than people there.

Lee Majors: I knew his work from Burn Notice and a couple other things he's done. I thought he was a good actor, but working with him... He's terrific. He's a very underrated actor. He just makes this show go. Nobody else could do that part like he does. Even in his interviews he's always been very funny. He's right on top of it. I enjoyed trading barbs with him on the show. I claim he's a chip off the old block. We do have some competition with the women and we have some competition with each other.

Quint: Since Ash has always been a little bit of a... fuck up, for lack of a better term...

Lee Majors: No, that's a good one.

Quint: I have to imagine that if he's in competition with you for women that you'll be winning.

Lee Majors: Well, I do show him up a little bit. It's all good.

Quint: Did you get any chance to talk with Bruce about your character before you started shooting?

Lee Majors: No, we just got thrown right in there together. That opening scene that you see with him coming into the house, that was our first scene. I didn't know how it was going to go, but that's how it went!

Lee Majors: Yeah. The whole cast just melds right in there. A'course those two kids are so excited, this is their first show. Did you do Dana yet?

Quint: No, I haven't talked to her yet.

Lee Majors: Well, just mention “blood,” to Dana. Just say “Mr. Majors wanted me to mention blood. How is it with the blood?” She'll just go on for 20 minutes about it!

Quint: That's good! That means I don't have to come up with a second question!

Lee Majors: She's so enthusiastic and so animated. Just ask her that question and you can giggle in your mind and say, “He was right.”

Quint: I've only seen the first two episodes of this season, but the second episode has one of the funniest moments I've seen in a long time...

Lee Majors: You know, I haven't seen it.

Quint: Are you going to watch it today, at the Fest?

Quint: Even though I've seen it already, I made sure to put it on my schedule today because I really wanted to watch it with an audience.

Lee Majors: See, that's why I've been waiting to see it. Instead of seeing it on a DVD... I wanna go tonight. My wife and I are going to go tonight and watch it.

Quint: I can't wait. It's going to blow the roof off the place. It's so funny and crazy and wrong and disgusting and hilarious... Kind of the best of what this franchise can give you.

Lee Majors: It can only be on Starz.

Quint: Since I've only seen the first two episodes I'm hoping we'll get to see Brock Williams in action.

Lee Majors: The third (episode) is a really good show. I can't go beyond that because things happen here or there and I can't even say how long I'm in the show. But, you know, you can be dead and come back.

Quint: In fact, if you wanted more screen time you should actually hope they kill you.

Lee Majors: You know, it's hard to give people screen time because there are five or six cast people when we get Michelle (Hurd) and Ted Raimi... you've got so many people that you can't write for all of 'em. I like it because it's only 30 minute (episodes) and I don't have to do much work! I look at the script for my work and go “No action... Location New Zealand? Okay, I'm in!” (laughs) 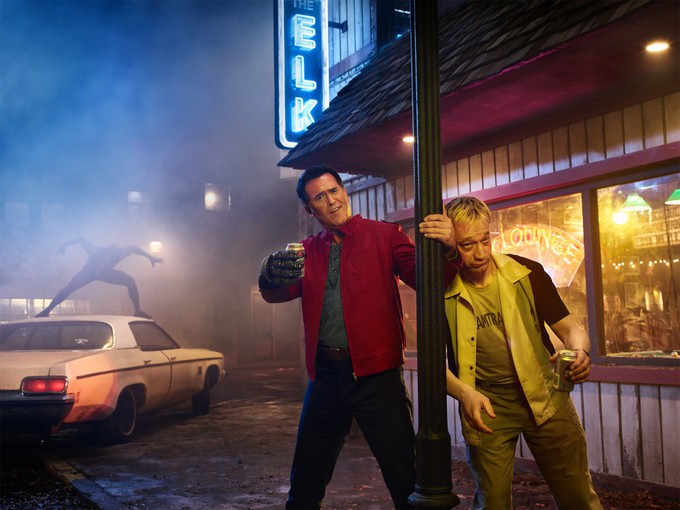 Quint: Do you stay around Auckland when you're shooting or do you explore the country a bit?

Lee Majors: They did mine pretty good. They got me in and condensed my work all at once, but I was there for about a month and a half. My wife loved it. She went over to one of the islands, which is all wineries and beautiful. She took the ferry over, her and Bruce's wife, and they did a bus tour all around the island to all the wineries. My wife doesn't really drink, but in one picture she had a red wine, in another she had a white wine, so it was quite fun.

Quint: And they had to carry her back.

Lee Majors: Naw, she was okay.

Quint: I'd like to end by asking how your experience in TV has changed throughout your career.

Lee Majors: First of all, when I started there was only three networks. Very competitive, wasn't it? To keep shows on for as long as I have was very tough, but I was very fortunate, very lucky. I went from show to show, series to series. But now there's a 160 some channels and stuff...

Lee Majors: Yes, and streaming. These days people don't want to sit down and watch TV. The kids do everything on their (devices), which is good, I guess. But Starz, I gotta give 'em credit. It's the only one this show would be on.

Then, a'course, the reality shows have kicked in so much. That knocked a whole lotta hard-working actors out of a lot of work because the screen time gets taken away by a reality show. Who gives a shit about the Kardashians or whatever?

Quint: Apparently a lot of people. I don't get it myself, though.

Lee Majors: I don't understand it.

Quint: I like stories being told. That's what I go to TV for.

Lee Majors: Me, too. I'm old school. I like to sit down to watch a show and have a beginning and an ending. I watch Ray Donovan and The Night Of. I thought that was really fantastic. I liked the first True Detective. I hated the second one with Colin Farrell. Hopefully they'll come up with another good one.

Quint: Did you watch Breaking Bad?

Quint: It sounds like it'd be right up your alley.

Lee Majors: Fargo I love. I love the original movie, too. Every time the movie's on I watch it. It's so crazy. We have kind of the same sense of humor.

Quint: We definitely both like the darkly comedic stuff, for sure. I know it's been hyped to the heavens now, but you definitely need to give Breaking Bad a go.

Lee Majors: I'm always working and I have to rely on my DVR for the television I do watch and I've just started doing that in the last three or four years. I'm usually watching sports. I'm a sports nut. Any pro game or college football game I'm on.

Quint: Well, I hope you're cheering for the Longhorns.

Lee Majors: Oh yeah. I have a place up in Houston.

Quint: Oh, I didn't know that.

Lee Majors: We have a place in LA, but for tax purposes we want to be in Texas. I'm no dummy!You have a lot of people from California coming to Texas and a lot of businesses. I know Governor Perry very well. I went up to the mansion when he was there a lot and went to the unveiling of his portrait... Boy, did he do bad on Dancing With The Stars! I didn't let him off the hook on that! 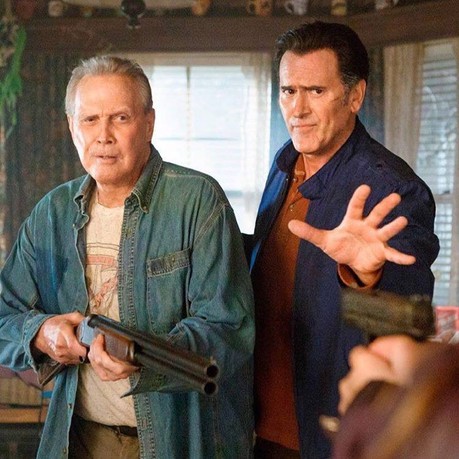 There you go, ladies and gentlemen. The great Lee Majors has spoken! Hope you guys dug the interview as much as I do.