STAR WARS RUMORS!! Juicy Ones!! Is Rey A Skywalker?? Or Perhaps Much More?? 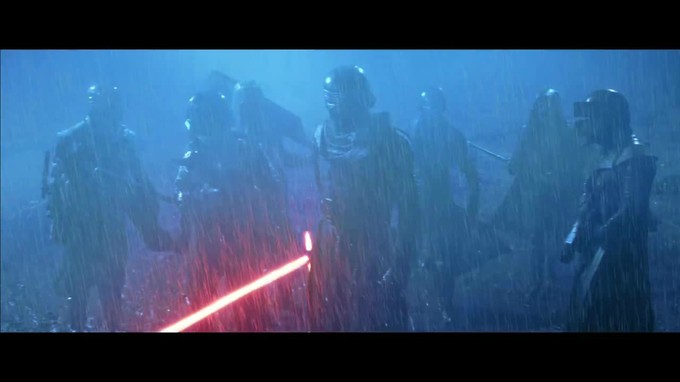 You think J.J. Abrams and Lawrence Kasdan were playing fast and loose with Star Wars lore, allowing Rey – with no Jedi training – to demonstrate such extraordinary Force-derived abilities?

Somebody thinks they’ve got the skinny on next year’s Star Wars movie, written and directed by Rian Johnson (“Brick,” “Looper”). If the source is right, it’s big stuff so I’m bathing every bit of it in rich, soothing invisotext:

According to alleged script leaks, Luke is hanging out with The Ghost of Yoda, who opines to Rey that the Jedi Council’s arrogance led to their demise.

Again, according to the leaks, Rey is The One, the long-promised reincarnation of The Very First Jedi. (I gather it will be confirmed that Anakin Skywalker was never The One. Which I guess would explain why Rey can so effortlessly best Vader’s broody grandson.)

It turns out Rey was identified as The One while she was just a tot -- but her journey to receive Jedi training (presumably from Luke) was somehow interrupted, and Rey was lost.

Apparently Luke and Yoda will explain to Rey that the founders of the Jedi and the Sith were young siblings who lived thousands of years prior to Qui-Gon’s birth. The duo got their superpowers from a Magical Tree on their family’s recently adopted planet. (Rey has visions that support Yoda’s claims.)

When the brother and sister approached the tree, they discovered their superpowers. Over the years they returned to the tree, always keeping their tree-enhanced activities secret from the parents who brought them to this magic-tree-sporting planet. One day the siblings argue (perhaps about sharing their knowledge of The Tree with their parents and the galaxy?), the siblings fight and the boy kills his sister.

But wait! The boy discovers he can still feel his sister’s presence. He touches The Tree and finds himself “transformed.”

Wracked with guilt and irrationally angry at his parents for settling on this stupid planet in the first place, the boy added partricide and matricide to sororicide and fled the planet.

But wait again! Apparently the boy didn’t completely kill his sister, because she too finds herself transformed. Transformed enough to found The First Jedi Order.

After training others in the use of The Force, the girl (or let’s call her The Founder) announced she would one day be reincarnated – and that her new self should be found and trained in the Jedi ways.

Anyway, it sounds like Luke is not Rey’s dad after all. Perhaps she can get visions from touching any number of Important Objects, and not just from Luke’s old lightsaber.

Can't figure out how invisotext works?  Find all of ComicBookMovie’s story on this rumor here.