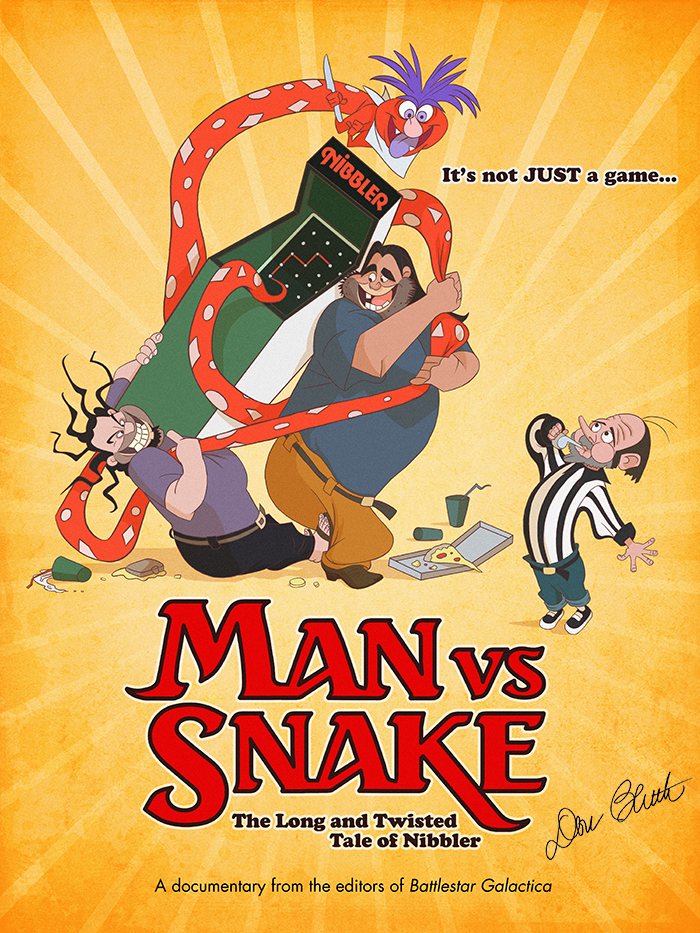 THE KING OF KONG is a terrific documentary, but one gets the feeling that the filmmakers felt slightly above their subject matter.  There's a sense of the filmmakers crafting the documentary to tell the story they want to tell, which is fine - I can't imagine a documentary that isn't made like that, but THE KING OF KONG makes it noticeable.  THE KING OF KONG never quite makes fun of its subjects - most of the time the subjects do that well enough on their own - but it does, at times, judge them.  Granted, when you have someone as arrogant as Billy Mitchell, and if you're not a part of that world, it's easy to judge.

MAN VS. SNAKE: THE LONG AND TWISTED TALE OF NIBBLER makes no such judgments, or if it does, it goes the other way.  Billy Mitchell and Walter Day, featured prominently in the documentary, come across as far more decent or at least not as smug.  Like THE KING OF KONG, the film centers around a record-breaking score, but unlike that film, the enemy is always the score itself, and not the other players.  There's healthy competition, but none of the players are cruel, and that sense of competitiveness is what drives Tim McVey (no relation to the terrorist, as Tim and the film makes great, humorous pains to show) to excel at Nibbler.

Never heard of Nibbler?  You're not alone.  Nibbler was one of those games frop the coin-op era - not as showy as Asteroids or Space Invaders, not as fun as Donkey Kong - that was all but forgotten as gaming advanced.  A sort-of Pac-Man knock-off where a giant snake navigates a maze, getting bigger as it eats food, Nibbler was never popular; the music was shrill, the graphics were basic, and the controls were awkward.  But it was also the first game that had the potential to award over a billion points, and that was all it took for Tim McVey to attempt to beat it in 1983.  And beat it he did, setting the highest score - over a billion points.  For his success, McVey was awarded the keys to the city, and McVery considered it one of the greatest days of his life.

25 years later, a story comes out that someone in Italy may well have beaten McVey at Nibbler, but because it was never officially recorded, McVey didn't hear about it until years later.  Now in his 40s and working a 40-hour day job at a factory, McVey decides that he wants to give it another go.  With the loving suport of his wife, and the support of Billy Mitchell and the coin-op gaming community, McVey attempts to break his record.  But another competitor, Dwayne Richard, also has his eyes on the prize.  Plus, life has a way of not doing what we want, and McVey struggles with achieving his goals.  For McVey, it's not just a videogame - for McVey it's a chance to turn his life around.

Tim Kinzy and Andrew Seklir keep the movie light - tonally, it's very similar to KONG, with lots of laughs and emotions.  The animated sequences are charming and funny, done with voiceover from the interviews of the film.  MAN VS. SNAKE also effectively explains the tech aspects of videogaming and the drive of these gamers to succeed.  You will find yourself invested in these people - not just McVey, but Richard, and Enrico Zinetti, the Italian gamer, as well.  McVey's wife Tina is also a compelling character - she pushes Tim to succeed, even when he's at his lowest.  While gamers have seen their share of controversy these past few months, MAN VS> SNAKE treats what they do with the utmost respect.  And at the end, we respect them too.  There are all manner of athletes, people driven to excel, and the gamers examined in MAN VS. SNAKE are no different.  We all need that one thing in our lives that gives us meaning, that pushes us to do better, and from that standpoint MAN VS. SNAKE, like THE KING OF KONG, is very relatable.  But MAN VS. SNAKE is a better movie because of its stance - these people aren't silly.  They deserve true esteem for what they do, and they are full of dignity and strength.  MAN VS. SNAKE will find a very appreciative audience, and it is a very entertaining and thoughtful documentary.