Muldoon Hitches a Ride With SOUTHBOUND at Fantastic Fest 2015

Hello ladies and gentlemen, your pal Muldoon here with yet another look at one of many kickass films screening at this year’s Fantastic Fest. So far it’s been a healthy mix of gore, talking body parts, ghosts, and lobsters/chickens – my kind of fest - filled with my kind of movies. That said, it is still a festival with many tastes, so you never know if what you are about to watch has been selected by a programmer who digs what you dig. Whoever programmed SOUTHBOUND for the fest should be given a pat on the back; it’s a solid film that I’m glad I was able to catch. So if you're curious about the film, let's take a stroll through what I was able to take away from it.

Unlike most of the films I watch at a fest, this one actually was on my radar after the flood of positive reviews from TIFF a few weeks back. CREEPSHOW, TALES FROM THE DARKSIDE, TRICK ‘R TREAT – all films I’d heard circling around the buzz of SOUTHBOUND. “Yeah… Okay, that’s a tall order just begging for disappointment, right?” Wrong. This film delivers and while nothing can really compare to the fun of CREEPSHOW, SOUTHBOUND feels like a fresh take on the whole thing, matching CREEPSHOW’s level of fun with scares, twists/turns that punch you in the kidneys, and a framing device that doesn’t feel forced. While I adamantly avoid “play by play” reviews, in this specific instance – I’ll provide just enough information to convey my thoughts on each of the film’s parts as opposed to generalizing the whole. 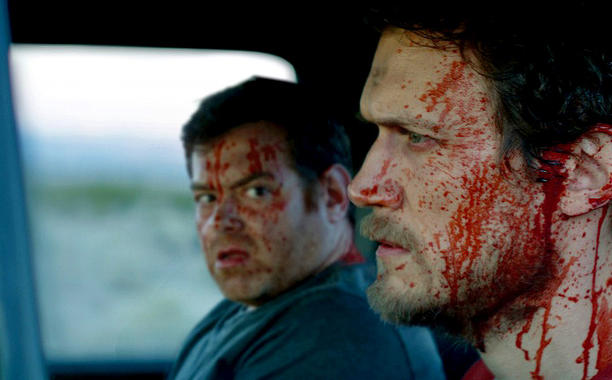 The film consists of four stories that flawlessly drift into one another, a psycho SLACKER of how to properly transition from one wild scenario to the next. The film kicks off with two men on the run, bloodied, beaten, and running on empty. While the dialogue here primarily consisted of “Fuck. Oh fuck. It’s fucking, fuck - fuck” this portion was beautifully laced with deserved humor, impressive visual effects, and does a great job at immediately pulling you into the world of SOUTHBOUND, a TWILIGHT ZONE in the desert pile of fun.

We then get thrown into a van with three lovely ladies in a rock band on their way to their next gig. They blow a tire and are thrown into a bizarre situation when a retro couple driving by gives them a lift back to their place to provide help. Well, they provide something and that’s 20 minutes of “Holy shit.” I won’t even try to describe any more of this story, as its twists and turns come at you hard with jump scares, slow-building tension, quirky humor, and just snowballs into a satisfying end. This portion is beautifully shot with images that play up reflections (I’m a sucker for framing within a frame), a gorgeous and consistent color palette, and delivers some of the best dialogue of the film. The three leads felt real, tossing around real world conversations like a ball, never once dropping it and reminding you that you’re watching memorized lines. My favorite story in the film. 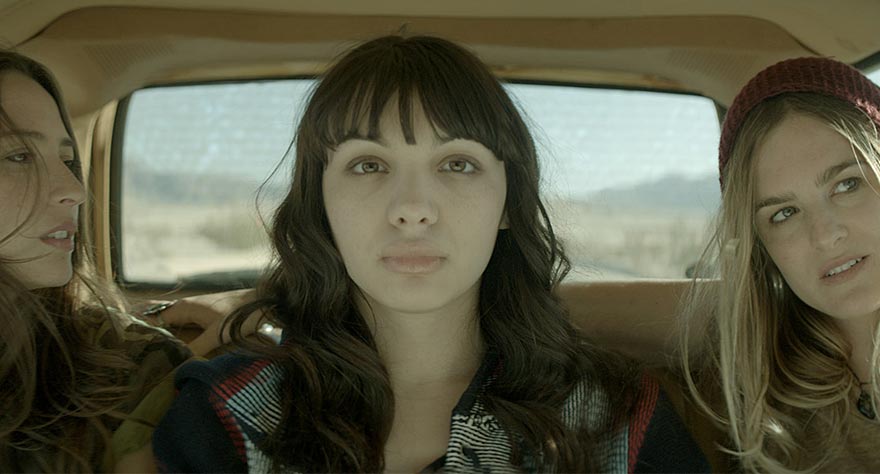 CRUNCH! Next up we’re shoved directly into the middle of shitty situation, a man driving home hits a person and has to handle bringing them back all on his own, save for a few mysterious voices on the other end of a 911 call. This portion has literally two individuals in it, and falls completely on the shoulders of its lead, this poor guy who’s just trying to save a life – but he’s at the mercy of the 911 operators, who are having a ball giving him a monotone runaround.  The lead knocked it out, with an incredible ability to force your sympathy (even if he has hidden demons of his own). There’s genuine frustration and angst in every moment, and there are a few unnerving visuals that would make Cronenberg squirm. Solid short. 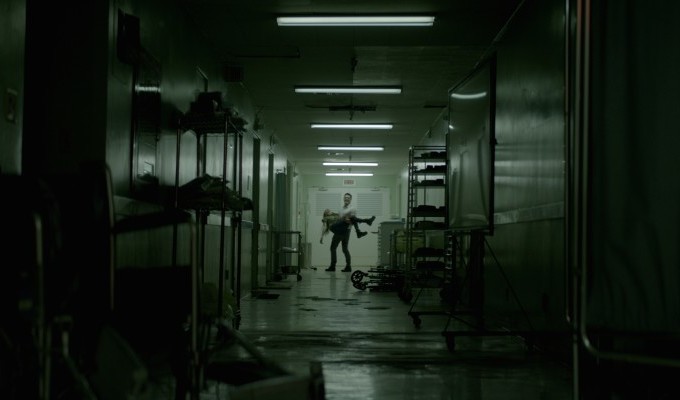 The film then brings us into a story of a brother trying to pull his sister out of a sticky situation. This piece was fun, but ultimately felt too abrupt for my tastes. It felt like it’d work better as the first act of its own feature. It had interesting characters and was shot with a great energy, but it was missing something that I can’t put my finger on. Don’t get me wrong, it’s enjoyable, has exciting moments of “Whoa – wasn’t expecting that” and will absolutely hold your attention. Great gore, interesting characters, but a world I felt I wanted to see a little more of before being taken out of it. My biggest critique here is I wanted to spend more time with these characters in this setting, which isn’t much of a dig as it is me wishing this short to be given the run time to tell the story it wanted to. The other scenarios in the film felt contained with their own beginning, middles, and end that fit perfectly into a short story format. With this one, it needs to sit out and breath a little longer.

We're then casually guided (drunk on horror glee) to a family celebrating their last few days with the daughter before she heads off to college.  The home they are staying in is menaced by masked baddies, taunting the family for an unknown (to us) reason. The family felt real and I loved the fact that the dad had his shirt tucked into his pants… a silly detail to some, but that decision for his character helped spell out “This is a stereotypical middle-America nuclear family,” but one with demons in their closet. The menacing masked men are brutally dead set on exorcizing those demons through a twisted night of revenge culminating into something otherworldly. No doubt this portion of the film will be compared to THE STRANGERS, though once more it was shot well, acted well, and well… kind of rocked. Perfectly tuned tension with plucks of jump scares - a lovely KO to an already interesting fight of a film. (It was good.)

We then slide easily back into one of the stories from earlier. (I’m being purposefully vague here, because I’ve already described too much!) We pick up with a few characters we were introduced to beforehand and now get a wider scope on their story. This right here is, in my opinion, what elevates SOUTHBOUND and reminds us how what we’ve been watching all exists in the same universe. The film was written with an elevated intelligence of how to blend these bizarre stories together. With so many chefs in that creative kitchen I’m happy to report they created one hell of a meal, a smorgasbord of laughs, scares, and imagery that will linger in your nightmares. It’s obvious they didn’t treat the scriptwriting process like a hot potato or a game of telephone; it’s designed to take you on a journey and it does just that.

SOUTHBOUND is a fun film I’d eagerly suggest is worth the price of admission. I expect this to be in theaters sooner rather than later. Solid flick.