Check Out an Exclusive SXSW Trailer for THE GOOB!

Hello ladies and gentlemen, Muldoon here with an exclusive trailer for THE GOOB, which screens a little over a week from now at this year's SXSW down in Austin, TX. While I've yet to see the film, from the blurbs in the trailer below - it seems like quite a few folks have been impressed by it, so I'm hopeful. I'm not sure how many folks out there in the AICN audience will be hitting up SXSW, but rest assured - with the amount of coverage on this site (and well, a lot of sites/magazines/news casts...) I'm sure you'll be innundated with all sorts of interesting things to keep an eye out for. That said, if anyone out there has the ability to check out THE GOOB and feels inclined to write up your thoughts on the film - please feel free to shoot them my way for possible inclusion in that SXSW coverage. I'm not sure what my schedule will be like, so on that same note, if you end up catching a film that you're ga-ga for, then send me your thoughts at Mike@aintitcool.com as I'm constantly on the look out for interesting films.

Liam Walpole, Sean Harris, Sienna Guillory  make up the cast, while newcomer Guy Myhill sits in the director's chair. According to SXSW's website, the film screens at: 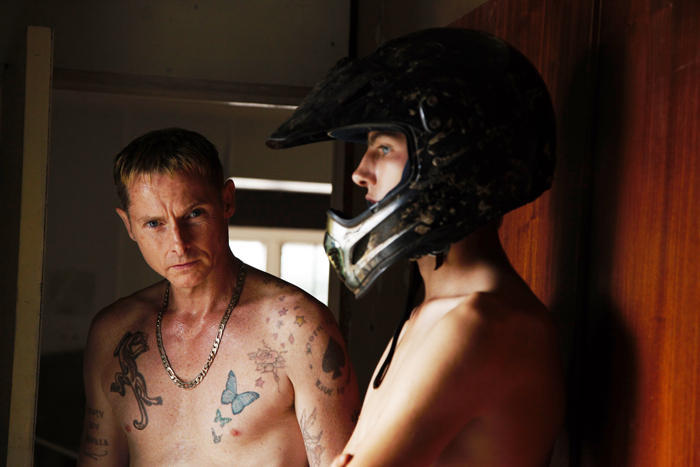 Set in the poor countryside of Norfolk, England, 16 year old Taylor (London model Liam Walpole) spends his summer helping his mother (Sienna Guillory) ready their roadside greasy spoon for the busy holiday season. Both live under the vigilant watchful eye of his Mother’s controlling, vicious boyfriend who, in a fit of rage, causes an accident that hospitalizes Taylor’s brother. He also takes cruel pleasure in undermining the boy’s hesitant attempts at friendship and romance. Luke Abbott’s electronic score is an effective contrast to the decaying rural setting, underlining the inherent violence in one generation giving way to the next.