TOY STORY 4 directed by John Lasseter coming at you in June 2017!! 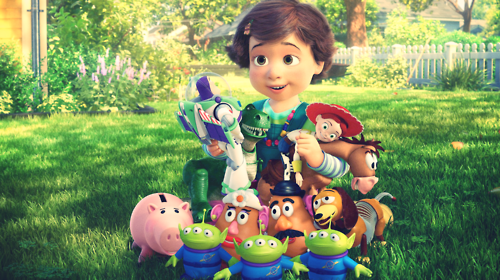 We last left Woody, Buzz, and the rest of their compadres with the young Bonnie as their previous owner, Andy, went off to college. However, that doesn't seem to have been the end of their story: Disney has announced TOY STORY 4, to be directed by John Lasseter and released in June 2017.

We can presume that the focus will still be on the characters voiced by Tom Hanks, Tim Allen, Don Rickles, etc., but as to the particulars of the story, that's anyone's guess. We went through a cycle of childhood, adolescence, and finally young adulthood with Andy, and I don't know if starting back from scratch with little Bonnie is a ripe template for fresh material. Plus, weren't they just in a sort-of old folks home? Hard to dial it back from the idea of growing old and dying...

Still, it's a Lasseter-directed, Pixar-produced TOY STORY 4 coming at us less than three years from now. After the guy knocked out two parts of one of the finest cinematic trilogies to date (I'm presuming he stepped aside on 3 to focus on CARS 2, which thankfully didn't detract from the film), I have faith he and Pixar won't waste our time with a half-baked cash-in featuring our beloved characters, and will give us more moments to make us laugh and cry embarassingly.

Now that Michael Keaton's got that BIRDMAN heat on him these days, we'll probably be lucky enough to get more time with his Ken…which alone would get me off the couch.