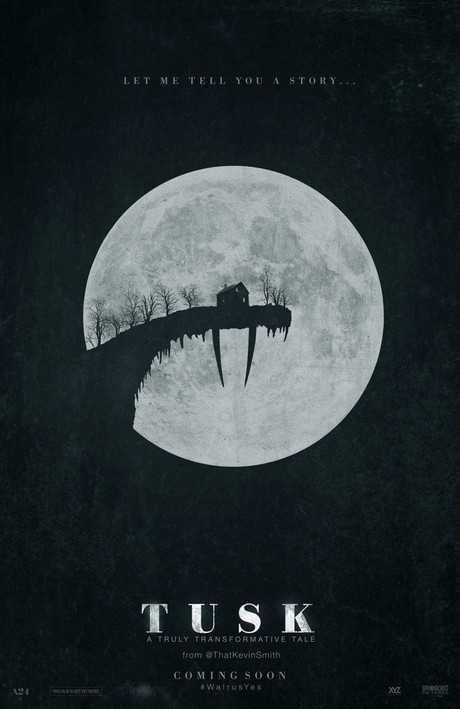 Ahoy, squirts! Quint here. After the double whammy of Cop Out and Red State I never expected to be the guy standing against a tide of critical disdain for a Kevin Smith movie, but here I am. Call me crazy, but I kind of loved Tusk.

Don't get me wrong... there's a hefty amount of self-indulgence on display, but despite the faults I felt Smith not only delivered the exact movie he set out to make, but he made the best version of that movie that he could.

My main problem with Red State wasn't that he tried to do something different, it's that he delivered the less interesting version of that muddled story. It felt confused and unfocused to me, with moments of greatness sprinkled throughout. It also didn't have the balls to follow through on the more interesting ending and decided to go for a joke instead.

That's not the case with Tusk. Oh, no. Not at all. In fact it's the opposite. Everything starts out as a joke and slowly morphs from a typical Kevin Smith movie to his fucked up version of Human Centipede. Even then it's so damn bizarre that it's not entirely gross-out horror, but I'm getting ahead of myself.

If you don't know, the film is about Justin Long going to Canada and getting abducted by Michael Parks, who has some strange ideas on companionship.

Long has a hell of a job to do in this film. Not only does he have to undergo an uncomfortable transformation as the film goes on, he also has to play a character who is way more of a dickhead than a guy you should feel sympathy for. He's a podcast host who seems to alternate between being mean as shit and egotistical as all hell. I have to wonder if Smith essentially wrote him as the most extreme evil version of himself because there's a feeling of catharsis to the character, like he's working some personal shit out via his chosen art.

The whole tone of the picture is one of someone back in love with storytelling mixed with a defiant “fuck you if you don't like where I go” thread. Smith is confident here and doesn't second guess his instincts, which ended up as a film I couldn't help but give myself over to. It's earnest. It's weird and kinda messy, but very earnest.

Tusk also has some of the sharpest Kevin Smith dialogue he's put out in a while. It doesn't hurt that he has a bevy of fantastic actors in every role. Justin Long carries the movie admirably. I've always been a fan of his and it's great to see him get to show off so many different ranges in this one role. He not only gets to be a selfish dickhead, but you see glimpses of his past “boring” self shine through in some pillow talk conversations with his girlfriend. Then there's the stuff with Parks, but I don't want to give too much away there. Needless to say, the plays every aspect of someone in a situation like his character is in perfectly. 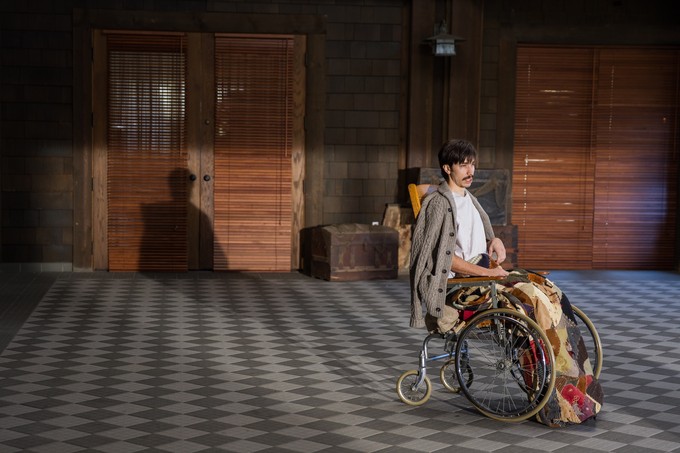 Genesis Rodriguez plays Long's girlfriend, a seeming one-note side character that is given a surprising amount of depth as the story unfolds. Rodriguez has a one-shot confession scene that is an amazing showpiece. I've seen some of her work before, but her turn in this one really made me take notice. I think we're going to be seeing a lot more of her in the future. She's got the goods.

Haley Joel Osment is Long's podcast co-host who doesn't quite get as much care as Rodriguez's character does, but he still shows that he's got the chops he did in his childhood work.

Michael Parks chews just as much scenery as you'd imagine he would. He was the shining light in Red State and he's just as good, if not better, here. I say he might be better because there's a few different sides to his Howard Howe. I wouldn't go so far as saying he has split personality disorder, but Smith does take him from a seemingly fascinating, but sane old man and slowly strips away layer after layer of his sanity until we see him for what he truly is. Each layer exposed gives Parks the ability to play in a different way.

He's particularly effective when he's in the transition from trying to keep up the facade of sanity to flat out taunting his captive. The way Parks plays those scenes with Long is the best dark humor balance in the movie. He's creepy and funny at the same. 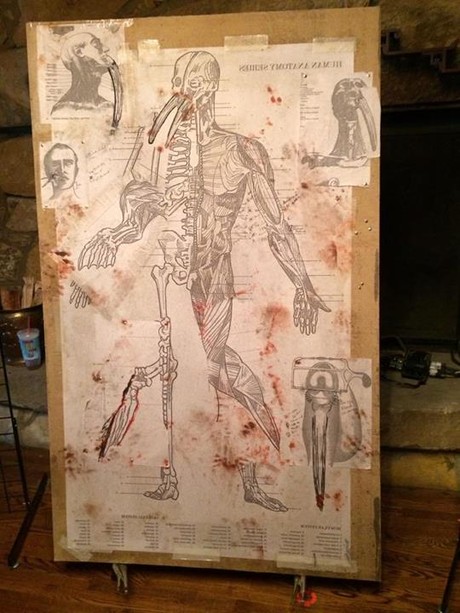 I was hesitant to bring up Guy Lapointe, an eccentric detective introduced halfway through the movie, because it's a nice surprise, but it's being talked about pretty openly now and it's impossible to talk about Tusk and not bring up this character. I think you've got a good idea of my feelings on the movie if you want to keep yourselves unspoiled on this particular element and stop reading now. I won't be offended.

This detective is searching for Parks, who has apparently left a trail of dead bodies as he's worked towards his ultimate objective. He's a quirky French-Canadian with a silly accent and an even sillier face. Naturally, this dude is played by Johnny Depp in full prosthetics. For a lot of people (and fellow bloggers and critics) this is full on Depp overkill, but I gotta say I loved him in the movie. He's doing his schtick at the highest levels possible, but in a weird way I saw this character as a tribute to Peter Sellers. That might all be in my head, but I think he played it the way Sellers would have: exaggerated and silly to the point of absurdity, but still funny.

The problem with Depp being in the role isn't that he stinks, it's that I get the feeling Smith was so enamored with him that he didn't want to cut a single second of his character out of the movie. Unfortunately that means there are a lot of superfluous material with Depp, including one extremely unneeded flashback scene where he and Parks try to out crazy-accent each other in what feels like an uncomfortable improv workshop exercise.

I've seen people turned off by the dark turn the movie takes and I've seen people go with the movie past that only to be thrown by Depp, underlined by that one flashback in particular. I was able to roll with both, but I like some silly shit, so take that into consideration.

Oh, and I should also say that Kevin's daughter Harley and Depp's daughter Lily-Rose have two great scenes (well, really one, but they go back to it twice... it's hard to explain...) and are really funny together, so it doesn't surprise me to hear that Smith is spinning off their characters into their own movie (Yoga Hosers, in which they will play the same Canadian convenience store girls as they do in Tusk). Call it nepotism if you want (you won't be wrong), but at least I can see why they earned that shot.

There you go. Fantastic Fest 2014 movie one written up! Got a packed schedule for the next week (including a detour to MondoCon), so keep an eye out for more reviews of weird, fucked up crazy-ass shit in the coming days!