Ahoy, squirts! Quint here with first of a few reports from today's Paramount Panel at the San Diego Comic-Con. Let's talk turtles, shall we?

Let's get this out of the way: I was born in 1981, so I am a true blue Ninja Turtles fanatic. In my childhood it was all about the '80s cartoon and the surprisingly gritty 1990 feature film. As I grew older I found the original, darker comics.

Despite my passion having waned in recent years, I still have a soft spot for Michaelangelo, Donatello, Leonardo and Raphael. I especially like the crazy mutant world of the cartoon and comics, where it was totally cool to have a brain alien thing controlling a big robot body or have a punk rock Rhino/Human hybrid.

I've been pretty skeptical of the movie, like most. I'm still not convinced, but the footage they showed at the panel did its job in so far as it warmed me up to the property.

The biggest thing for me is that each of the Turtles' personalities shined through. Design issues aside, they felt right. I don't like the noses either, but all that's aesthetics. The turtles could look 100% perfect and still be performed poorly. The important thing is that this new film nail the characters.

Now, you can't never tell how a full feature will fare based on only 2 sequences, but it looks like they nailed the four distinct personalities. Leo is the calm and collected leader, Raph is the brooding dick, Donatello is the nerd and Michaelangelo is the loveable doofus. You'd think that's simple and to a degree it is, but the magic of the Ninja Turtles is how their chemistries mix and mingle. You have to buy them as a family or it really is just nothing but a toy commercial gone bad.

We saw two big sequences and a few bits and pieces. The first starts off about 10 minutes into the movie as April O'Neil and Will Arnett are driving around the city on the hunt for the vigilantes who dare to stand up against the Foot Gang terrorizing the city. Fox has a really awkward line about wanting to find a story that “really means something” before they see a bunch of citizens running for their lives from the subway.

She jumps out and heads down into the subway where she finds the foot clan, who look pretty militaristic with metal face masks, who have taken hostages. A lady with purple streaks in her hair seems to be the leader. They take April hostage as well. The boss lady calls out into the dark tunnels “We know you're out there! Come out or we start killing the hostages!”

Cut to the Turtles' lair. We only see the tops of their shells and heads from behind as they look at a bank of sloppily assembled monitors that have feeds to the news and a bunch of security cameras. They see the hostage situation and are debating about going up as the camera pans over the images on the monitors. When the camera gets to Mikey we see he's watching Keyboard Cat playing chopsticks with chopsticks and he can't believe what he's seeing. Another Turtle smacks him and changes the feed to the hostage crisis.

Back in the subway station the Foot is tired of waiting, which is probably the wrong time for April to try to snap a photo. The boss lady raises a gun and moves towards her as a subway car blasts by. The turtles jump off the car and into the foot clan, making quick work of them. The scene is shot mostly in the darkness of the tunnel, the only light coming in flashes from the passing subway car.

The turtles scramble away up one of those yellow garbage tubes you see pretty much only in New York or movies about New York. April follows them, getting to a nearby rooftop where we hear the four turtles excitedly recounting their battle with each other. They go to high five and a flash from a camera happens, freezing them in place. April seems frozen as well, knowing she got caught.

She tries to escape, but the turtles trap her on the roof, giving us our hero shot, toe to head, of Raph who doesn't look very happy about being found out. “Give me the camera.” Mikey in the background: “Look, he's doing his Batman voice!” Raph: “If you don't give me the camera I'm gonna...” “Enough!” Leo jumps down from the water tower and the rest of the scene is exactly what was in the first trailer, ending with Mikey taking off his mask and April fainting.

She comes to and her POV is the four turtles' faces looking down on her and then the obligatory “What are you?” scene happens. They are just teenagers. They're turtles. They're ninjas. You know the drill.

They give her back her phone, saying Donatello wiped it, and try to disappear into the night. April captures some grainy video of them jumping from rooftop to rooftop and that's that.

A jump in time and April has been brought to the Ninja Turtle's lair. Mikey: “Welcome to our Hogwarts! Our Xavier's Academy! Our...” etc etc. April: “It smells like a sewer.” They take the bag off her head (a cloth sack with a smiley face drawn on it) and introduce her to their master. Splinter stands in a candlelit room, welcomes her in. She says, “Splinter?” The rat waves her towards him. “Come closer. It has been a long time...” and the footage ends.

The next sequence was a big action scene taking place at what I can only describe as a snowy castle. Foot with machine guns jump out of cars surrounding the turtles, April and Will Arnett's character. The Turtles surround the humans as the Foot opens fire. Bullets bounce of the Turtle's shells. “We're bulletproof!”

Donny's goggles come down, he surveys the area like a Terminator, finding a 16 wheeler they can use to get out. They break apart, the humans running for the truck and the turtles jumping into action. We get a little sense of some of their different fighting styles here, Donatello's bo staff the most impressive.

They start up the truck and the turtles jump on, the Foot give chase. A car cuts them off, a rocket launcher aimed in their direction. Arnett swerves to avoid the missile, but it slams into the side of the truck. The turtles are all in the back, doors open. The impact sends Leonardo flying off, hitting a tree painfully before crashing to the snowy ground. Arnett loses control and goes off road, towards a cliff. The truck balances precariously on the cliff before plunging down. Leo jumps after it, trying to catch up and he's followed by some Foot trucks. The truck actually hits him, sending him sliding down the incline on his back.

They shoot some kind of electric line at him. It attaches and electrocutes Leo. Donatello and Raph see Leo's in trouble. Raph says his shell is cracked, but for Donatello to “Tape me up!” so he can go after Leo. “Let me be the badass for once,” says Don and with a nod from Raph he jumps out of the back of the truck into the snow and to Leo's aid.

Leo's unconscious, gravity and momentum pulling him down the snow, his shell acting like a sled. Donatello unhooks the electrical line only to have a Foot truck creep up on him. “I always wanted to try this,” he says as he locks one end of the staff under the front bumper, clicks a button extending the other end, which hits a rock, the impact punching the nose of the truck up, sending it flipping over.

Raph jumps in to help and we get that cool “slingshot” moment from the trailer where Donatello uses his bo staff to swing Raph at a Foot truck, which he hits and crumples in the door.

April leans out to take photos, Will Arnett is distracted by her ass (very Michael Bay moment there) and hits a ton of snow, which causes an avalanche behind them. Leo wakes up in time for him and his turtle brothers to escape the snow. The sequence cut out there, but we got a little sizzle reel of some moments after, including a Shiny and intimidating Shredder and a slow motion shot of Splinter rolling mid-air, dodging at least a dozen thrown knives, before landing in a superhero pose.

Final shot was a close up of Raph saying (in his Batman voice, as Mikey would say) “Cowabunga.”

Kevin Eastman, Jonathan Liebesman, Will Arnett, Megan Fox, Andrew Fuller and Brad Form was on hand for the panel and answered some questions. The audience was surprisingly hostile in the few questions they got to ask. One was like, “Kevin, I love your work... but when is this franchise just going to die?” and another was “Who's dumb idea was it to make them aliens?”

Of course, that last question has a point. They just kind of shrugged and were like “You're okay with them being mutant turtles, but aliens is too much?” I think that was the moderator who said that, so don't pull out your pitchforks just yet, turtle fans.

The Q&A was short, but here are some highlights: 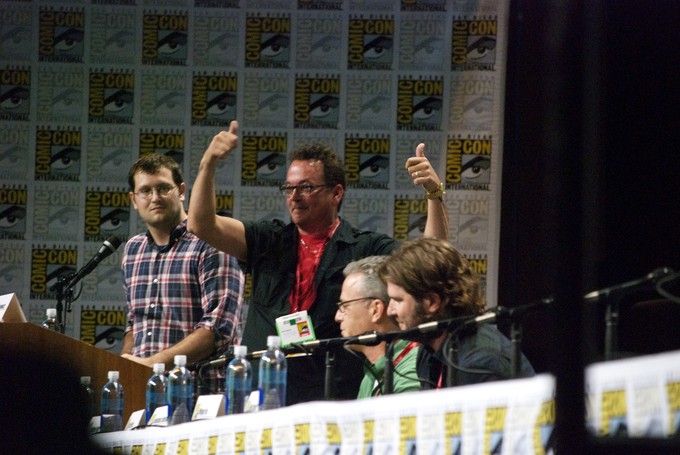 -Andrew Form said Kevin Eastman was the first call they made after deciding to do the movie.

-Said they came close to naming the bad guy The Grater because they were coming up with names while doing dishes and he scraped his hand on a cheese grater. Laird said, “How about The Shredder?” And history was made.

-Will Arnett claims to have joined Channel 6 for half a year to prepare for the movie. “Just doing weathercaster kind of stuff.”

-Will Arnett's favorite Turtle is Mikey. Megan Fox “Everybody's stealing my shit! I've been saying Mikey for years!” Will Arnett: “Well, there's only four of them.” 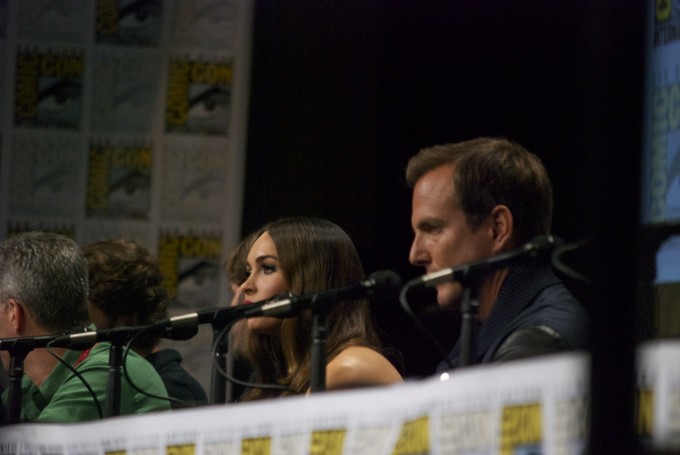 And that was the Turtles part of the presentation. Apologies for the weird final panel picture. Kraken informs me that the photographer's pit next the stage now has a rail erected between the photogs and the stage, which means there's only a narrow lane for him to snap a close photo from.

Next up is a description of the Interstellar trailer and some talk about Chris Nolan's con appearance! Stay tuned!