Nordling Reviews DAWN OF THE PLANET OF THE APES! 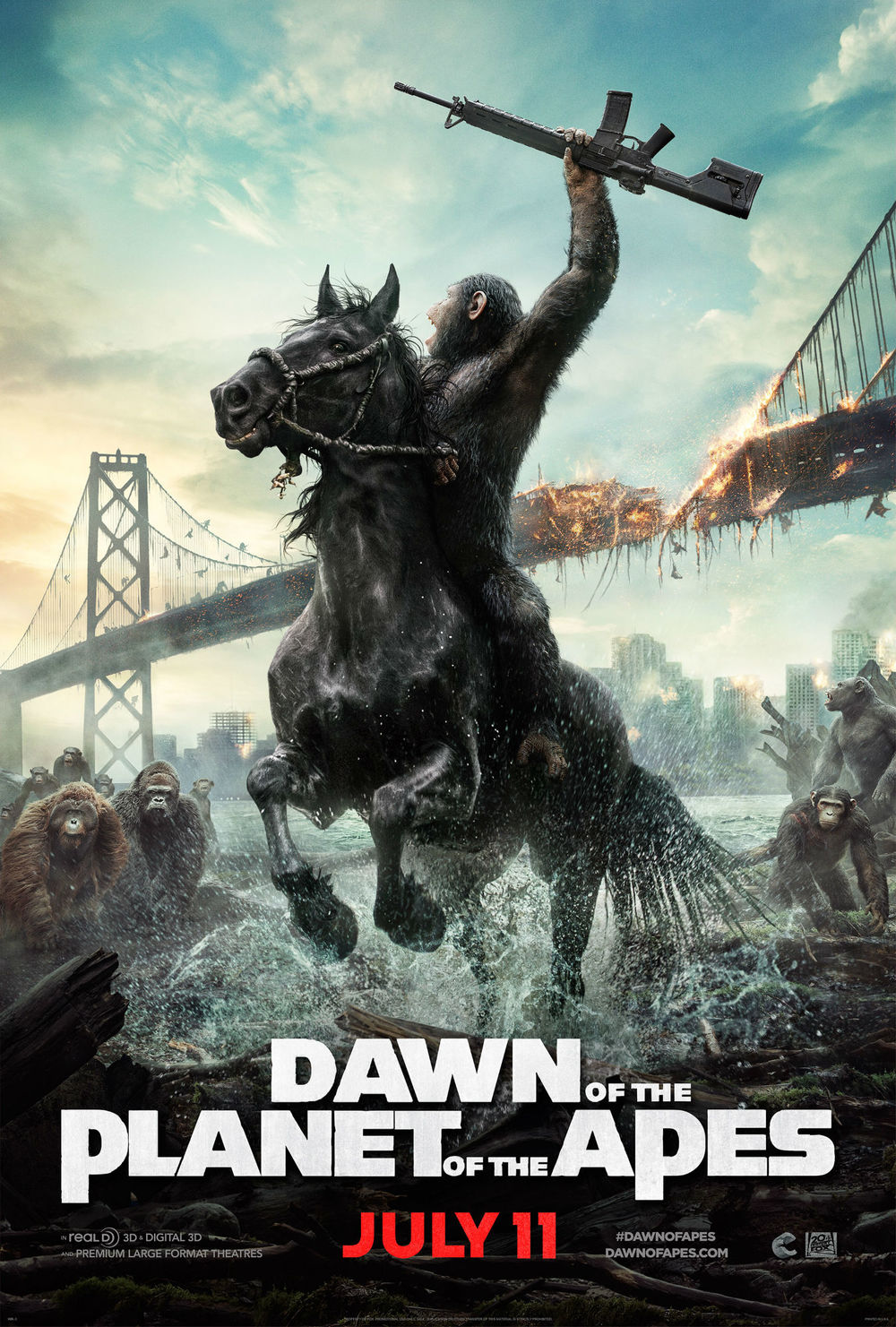 Once a character in DAWN OF THE PLANET OF THE APES picks up a gun, the conversation is over.  Any valid complaints, a hope for some kind of compromise or a shared ideal - all gone. Once violence enters the picture, there's nothing left but the bleeding and the damage done.  Any alliances, any possibility of coming together, and any mutual understanding between groups is left to twist in the razor wind.  That's the tragedy of DAWN OF THE PLANET OF THE APES - with a nudge here, a leap of trust there, things could have been different.  So it goes with the rest of us.

DAWN OF THE PLANET OF THE APES is bravura filmmaking on so many levels that it's scary.  Frankly, this movie shouldn't be this good.  Sequels rarely are better than the originals, and that is mostly because it's unusual for second (or third, or fourth) films to have deeper themes to explore beyond the first, or for their stories to have anything new to say.   The best sequels always take chances, and risk alienating their audience for a larger point.  They aren't satisfied with resting on their laurels.  For lack of a better word, great sequels are hungry.  DAWN is as hungry a sequel as I've ever seen, and it enters that rareified air shared with films like THE GODFATHER PART 2 or THE EMPIRE STRIKES BACK.

I'm not going to make the argument that Andy Serkis's work as Caesar deserves awards consideration - for one thing, if he were to be recognized in that manner, actors like Toby Kebbell (Koba) or Nick Thurston (Blue Eyes) should also earn attention.  Serkis willingly shares the limelight this time around, and it results in strong performances across the board.  The humans, this time, are more compelling than RISE (although I quite liked James Franco's acting, and John Lithgow was wonderful), but Matt Reeves wisely keeps the film ape-centric.  The humans are painted with broad strokes, with a little bit of nuance, but the apes are full creations of WETA special effects, great writing, and remarkable, complicated performances.

Ten years after the Simian Flu devastates humanity, Caesar and his colony of apes live peacefully in the redwood forest outside San Francisco.  Caesar now has a family - his son Blue Eyes goes hunting with him, and his wife Cornelia (Judy Greer) is expecting their second child.  Maurice (Karin Konoval), Caesar's advisor and friend, wonders if there are any humans left.  The answer, of course, is not long afterwards, when a scouting party comes across the apes and things go badly.  It takes a great deal of restraint for Caesar to keep his colony in check, especially since his friend Koba is all too eager to take the fight to the humans and wipe them out.  Koba has good reason not to trust humans - unlike Caesar's experiences, all Koba learned from humanity is pain and suffering, and he will not go through that again.

Still, a tentative alliance is formed, between Caesar and Malcolm (Jason Clarke), a surviving human with a family, much like Caesar's.  Malcolm also has a son, Alexander (Kodi Smit-McPhee) and a new wife, Ellie (Keri Russell), who Alex is still getting to know.  The ape colony isn't far from a hydroelectric dam that could return power back to the few remaining human survivors in San Francisco.  Dreyfus (Gary Oldman) is co-leader with Malcolm, and trusts the apes about as much as Koba trusts the humans, but he is willing to take the chance.  If Malcolm is successful, perhaps the two groups can live together in peace.

Sadly, as we've seen many times before, life happens when you make other plans.  The audience is helpless to watch the inevitable descent as both apes and humans make mistakes, trust gets breached, and both Koba and Dreyfus manipulate the situation to their advantage.  As in the real world, this is a tragedy that could have been avoided, and when the guns come out, it's too late.  War is a monster that must be fed, and there are those on both sides all too eager to feed it.  The geek in you may cackle with glee at the sight of apes carrying advanced weaponry, but when we do see them in action, there's a pallor of melancholy over the entire affair, and we realize that we don't want to see these characters hurt.  It's rare that a movie does what DAWN does - when the action does come, it's a moment of failure and defeat, not a triumph.

The script by Rick Jaffa, Amanda Silver, and Mark Bomback builds the tension naturally, and as the situation escalates, the film wisely stays restrained until the inevitable attack.  This is a film that, like the Chinese curse, gives audiences what they wish for, but they'll quickly realize the sadness and calamity that ensues.  Matt Reeves shoots the action very well, with a stunning shot on a moving tank, but all the action would just be empty spectacle if Reeves hadn't filled DAWN OF THE PLANET OF THE APES with such emotion and dread, and directed his actors to such great, compassionate performances.  It also helps that DAWN has no real villains - in DAWN everyone has their point of view, and in certain situations, that point of view may even be correct.  Koba sees humans as dangerous and evil because that's all he knows from his experiences with them, but it doesn't help matters when the humans seem to validate that opinion.  Dreyfus lost his family to the Simian Flu, and it's easy to blame the apes for that, especially when they continue to act aggressively.  Even Malcolm and Caesar's friendship feels like a fragile thing, ready to burst open into animosity and hatred at any moment.

Michael Giacchino's score is some of his best work yet; he really is the spiritual successor to John Williams at this point, and the rich emotion of DAWN is vastly improved by his abillities here.  WETA's effects work is unparalleled.  You forget that these apes aren't real almost immediately.  The opening sequence, as we travel with the apes on a hunt through the woods, is terrifying and exhilarating.  The motion-capture is flawless, and frankly it makes films like AVATAR look like finger painting, especially seeing the apes interacting with a real set as opposed to a computer background.  The future of this technology is truly exciting indeed.  Who knows what worlds these effects will create in the coming years.  For now, it's breathtakingly beautiful.

DAWN OF THE PLANET OF THE APES is the summer movie I was most anticipating this year, and I'm happy to say it exceeded those expectations by a wide margin.  Emotional, beautiful, terrifying, and satisfying, DAWN OF THE PLANET OF THE APES is one of the best sequels I've ever seen - it's so good that I have legitimate concerns as to how they're going to top it.  If the filmmakers of the third installment remember to continue to make these films full of meaning and power, then this series of one of the most beloved science fiction franchises of all time should get even better.  Just stay hungry, whoever comes next.  Don't be satisfied.  DAWN OF THE PLANET OF THE APES enriches this franchise and shows other films this summer exactly how it's supposed to be done.  If you're going to blow shit up, by God, make it matter.