UPDATED! Some troubling concept art for Ron Howard's The Dark Tower adaptation have popped up.

UPDATE: Illustrator Gregory Hill sent in some comments and clarification about the below pieces. Check it out below:

I got an email from another concept artist that some of my Dark Tower illustrations had surfaced on your website, and had to check it out. I’m not the huge Stephen King fan that you and the people who commented on my work are, I admit. And I’m a little surprised that my work has popped up on your site now, since it’s over 3 years since we were working on this project.

I don’t think there is a problem with posting this work, since I’ve had the illustrations on my website for a couple of years at least, but I would just say that the work is the property of Universal Studios, and I did sign a confidentiality agreement along with everyone else on the job. In general I wait for a film to be released domestically before I share my artwork on my site. As you all know, the Dark Tower project was “shelved” in the spring of 2011 so I was faced with a quandary…. can I put my work online or not? I decided to do so because I was proud of the work…. and we all hoped that the project would become a reality. So it is possible that you will be asked by Universal to delete this and remove my illustrations.

I read several of the posted comments on the work, and thought I should just say a few words about it. Obviously you and the others have strong feelings about the Dark Tower books. Contrary to the opinion of one of your commenters, I did read all of the DT books as I was beginning this project. And I know that the illustrations show some significant differences between descriptions in the books and the look that we were pursuing for the film/TV project.

My opinions below are just my opinions…I was a very small cog in the machine that was trying to get this film made, and my thoughts may not reflect the actual workings:

Concept art for a feature film doesn’t mean drawing whatever we want, and there are many, many constraints we have to work within. When we were on this job, it hadn’t been green lit to my knowledge…. a certain budget had been set aside to basically figure out if the huge project could be realistically filmed. I can’t remember if there was a script or just a treatment at that point. Our team was located in New York, and the idea was that the filming would be done in and around New York City. So the production designer’s job was to rethink the world of DT, to accommodate locations and the environment of New York, the Hudson Valley and surroundings. That’s why Tull isn’t an old western town for instance. We weren’t even at a point of drawing up sets… this was all really preliminary. If the project had been finished, there is no telling whether any of our work would have been approved… perhaps a whole other design concept would have replaced what we did.

That’s about it. We all knew that the world we were hoping to create wasn’t a replica of the world of Mr. King’s books. So it’s unfair to judge Mr. Howard’s or Mr. Goldman’s potential work based on these few illustrations. To my knowledge everyone involved wanted very much to see this huge undertaking come to fruition. I hope that it might indeed happen sometime soon, and would love to get back into the world of the Gunslinger.

I’d appreciate it if you could post this to help explain what my illustrations were meant to do.

Thanks for reaching out, Gregory. It sounds to me like the movie's still trying to find its feet, but no matter what the illustrations below give you a sense of the direction Howard and his crew were going.

Ahoy, squirts! Quint here. Word is that the images I'm posting below are concept art pieces from Ron Howard's Dark Tower adaptation and I believe it. What I'm fuzzy about is if these pieces were approved or rejected or part of a series of attempts to get Howard's vision realized. In other words, I'm not sure how much these reflect the final vision of what we will ultimately (maybe) see.

No matter what the answer is, these do show us a bit of direction Howard may be going.

Quick Dark Tower recap for those who might not have read them yet: There are an infinite amount of universes and realities, but they all share one constant: The Dark Tower. It's the lynchpin that holds every plane of existence into place and it's in trouble. Roland Deschain is a gunslinger, one of the last knights of this realm of existence and he's on a quest to visit this Dark Tower, fix whatever is wrong and save all universes and realities in the process. Along the way he gathers an unlikely team to help him on his journey, visits different realms of existence, fights monsters, mutants, demons, robots and even an evil train.

The Dark Tower is Stephen King's most ambitious undertaking and while it gets sloppy and unfocused around book 5, it's one of my all time favorite series of books ever.

I'm going to show the concept pieces first and then return with some thoughts from myself, a self-professed Dark Tower junkie. Be warned, my thoughts will include some speculation that contain book spoilers.

But first, the images from Gregory Hill: 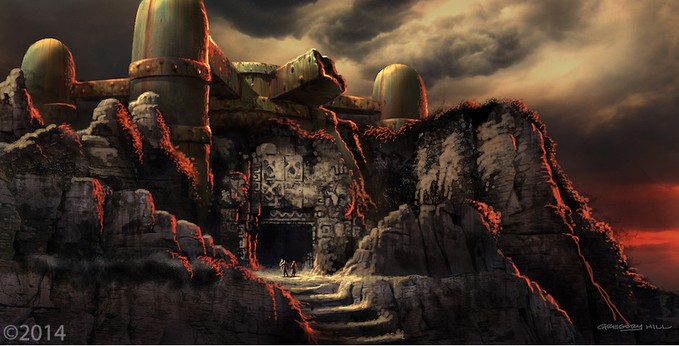 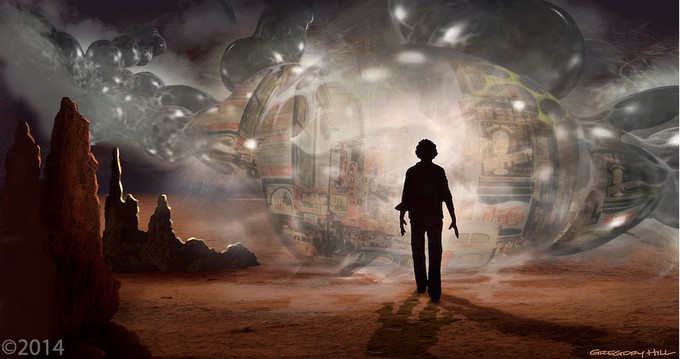 First off... Susannah has legs. What the shit?

When I finished Book 7 of the Dark Tower series I was conflicted. I actually loved the concept of the ending, which didn't go over universally with Dark Tower fans. My issues were in the pages leading up to it, mostly in how The Red King was finally dealt with after many books of building him up.

The idea for cracking a filmed adaptation of Dark Tower hit me pretty quickly upon completing the series. This is a spoiler, in a way, but will probably mean nothing to anybody that isn't already familiar with the books. You start Roland with the Horn of Eld and you then have the freedom to change pretty much anything you want to make what would be a flat out mess if directly adapted into a more cohesive, cinematic story. From what I hear that's exactly what Ron Howard, Akiva Goldsman and the rest of the crew are doing in the adaptation.

That might explain why Susannah, the black lady in the art pieces, has legs. That concerns me because of all the things to change in the adaptation process that one feels the most lazy, reeking of saving money in VFX and making it easier to film at the cost of a truly unique character trait. There's a whole split-personality thing that is tied to the accident that took her legs, too.

I'm going to give them the benefit of the doubt about that doorway image and assume that as thinny represented (literally a thin place between two realities) and not the actual doorways depicted in second book. God, I hope so.

The abandoned town stuff (Tull) looks good, the Mobil piece looks more Fallout than Dark Tower, but I dig it. Perhaps my favorite piece is the Speaking Ring (the ruins looking place). Some really messed up stuff happens there.

I get a bad feeling from these pieces. It's not that Mr. Hill isn't a talented illustrator, but the vibe seems wrong. Maybe I'm letting my fear of Akiva Goldsman fucking this up on the page get ahead of me, but I don't see any of those above images and think “Holy Shit, that's perfect!”

When it comes to The Dark Tower, I'd rather they make it perfectly or not at all. From what I hear they're still plugging away at making the combo movie series/TV series thing work out, but a part of me can't help but hope they try and don't make it work so in four or five years a brilliant storyteller takes it to HBO they do the whole thing there ala Game of Thrones. That's the only way you get the insane sex and violence and weirdness unfiltered.

Usually when pieces of concept art are put online that means they are either rejected or the project is dead. As much as I like Ron Howard as a director, I'm pulling for this to be the latter. I just can't take a misfire when it comes to the Dark Tower.