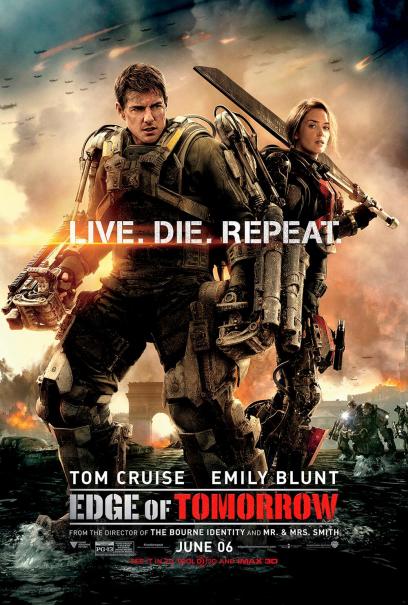 EDGE OF TOMORROW is an engine of entertainment. It's practically the Energizer Bunny of summer movies, but it never feels routine or automated. Every moment seems calculated to thrill, but it also propels the story in exciting ways, and still manages to be organic and unpredictable, even though the plot borrows from many different sources.  Unlike Tom Cruise's previous film, OBLIVION, which seemed like a Cliff's Notes of every interesting science fiction trope of the past 15 or so years, EDGE OF TOMORROW has a rhythm all its own. If you're going to lift from other stories and ideas, at least do it with your own unique style, and EDGE OF TOMORROW definitely has style.

Yes, the film copies the conceit of GROUNDHOG DAY - Lieutenant Cage (Cruise) dies in a massive battle fighting the alien Mimics, only to wake up at the beginning of the same day, over and over.  But while GROUNDHOG DAY explores weighty themes like the reinvention of a wasted life, EDGE OF TOMORROW is much more interested in the mechanics.  As Cage navigates his situation, he discovers that every day is a do-over, and, like the videogame ideas that EDGE OF TOMORROW draws from, Cage resets every day, getting closer and closer to his objective.  I'm showing my age a little bit, but imagine having infinite quarters and hours to spend at a DRAGON'S LAIR arcade game, and you get the idea.

What Doug Liman and screenwriters Christopher McQuarrie, Jez Butterworth, and John-Henry Butterworth have done (based on the novel ALL YOU NEED IS KILL - great title - by Hiroshi Sakurazaka) is put that feeling of videogame storytelling into cinema.  We can debate all day whether or not videogames are art, but videogames do have a unique way of telling a story, forcing players to experience the world on its own terms.  Die, and be resurrected, and try again.  You not only further the story, but your own skills and understanding as well.  There are movies made from established videogames that have had varying degrees of success, but EDGE OF TOMORROW may be the first movie that I can remember where the mechanics of videogames plays a major thematic point to the story.

What's especially impressive is that Liman and the screenwriters have crafted a story that we are invested in.  EDGE OF TOMORROW is very engaging, and always fun to watch.  The more times Cage dies, the closer he is to getting the day "right", but he's not without help.  Rita (Emily Blunt) is a heroine of the war, and she knows how to fight the Mimics and take the battle to them.  Cage learns a lot from her, but while each day is a reset for Cage to use to grow in ability, she cannot.  She is stuck in time.  But, it turns out, she has a bit of knowledge about Cage's situation that both Cage and her can use to their mutual advantage.

Tom Cruise can do these kinds of movies in his sleep, but one thing Cruise has always had over other stars of his caliber is that he's not only able to recognize a good script when he reads it, but he also is a true collaborator with his directors.  I've always been impressed with how much Cruise invests himself in these kinds of movies, and he elevates the material by committing to the story heart and soul.  He also has terrific chemistry with Blunt, who commands the screen just as effectively as Cruise does.  Watching the two of them together is a real pleasure, because both devote themselves to the project.

That's why EDGE OF TOMORROW is spectacular summer entertainment - it may be an engine, but it's an engine that's been given a lot of love and devotion by its owner.  Doug Liman keeps things moving briskly, but not so rapidly that the audience can't keep up.  There are times when the audience may feel like they are one or two steps ahead of the movie, but the clockwork script and Liman's direction throw enough curves here and there that are assured and exciting to watch.  Bill Paxton and Brendan Gleeson are also having an infectious good time; Paxton, especially.  His reactions to Cage as Cage begins to repeat time are hilarious.

There are summer movies that simply want to entertain the best way they can, and the audience doesn't feel dumber by having seen the movie.  EDGE OF TOMORROW is smart, action-packed, funny, even moving.  The aliens are visually arresting and the effects work is impeccable.  The action is coherent and impressive.  The performances are riveting, believable, and heroic.  EDGE OF TOMORROW excites both the mind and the heart, the way the best summer movies do.  It's an experience that I'll happily repeat this summer.  Well done.