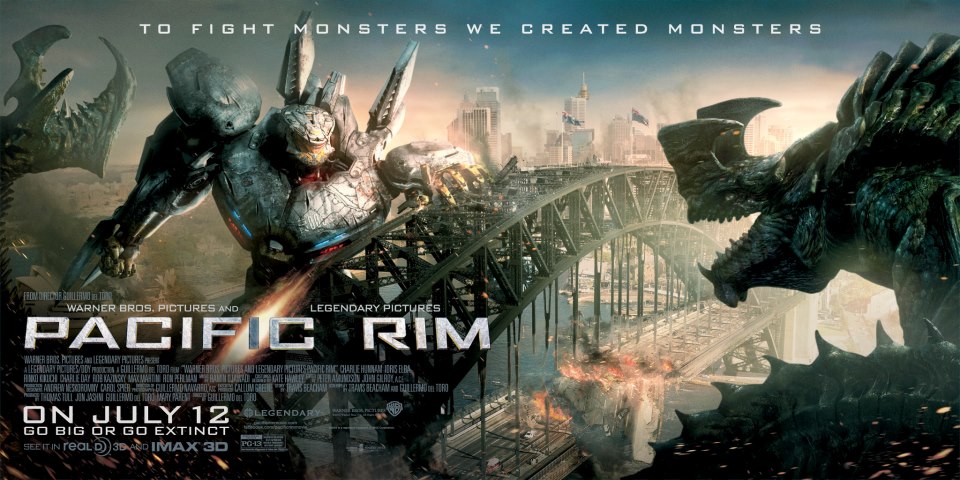 For me, whether or not PACIFIC RIM taps into something universal like STAR WARS or AVATAR did for the larger moviegoing public is irrelevant. I won't be surprised either way, and I've long decided to stop guessing. The need for geeks to see audiences embrace a certain piece of art can be overwhelming, and it really all comes down to the need for said geeks to not feel like they're alone.  That, in the end, there are people out there that think as they do, that take joy as they do, that prove once and for all that there are others that share this crazy compulsion that has them seeking out obscure monster movies or anime or manga. For me, in the end, it's enough that Guillermo del Toro has those same loves and joys that I do, and that he's out there putting them on the screen.  Whether it's for an audience of millions or for one, it doesn't matter.

It's enough to know that PACIFIC RIM got made, and for that I am extremely thankful.  It's grand entertainment, on a scale big enough to amaze and yet still intimate enough to keep all of Guillermo del Toro's wonderful eccentricities on the screen.  It's both epic and oddly personal, and you can tell that del Toro was chomping at the bit to make this movie.  After so many frustrations getting other projects off the ground, del Toro, as well as writer Travis Beacham, leave nothing on the floor and put as much as studio money will allow on the screen. There are images in PACIFIC RIM so striking, so unique, that they will be playing in my mind for days.  This is a case of a movie leaving you wanting more, in a good way.  The same way that STAR WARS left you wanting more, left you wanting to turn a corner and go down a path that the movie doesn't go, that leaves you eager to explore this vast universe that del Toro and Beacham have created.

A Breach has opened up between tectonic plates in the Pacific Ocean floor, and through it come the kaiju, giant monsters of various shapes and sizes to terrorize the planet.  Eventually humanity fights back in the form of Jaegers, giant mechs that take the fight to the kaiju.  And for a while, everything was going well, until a fight between Gipsy Danger, piloted by Raleigh Becket (Charlie Hunnam) and Yancy Becket (Diego Klattenhoff), and a kaiju codenamed Knifehead goes terribly wrong.  Yancy is killed, leaving Raleigh to pilot the Jaeger alone.  The kaiju have adapted to the Jaegers, and know their tactics, and soon Jaegers across the planet are going down.  Stacker Pentecost (Idris Elba) is running out of options - and money.  Countries across the planet are reconsidering the Jaeger program, and erecting giant walls around coastal cities to keep the kaiju out.    Only a few Jaegers are left - China's Crimson Typhoon, Russia's Cherno Alpha, Australia's Striker Eureka, and the United States' clunker, Gipsy Danger.  Pentecost has eight months before his budget runs out, and so he tracks down Raleigh to return him to the Jaeger program.

Most modern blockbusters would have Raleigh fretting over returning to combat duty, but PACIFIC RIM refreshingly avoids those angst-ridden scenes.  Raleigh isn't reticent - he's wary because of the loss of his brother, but he's still willing to take the fight to the kaiju.  He needs a partner though, because Jaegers cannot be piloted alone - the power capacity is too much for one pilot to handle.  He sees a potential co-pilot in Mako Mori (Rinko Kikuchi), a young woman who has experienced the terrors of the kaiju first-hand, but Pentecost is having none of it.  He thinks that Striker Eureka, the Jaeger piloted by father/son team Hercules Hansen (Max Martini) and Chuck Hansen (Robert Kazinsky) can get the job done without her.  A rivalry between the Gipsy Danger and Striker Eureka teams keeps everyone on edge, but they don't lose sight of their goals - to close the Breach in any way possible.

Meanwhile two scientists studying the kaiju are concerned because the attacks are becoming more frequent.  Gottlieb (Burn Gorman) calculates that very soon more than one kaiju will emerge through the Breach, and then three, and then four, and more until they destroy all life on the planet.  Dr. Newt Geiszler (Charlie Day) is convinced that he can figure out a way to find out the motivations of the kaiju, but his plan is so radical that no one accepts it.  But Earth is running out of time, and with only a few Jaegers left, Pentecost must take drastic action - actions that he is reluctant to consider.

From the prologue setting up the stakes, PACIFIC RIM doesn't let up - there is a steady flow of information that informs the audience about the world that del Toro and Beacham have created.  For some, it may be too much, but I have a sneaking suspicion that the 8-year-old child in everyone, hopped up on sugary cereals and watching Saturday morning cartoons, will have no difficulty keeping up.  But PACIFIC RIM also doesn't forget the people - I've read many complaints about how the characters take a back seat to the spectacle, but I simply didn't find that to be the case at all.  I especially love Rinko's Mako Mori, who is both sympathetic and strong, and her character's journey from young child frightened of the kaiju to steadfast warrior was very compelling.  Charlie Hunnam's story is probably utterly familiar to anyone who has ever seen a movie before, but to his credit (and to the credit of the script) Raleigh isn't a cliched reluctant hero.  I loved Idris Elba's Stacker Pentecost (an aside, I just love the character names of PACIFIC RIM. Anyone who has problems with them should try repeating Luke Skywalker to themselves a few times), a man running out of time in more ways than one.

Day's Geiszler is funny and goodhearted, but he doesn't quite steal the movie.  Ron Perlman's Hannibal Chau does that quite nicely - he's a dealer in kaiju parts, and Perlman and Day seem to be having a great time together.  That's one of the many charms of PACIFIC RIM - it gets downright silly at times.  I miss silly.  When's the last time a movie did silly right?  We're all so dignified and too insecure to take in a movie just willing to be goofy for goofy's sake.  Those are the moments where I really embraced PACIFIC RIM - I don't think I've been as charmed by a movie in this manner since SPEED RACER.

But don't be mistaken - del Toro brings the scale and the action.  The Battle of Hong Kong is one of the most tremendously satisfying and visually amazing action sequences I've ever seen.  That's a fact.  From the little moments, like a tiny desk ornament being touched by a Jaeger, to the tag-team wrestling match off the coast of Hong Kong, everything is done perfectly.  It's done so well, in fact, that the scale of the climax suffers, but that's okay.  There's that "leaving the audience wanting more" again, and in a good way.  In a way that guarantees that I'll be seeing this movie many times in the future.  It's beautiful, in its way, the way that the images of PAN'S LABYRINTH and the giant green nature god of HELLBOY II are beautiful.  It's pure del Toro, given all the tools and the paintbrushes that he wants, and he doesn't skimp at all.

One aspect of the film - the Drift that takes place between pilots as they maintain a Jaeger - I wanted more of, too, and I wish it had been addressed in more detail.  One particular sequence is talked about onscreen but not shown, and I think the movie would have been improved had they simply shown it in the Drift instead of having Raleigh describe it.  If there's a sequel, I would certainly welcome more on the Drift, because I thought when it worked it was a remarkable visual shorthand for character arcs and motivations.

I loved the varying kaiju, which seemed influenced from every movie monster imaginable and yet felt unique.  I loved the world, and would love to see it explored more in any future books or films.  I loved the characters, who were refreshingly full of hope for the future, even when things were at their most bleak.  PACIFIC RIM assures us that there are no insurmountable obstacles that can't be overcome (or punched in the face by a giant mech, anyway).  In a world where people would rather wall themselves away, denying our problems without trying to solve them, the idea of a group of men and women willing to risk everything to find a solution is a message every child should know.  Humanity can solve any problem that comes our way.  There is nothing we can't accomplish.  I love science fiction, but I'm tired of this dystopian idea of a world that falls apart because we can't defeat our baser natures.  PACIFIC RIM will have none of that.

As I said before, who knows what audiences will make of this.  Who knows what dreams PACIFIC RIM will inspire in a young girl, sitting in the crowd, seeing amazing visions and embracing beautiful ideas.  But that's what makes it wonderful.  I have no idea what will come next.  That's a good thing, if you have the courage.  Yeah, you can say I loved every frame of PACIFIC RIM.  It's the best movie of the summer.  Cynics need not apply.