Nordling Reviews THIS IS THE END! 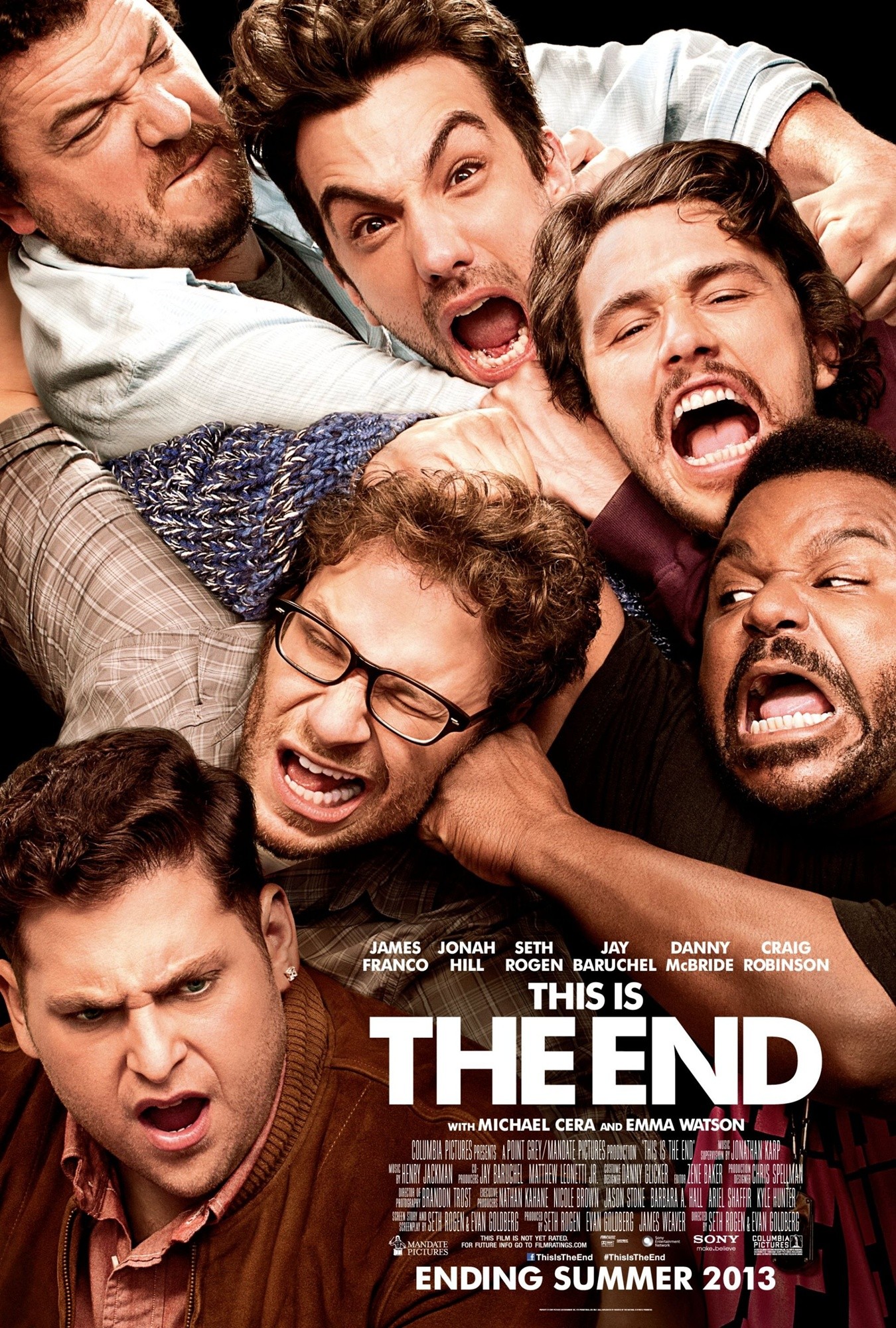 It's easy to chart the shelf life of great comedic writers and actors.  I doubt anyone would dispute, for example, that the heyday for the Saturday Night Live crew when it comes to movies is the late 1970s/early 1980s, when guys like Bill Murray, Chevy Chase, Dan Aykroyd, and John Belushi owned the box office, and Eddie Murphy was just coming into his own.  There were identifiable moments of greatness for all those performers/comedians, and audiences loved their work.  Then you chart what's happened since, and while people like Bill Murray have made the transition to more serious fare, and others have had varying degress of success, you can, as Hunter S. Thompson put it, "almost see the high-water mark - that place where the wave finally broke and rolled back."

Seth Rogen and Evan Goldberg are both fantastic writers of comedy; you can make an argument against that, I suppose, but they have quite a few terrific movies between them to back that up.  THIS IS THE END isn't the high-water mark, I think, but you can see the tide coming in, and it's going to be a doozy.  It's going to be extremely fascinating to see where these new comedic guides - Rogen, Goldberg, Jay Baruchel, James Franco, Craig Robinson, Jonah Hill, and Danny McBride - go from here.

So am I comparing THIS IS THE END to classic movies like ANIMAL HOUSE, CADDYSHACK, GHOSTBUSTERS, or STRIPES?  I guess I am. Accuse me of hyperbole if you like, but it's rare when comedies like this stick with me as long as THIS IS THE END does.  It resonates with a great story about friendship and belief, and I bought into it fully.  THIS IS THE END works because it has no fear, and because it makes us care about these egotistical, superficial people, and invests us into their lives.

Seth and Jay have been friends forever, but while Jay's met with some success, it's Seth's career that's really skyrocketed.  Jay doesn't resent Seth's success, but it's undeniable that their friendship has changed from the days when they could get stoned and play video games all day.  Seth lives his life in Los Angeles, with friends like James Franco and Jonah Hill, while Jay's happy living his life and making his comedy in Canada.  Jay comes to visit Seth in Los Angeles, and Seth is caught between his old life and the new one.  When Seth invites Jay to a party at Franco's house, Jay is reticent to go, but he wants to salvage his friendship.

But it becomes obvious to Jay that Seth isn't the same guy anymore, and when Jay decides to bail on Franco's party - for one thing, Michael Cera is acting like the complete sex-crazed coke fiend that we all know he is - Seth and Jay argue about what's become of their friendship.  It's in the middle of the argument that the completely unexpected happens - it's the Apocalypse, and Jay and Seth run back to Franco's house to take refuge with him, Jonah Hill, and Craig Robinson.  It's clear to Jay what all this means, but for the rest of them, the idea that this really may be the end of the world just can't seem to penetrate their egotistical, self-absorbed minds.  It also doesn't help when Danny McBride joins the group and they all have to deal with the incresingly bizarre happenings around them.  It becomes a test for each of them to try to survive - but more importantly, will Seth and Jay's friendship survive?

I will, of course, not spoil the many hilarious moments of THIS IS THE END, and if you haven't seen any trailers or clips, you should keep it that way.  Everyone - and I mean everyone - gets several moments that had me gutlaughing for a few minutes.  What happens to Jonah Hill in this movie will probably stay in my mind for some time to come.  There's also some great effects work by Greg Nicotero that must be seen, and there are moments in the movie that reminded me heavily of the lunacy of movies like EVIL DEAD 2, where the humor and the horror mesh together so well.

The third act of THIS IS THE END goes completely off the rails, in a good way, and I love how the cast and Seth Rogen and Evan Goldberg commit to the premise fully.  I'd even go so far to say that they seem to tap into something quite universal with their end-of-the-world visions, and since this movie's Apocalypse plays specifically to the Christian faith, the religious aspects make everything that much funnier.  Seems that every television preacher was right, and Rogen and Goldberg know how to play with that imagery and make it work in horrific and funny ways - often at the same time.

But the movie works so well because directors Rogen and Goldberg commit to the friendship and the relationships between the characters, as do all the actors.  Much of THIS IS THE END may have been improvised, but it never meanders.  The movie knows exactly where it wants to go, and if it makes you laugh while it gets you there, more the better.  Watching Michael Cera play completely against type (as far as we know) is just one of the movie's great moments, and Emma Watson shows us that she's got pretty great comedic chops as well.  There's a great cameo that I wouldn't spoil for the world (although it's not completely out of the blue once you see the movie).

But THIS IS THE END never forgets its central themes and goals.  It's in the movie's final, triumphant moments that everything clicks into place, and the audience sees when Seth Rogen and Evan Goldberg have done - they have made a great movie about friendship, love, and tons of masturbation jokes.  Kevin Smith used to do this pretty well - these guys do it far better.  I think it's because you could easily see, through all the laughter and special effects, that these ideas about friendship in a time of flux really strike a chord in both Seth Rogen and Evan Goldberg.  These are conversations they've probably had over the years, albeit not surrounded by demons and hellfire.  That's why these relationships feel honest; Rogen and Goldberg may not have lived through the Apocalypse, but they seem remarkably savvy when it comes to how friendships can grow apart because people walk different paths in life.  The laughs will make the audience stay, but it's the insights into people that make THIS IS THE END truly resonate.

THIS IS THE END feels like a definitive comedy work, and twenty years from now, when we look back on these guys' careers, it will be one of those movies that, hopefully, people won't point to and say "These guys never got any better than that."  The tide is still coming, and there's no high water mark in sight.  Not yet.