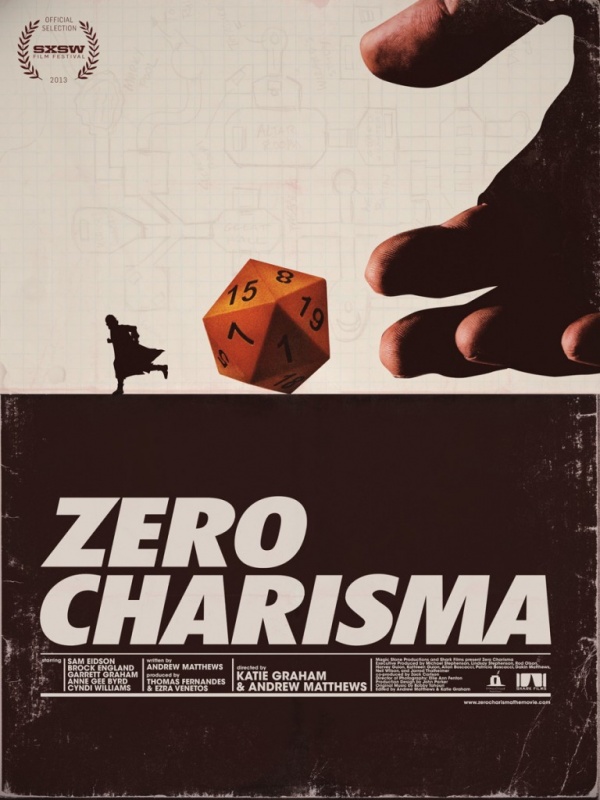 ZERO CHARISMA spoke to me.  Perhaps it's because I felt like I knew those characters intimately, or saw myself in them.  I've been Scott Wiedemeyer (Sam Eidson) a few times in my life, retreating into the safe worlds of fantasy when reality was just a bit too difficult to cope with.  I once wore a T-shirt that said THAC0 on it.  And I was a grown-ass man.  That's how nerdy I was - hell, that's how nerdy I AM.  I feel lucky that I've managed to find a wonderful wife who is willing to put up with my eccentricities and passions, becase if I didn't, I very well may have ended up like Scott does in ZERO CHARISMA - too lonely to realize that he's alone, and too frightened to do anything about it.

In the epic worlds he has created in his mind, Scott is lord and master.  He creates his story and the other players who join him in his weekly role-playing game night are like those ancient people that sat around the campfire as Scott spins his tales.  It's the only place in the world that Scott can feel comfortable.  Outside of it, though, he's invisible to the world at large.  Outside his circle, he's just an oversized buffoon with a crappy job, no social skills to speak of, and barely any friends, except Wayne (Brock England), who's more of a lackey than anything.  Scott lives with his grandmother, who thinks Scott's "elves and fairies and shit" gaming is a pointless endeavor, but she puts up with it.  Scott lost his job at the local gaming store because of his abrasive personality, but he couldn't give a shit.  Now he works at the donut shop, but he considers his real goal in life to be gaming.  He lives for it.

A few things happen, however, that shake up the one thing Scott has complete and utter control over.  First, one of the gamers up and leaves his group due to marital troubles ("I hate to be the one to tell you this, but your wife's a bitch," Scott tells him in what Scott thinks is a kind and generous manner), leaving Scott one person short for their gaming group.  Second, Scott's grandmother (the wonderful Anne Gee Byrd) has a stroke, and while Scott thinks things can go on as they always did, his flighty mother Barbara (Cyndi Williams) comes to town determined to get right with her mother and son.

For Scott, the game is everything, and when Miles (Garrett Graham) joins the game, at first he thinks everything's going to be fine.  But while Scott is a nerd in the truest sense - because he has nothing else - Miles is simply a dabbler.  He knows his geekstuff - he runs a popular site called GeekChic - but he's also socially functioning, with a girlfriend and income.  For Miles, the game is just another piece of entertainment, but for Scott, it's his whole world.  And Miles is much more likable than Scott could ever be, easily making friends among the group and threatening Scott's reason for being.  The one thing Scott has is slowly being taken away, and he does not react well.

Sam Eidson is triumphant as Scott.  It's a far more nuanced performance than it seems to be on paper - Scott is a very unlikable person, but Eidson shows us the very wounded child inside, even if in fleeting moments.  Anyone who's ever made gaming a part of their life at some point  knows someone like Scott, and Eidson and directors Katie Graham and Andrew Matthews find universal truths in the character.  For anyone who has been an introvert, trying to find their place, Scott will possibly hit too close to home.  Scott refuses to believe that he is the problem - it's the world outside that keeps wanting to wreck the one thing he has that belongs to him, where he can truly be at peace.

For Scott, hell is other people, but ZERO CHARISMA is no dour exploration of the nerd.  It's hilarious, even when it cuts to the bone.  ZERO CHARISMA is never mean-spirited, but it does find its humor in Scott's plight and the general social difficulties of nerds.  It even has something to say about old-school versus new-school nerds - for Scott, his passions are the only way he can live, while Miles is just into it for fun.  Everyone has their church, their temple, and while Scott's may be ridiculous to the world at large, it's HIS, dammit, and he's going to fight for it.  ZERO CHARISMA is a film that understands that for many people, being a nerd isn't a societal choice, but the only way some people can navigate this cruel, complicated world.  We have empathy for Scott even at his worst, and Eidson does extraordinary work.  He doesn't treat Scott like a caricature, like so many other actors would have.  And in doing that, the laughter has a feeling of emotional truth.

What's wonderful about ZERO CHARISMA, one of the finest movies to play at this year's SXSW festival, is that it assures people like Scott - hell, people like myself - that everything really is going to be okay.  You'll never know unless you roll the dice and take that initiative.   In the end, Scott takes steps - baby steps to be sure - to engage the larger world, but he's going to do it on his own terms, and no one else's.  He's a hero for the dice-slinging set, for anyone who has ever felt safer in the worlds of their mind, who cannot function otherwise without it.  And while Scott is no role model, he's a character that a lot of people will identify with.  Perhaps Scott's problems will shake people out of their own difficulties and issues.  Or perhaps Scott will simply reinforce those shields.  Either way, ZERO CHARISMA is geek heaven.  No one who self-identifies as a nerd should miss it.