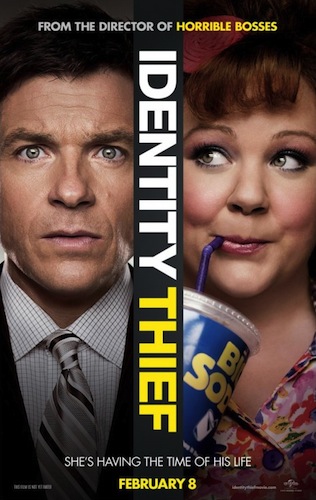 You'd think that with the amount of talent he's put together over his past couple of films that Seth Gordon would have been able to turn around a quality comedy for us to laugh at and enjoy with ease. However, since breaking onto the scene with the fantastic documentary THE KING OF KONG: A FISTFUL OF QUARTERS back in 2007, it's been nothing but mediocrity one effort after another. That's not to say that his films have been downright terrible, as they've had a couple of moments scattered throughout to leave you wondering what could have been... but isn't that almost worse than just making a movie that's awful from the start? FOUR CHRISTMASES was just a few Christmases too many. HORRIBLE BOSSES... simply put, not enough bosses. But IDENTITY THIEF... Oh, IDENTITY THIEF... it's almost as if you tried really hard to top Gordon's previous two efforts when it comes to being incredibly unfunny. Unless you really want to count the one chuckle I let out watching a grown man floor a grown woman using an acoustic guitar or the brief smirk that came across my face in the film's closing moments over a humorous name, I sat stone-faced through IDENTITY THIEF, wishing someone else could have taken my identity for those painful couple of hours, as it would have meant them suffering through the movie instead of me. IDENTITY THIEF tries so desperately to be MIDNIGHT RUN, and it tries so desperately to take some ideas from PLANES, TRAINS AND AUTOMOBILES... and, in the end, the only thing it has in common with those films is that it makes you want to run home right away and watch them, so you can see how the buddy road formula is done correctly, washing the bad taste out of your mouth.

Jason Bateman plays Sandy Bigelow Patterson, which is supposed to be funny, because it's a bit of a feminine name by the film's standards, except for Bateman's claims that it's unisex. You know it's supposed to be funny, because Craig Mazin's script insists on beating you over the head with the same exact joke about seven or eight times until it's dead, only there wasn't much life to the attempt in the first place. But you get the drift, which is how a lot of IDENTITY THIEF goes. Anyway, Sandy is a good-hearted, trusting family man who always tries to do the right thing by himself, by his wife and by his kids, which usually just leads to him getting walked all over. Nice guys finish last, remember? However, it also means he's not exactly the brightest, as right at the film's outset, he's on the phone giving his name, birthday and Social Security number to what sounds like a solicitation for a free security protection plan from his credit card company, but turns out to be a woman who otherwise goes by the name Diana (Melissa McCarthy). Armed with his now compromised information and her credit card maker, she's pumping out a number of cards that are going to savage his moderate income to the tune of $12,000, not to mention the arrest warrant that is now out for him after he missed a court date that she earned by drunkenly assaulting a bartender. However, in order to save his brand new job and what's left of his family's finances, Sandy can't just wait for law enforcement to bounce her around the system in order to right the wrongs. That may take six months to a year, if even that soon. So Sandy has the "brilliant" idea of going down to Florida and bringing Diana back to Denver himself for some contrived sting operation that would have her confessing her wrong-doings. Obviously that's going to be easier said than done, as he couldn't expect her to go along willingly and without incident, could he? 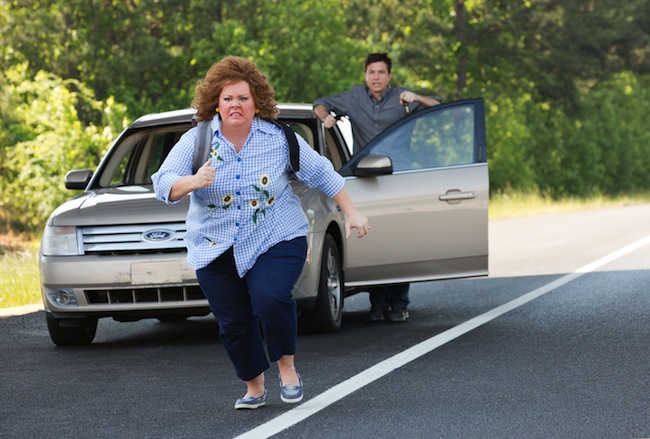 From there, it's your typical hijinks, with one character pissing off the other at all times in this mismatched road trip of errors. The original plan of taking a flight isn't going to work, as you can't have two people showing two different IDs with the same name on it. Homeland Security would have a field day with that, so it's rental cars and stolen vans and walking and anything and everything possible to not get them back to Denver in a reasonable amount of time, stretching this film out much longer than it needs to be. This is only driven home by the fact that the con woman McCarthy comes to realize how badly she is hurting this poor guy's family at one point when his phone rings and she sees the screensaver of his cute daughters about halfway through the movie... but it's impossible for the film to let her go along with him easily at that point, making sure to to introduce a bounty hunter of sorts (a wasted Robert Patrick, who should be above this kind of movie) and a pair of hit-persons (Genesis Rodriguez and the rapper T.I.) to chase after them and keep the pain going. Tonally, IDENTITY THIEF is all over the place by trying to bring in all of these elements to try to make it look like the road trip from hell, but it becomes more of a case of the film not really knowing what it wants to be, because it strays so far at times from its original premise that it becomes hard to wonder why everyone in the movie is too stupid to think about getting on a bus or a train for a straight uninterrupted shot home until it's too late for such an option to even be considered. It's as if these characters do everything in their power to go off looking for trouble just to keep the movie going.

Poor Jason Bateman continues to get saddled with these atrocious films, and for an actor with some strong comedy chops, you feel bad to see him trying to make something good from this dog shit. However, once again going back to the mess IDENTITY THIEF is, the film can't even let his character remain as the wholesome and morally good one throughout his pairing with McCarthy. Short a few tanks of gas to actually get home and be successful on his endeavor, he actually resorts to the behaviors that he went after Diana for in the first place. He shouldn't be treated as some sort of hero for attempting to steal the identity of his former boss, an asshole who screws his employees out of bonuses, so he can cut big checks for himself. Does the movie not remember that he himself was the victim of identity thief? So why would he then perpetrate such a crime on someone else? What happened to the moral compass that is supposed to make the audience root for this guy? It gets pissed away when the movie is grasping for comedy material, because... HAHAHA!!! Rich guy getting ripped off must be downright hilarious in this current economic climate, especially if it means the bastardization of your movie's heart. Good one. But then we'll conveniently switch it back when Sandy may just be too good-hearted to turn Diana in at the end of it. Yeah... a heart of gold, unless it's inconvenient for the film. What else is new? 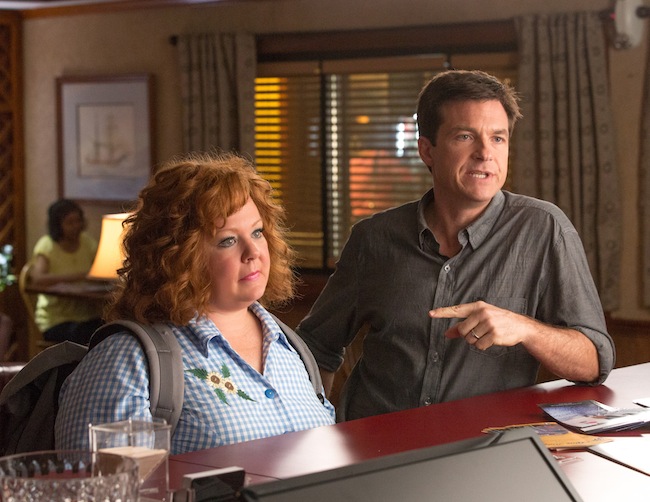 McCarthy is, at times, the one bright spot of the film, but only for a little while when she's operating on a totally different level than everyone else in the movie. For at least a little bit, McCarthy is a soulless, heartless bitch, who prays on the sympathies and weaknesses of others, in order to get what she wants, whether it's a climbing wall in her backyard, a land-locked jetski in her frontyard or a full rack of ribs on her plate. People have never seemed to care about her, so why should she bother caring about them? Fuck 'em. There are some really good flashes of McCarthy going to some very dark places while everyone else is trying to see the good nature in each other, and, it's in those moments where IDENTITY THIEF shows what it could have been, especially if the whole movie struck such a unforgiving chord. Look no further to Diana's sob story about her childhood and upbringing to see how twisted she can get if it means getting her what she wants. But the rest of the film doesn't come close to Diana when she's feisting on such feel-good prey. It may not be funny, but for at least a couple minutes, IDENTITY THIEF is interesting.

IDENTITY THIEF seems to do everything wrong along the way, and, even when you think there might be some hope for it, it does something to completely negate this minimal progress, like shove a snake in someone's pants or offer up no consequences whatsoever for someone's bad decisions. You know things aren't going well when the highlight of the movie is Jonathan Banks shows up for a few moments, and you light up remembering his better days as Mike on BREAKING BAD. Melissa McCarthy stealing the identity of Jason Bateman...? On paper, that's a hilarious concept. In execution, on-screen, it's a mess.