A while back, one of my posts dealt with a burgeoning conspiracy theory that Ridley Scott's ALIENverse - most notably PROMETHEUS - would somehow interconnect to his 1982 BLADE RUNNER film, whose universe is also being revisited by the director in the not-too-distant future.

Some Geeks immediately fell in love with the notion of this interconnected universe. Others found it silly fanboy theorization and wankery.

THIS new piece over at ScreenCrush now reveals that the BLADE RUNNERverse and the ALIENverse were/are, indeed, closer to being formally / officially connected than any of us were aware.

An eagle-eyed Reddit user caught a glimpse at the below text, written by character Peter Weyland (Guy Pearce), which seems to indicate that Weyland’s mentor was a certain replicant-creating tycoon whose creations eventually got the best of him. Check it out: 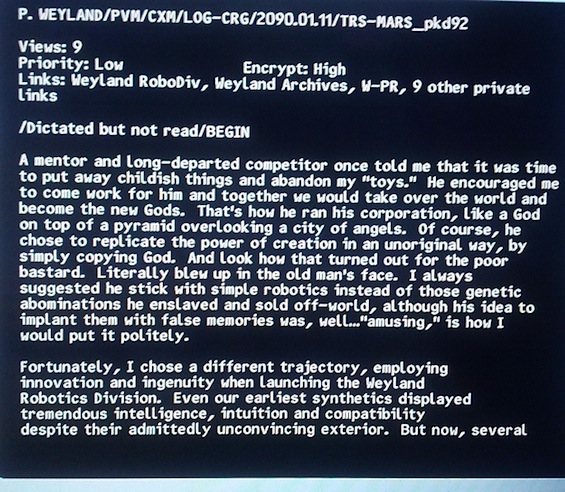 But that's not the extent of the matter.  THIS piece at FirstShowing indicates:

Update: There's more! Thanks to reader @stephenstaunton there's apparently a "Supplementary Pod" on the Blu-Ray as well that really makes big hints at this cross-universe as well. So it may be real? Check out this screenshot below from one of the featurettes titled "Merging Ridleyverses" - not obvious enough yet? Here's part of a transcript he sent me: "There's one idea that I'm very sad that we didn't do. Ridley, one day, came in and said, "You know, I'm thinking what if it's the Weyland-Tyrell Corporation? Is that cool?"

The information comes from concept artist Ben Proctor, who is talking in the "Merging Ridleyverses" featurette. He continues with more on Ridley's ideas: "Maybe the bodyguards, you know, that come out with Weyland, maybe one of them says Batty on his uniform. And we're like "Awesome! Do it, do it!" 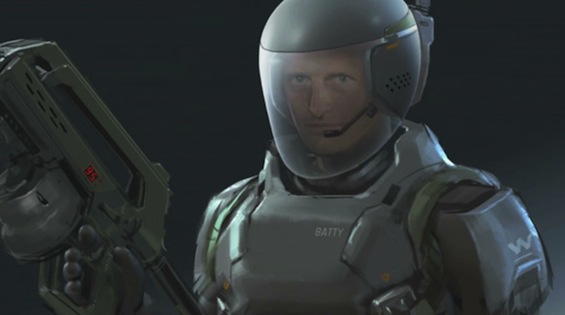 So there you go.  I can't begin to express how much I wish Scott & Co. had moved forward with this.  Truthfully, I generally detest crossovers of this nature.  But this one, somehow, makes so much sense!  And, at the risk of sounding defensive and annoying (moreso than usual, at least),  I simply must take one teeny-weeny moment to say: "See! I wasn't crazy!"  Damn naysayers ;-)

The amazingly awesome PROMETHEUS Blu-ray  - choc full o' expansive extras and a large amount of deleted material which begins to answer at least a few questions left over by Scott's arguably oblique Summer extravaganza - hits tomorrow. I haven't explored the Blu in full yet, but I've been extremely impressed by what I've seen thus far.  An amazing looking, very fine, fine product for an admittedly divisive - albeit utterly intriguing - film whose setting and characters will evidently see a forthcoming sequel.

Be sure to click the links above to explore these recent revelations further...