Nordling Says Oliver Stone's SAVAGES Is A Hell Of A Fun Time! 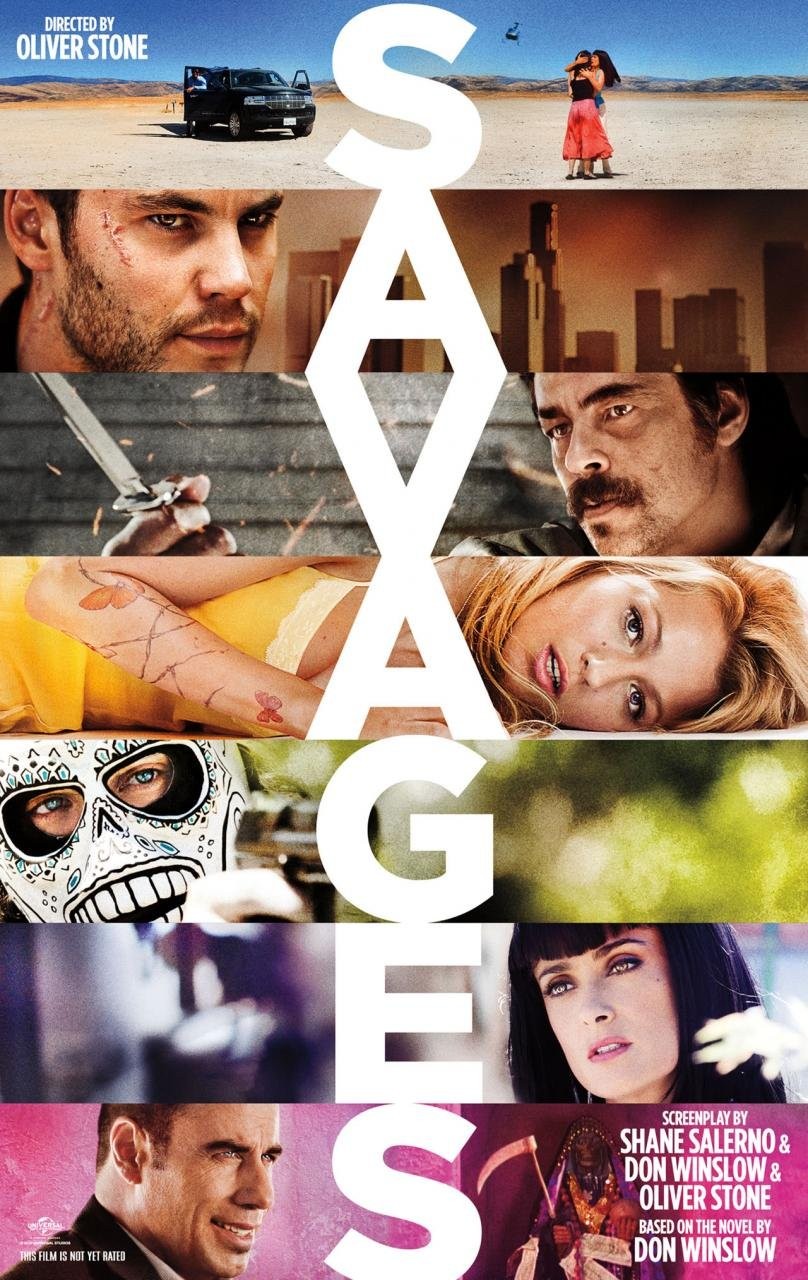 SAVAGES is a stunning return to form for Oliver Stone.  This is Stone in SCARFACE mode here (he even opens the movie with a massacre that’s very reminiscent of the shower scene in SCARFACE) and SAVAGES feels like Oliver Stone in his heyday, just trying every damn thing that will stick and just reveling in the joys of filmmaking once again.  There are moments in SAVAGES that are pure cinema – some don’t work, but most do, and it’s all due to Stone’s willingness to try anything cinematically.  It really is Stone’s best movie in a very long time.

Based on the novel by Don Winslow, SAVAGES is about two high school friends in the pot business – one of them, Ben (Aaron Johnson) grows and sells it, and the other, Chon (Taylor Kitsch), a former soldier in Iraq and Afghanistan, is the muscle for when things go south.  The love each other like brothers (and perhaps even more than that) and the third person in their circle is O (Blake Lively), a once-spoiled rich girl who loves them both.  As expected from an Oliver Stone movie, the film makes no judgments about this threesome, and O, Ben, and Chon love each other deeply.

Their marijuana crop is doing big business, and as such it gets them the attention of the cartels in Mexico, specifically the cartel led by Elena (Salma Hayek).  She wants a piece of the money these kids are making, but they’d rather not partner up with anyone just yet, especially someone known for their violence.  But Ben and Chon have very little choice in the matter – Elena orders her right-hand man, Lado (Benicio Del Toro) to take O for ransom, and Ben and Chon have to improvise and figure out how to get her back.  Even a corrupt DEA agent on Ben and Chon’s payroll, Dennis (John Travolta) can’t help them stop Elena’s cartel, so Ben and Chon have to play everyone against each other if they hope to see O alive again.

Aaron Johnson has changed quite a bit since his KICK ASS days, but he’s terrific, and although Taylor Kitsch has had a rough time of it this year at the box office, he holds his own here.  Ben and Chon are closer than brothers and Johnson and Kitsch complement each other’s performances nicely.  However, the two grand performances of the film belong to Benicio Del Toro and Salma Hayek.  Del Toro is loathsome and out for himself, and will stop at nothing to get what he wants, and he does it with such a maniacal glee that you can’t help but root for him a little bit.  He’s obviously having a great time with the role.

But the truly iconic performance of the movie belongs to Salma Hayek.  As head of the cartel after her husband’s death and the deaths of her sons, she is holding on with both hands to what is left, and if taking down these two kids with their superior weed is what it takes, she’ll ruthlessly hunt them down and take what is hers if she must.  And yet, there’s an interesting dichotomy as she seeks to have a relationship with a daughter who wants nothing to do with her.  You can see the cracks in her armor but she can’t allow compassion to cloud her judgment or get in the way of her ambition.  It’s a meaty role and Hayek dives in without reservation.  You can’t take your eyes off her when she’s onscreen, because you truly don’t know what she will do next.  Elena is at constant war with herself, and once the boys find her weakness, she unleashes her wrath on anyone who gets in her way.

John Travolta's Dennis is appropriately sleazy but even he has motivation behind his manipulations.  Emile Hirsch, as Ben and Chon’s surfer accountant, is also very good as the boys slowly get in over their head. Demián Bichir is also quite good as Alex, Elena's representative to the indie drug growers.  The script, by Shane Salerno, Don Winslow, and Oliver Stone gets the cadence of the book right, but more importantly, gives characters that were in the book more room to breathe.

But the true star of the movie is Oliver Stone.  This is Stone invigorated – the wonderful cinematography of Daniel Mindel uses all sorts of colors and fades, and Stone knows when to ramp up the tension and when to dial it down.  Stone takes Don Winslow’s book and turns it inside out – people hoping for a page-by-page rendition of the novel will likely be disappointed, but Stone is allowed to dive into the material and play.  This is, in fact, the most playful Stone’s been in years.  SAVAGES is just fun, and you can tell Stone really enjoys spending time with these characters and this story.

Oliver Stone even has the audacity to change the ending from the book in such a way that it is certain to polarize fans of the book versus fans of Stone’s work.  But the ending is almost literally Stone having his cake and eating it too, and I enjoyed that Stone had the guts to do it.  This is Oliver Stone cut loose from the politics (although I can say that the contextual theme of the movie is that if pot were legal, none of these people that we enjoy spending all this time with would have to meet their violent ends; I am under no illusions where Stone stands on the legalization of marijuana from this movie alone) and just having fun with rich characters, intense situations, and playful filmmaking.  I’ve missed this filmmaker for quite some time, and hopefully the Oliver Stone that we loved and respected as a major director is back and here to stay.  SAVAGES may be the most surprising film of the summer – if you’re not utterly married to the source material, I think savvy film audiences will enjoy the ride that Oliver Stone takes them on.