Simon Pegg Says The Villain Of STAR TREK 2 Is... 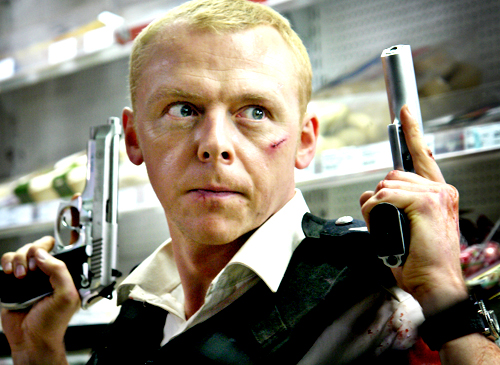 Beaks here, first with an apology for the horrendously misleading headline, and secondly a link to this lovely Telegraph profile of Simon Pegg, in which the very fine actor vehemently denies that Khan Noonien Singh is the villain in J.J. Abrams's STAR TREK 2. Here are the two salient paragraphs...

This time, Pegg isn’t the only Brit in the world of Starfleet. Benedict Cumberbatch has been cast as a villain. Pegg is full of praise for Cumberbatch’s baddy, whom he describes as “not just another disgruntled alien. It’s a really interesting… sort of… thing,” he squirms. “Obviously I can’t talk about it.” Given internet rumours that Cumberbatch has been cast as Kirk and Spock nemesis Khan, will this be a very different “wrath of Khan” from the 1982 film of the same name? “It’s not Khan,” replies Pegg, annoyed. “That’s a myth. Everyone’s saying it is, but it’s not.”

Is that misinformation from the famously secretive Abrams camp? “No, I think people just want to have a scoop. It annoys me – it’s beyond the point to just ferret around for spoilers all the time to try to be the first to break them,” says Pegg, a fanboy’s fanboy who wrote an autobiography called Nerd Do Well and who seems to have forgotten that part of the thrill of being a comic book/film/sci-fi fan is about getting as many details as possible in advance. “It just spoils the film,” he complains. “It masquerades as interest in the movie but really it’s just nosiness and impatience. You just want to say, ‘Oh f--- off! Wait for the film!’”

This, of course, goes directly against Latino Review's typically reliable sources, who claimed last year that Khan was the big baddie. Abrams has denied this up and down, but some have suggested that he's leaving himself wiggle room - i.e. Khan may be in the movie, but not the villain. Pegg's comments seem to definitively kibosh any notion of Khan turning up in STAR TREK 2. Seeing as how I trust Pegg impicitly, I'm willing to consider the Khan case closed - which is a relief. I don't want WRATH OF KHAN REDUX.