This Friday Docback Is A 'Carnival of Monsters'!! DOCTOR WHO Story #66, And More!!

In the early 1970s, Delia Derbyshire and Brian Hodgson re-recorded the iconic DOCTOR WHO theme.  The result was not well-received and the previous version was ultimately retained.  This embed features that abandoned recording over the era's opening title sequence.  More details below.

Merrick here...
...with a look at “Carnival of Monsters,” a four part Pertwee-era story originally transmitted January - February 1971.
"Carnival of Monsters"
“These creatures may look like chickens, but for all we know they’re the intelligent life form on this planet...” - the Doctor, 'Carnival of Monsters' Episode 1
On Inter Minor - a planet populated by humorless, scheming, procedural, fussy, paranoid, germaphobes - interstellar showman Vorg (Leslie Dwyer) and his saucy assistant Shirna (Cheryl Hall) arrive to entertain the local populous.
Concurrently, the Doctor (Jon Pertwee) and companion Jo Grant (Katy Manning) materialize on the SS Bernice - sailing the Indian Ocean, on June 4 , 1926 - the day history recorded the vessel’s unexplained disappearance.  Time on Bernice appears to be looping, it’s daylight outside when it should be night, and a Plesiosaurus - extinct for 130 million years - is attacking the craft in recurring events unfolding at predictable intervals.
This being DOCTOR WHO,  these seemingly disparate happenings do, of course, connect.  Revealing the Bernice to be a stepping stone to a far greater adventure which not only brings with it severe moral implications, but the dangerous truth that the ‘reality’ the Doctor and Jo are currently perceiving is very far removed from what’s actually happening around them...
It sounds disparaging to say "Carnival" 'is what it is,' but there's really no better way to describe this Robert Holmes scripted, Barry Letts directed installment.
Thin on macro concepts but thick with quick payoff gags and concise set pieces, "Carnival" is solidly entertaining, but frustratingly vacant - a pity given that Holmes would ultimately script “The Talons of Weng-Chiang” (T. Baker, Story # 91) and “The Sun Makers” (T. Baker, Story #  95)  - two of the most substantive, significant, and socially observant DOCTOR WHO stories ever created.
But this isn’t to say “Carnival of Monsters” is wholly frivolous.   Fueled by conceits which would later be explored by titles like THE MATRIX and TRON, “Carnival” does indeed nudge at resonant thematics from time to time...just not as clearly or effectively as the later Holmes stories cited  above. When one penetrates the fluff of it all,  “Carnival” speaks to the realities we create for ourselves...both accidentally and intentionally, as individuals and as a collective of living beings.  It looks at how we perceive these realities, and how we react when our realities are challenged.  In essence, many elements here are parables of the human condition - a tremendously vital conceit in good Science Fiction, and a long-standing tenet of DOCTOR WHO.  Alas, in “Carnival” it’s all there, but such ‘meat’ is highly obscured...too obscured and unnecessarily obscured...reducing a potentially intriguing, existentially provocative piece to a comparatively milquetoasty, breezy little ditty.
The Inter Minorians’ incessant predilection for  prissy, bitchy, manipulative minutiae is initially amusing - but as the clumsiness of  their procedural dysfunction becomes increasingly evident, it's hard  to believe this civilization managed to survive as long as it apparently has (perhaps a touch of Holmes allegory creeping in after all?). If the Inter Minorians spent less time niggling about, perhaps this guy would've better blended his skull cap.... 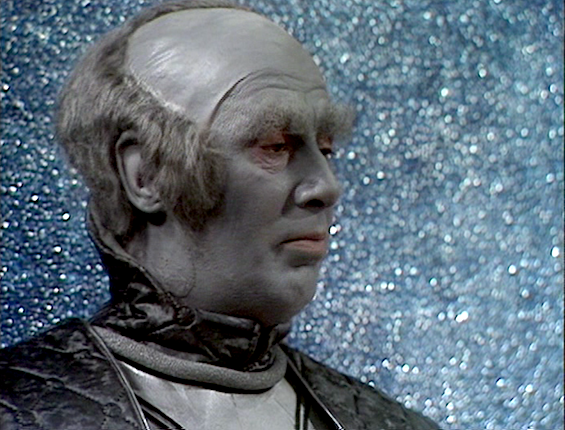 The Doctor’s time tested “Venusian Akido” is here substituted for good, old fashioned boxing.  In a brief but amusing sequence which finds Pertwee (not surprisingly) dispatching an opponent quickly and painfully.  Later, when facing a significantly larger and nastier adversary against whom boxing would clearly be ineffective, the Doctor brandishes his Sonic Screwdriver as a weapon - producing a spectacular napalm effect. 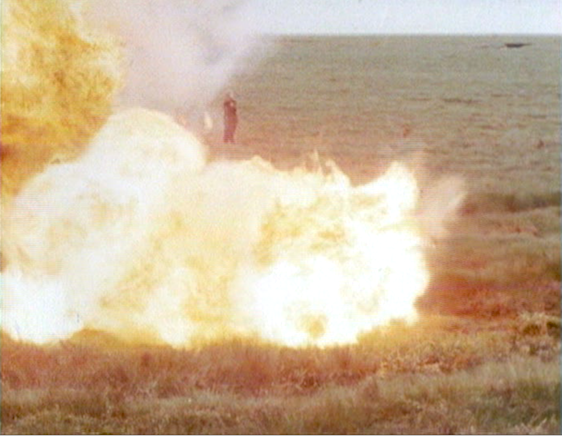 The ‘Screwdriver as a weapon’ conceit is not uncommon in later WHO, but...in my sometimes non sequential journey through the show as a whole...this is the first time I can recall seeing the notion realized so flagrantly and spectacularly.
“Carnival” is more or less a standalone episode in terms of its influence on overall DOCTOR WHO mythology, although it does include several pointed references to past episodes: Daleks are mentioned, as are their Ogron subservients (from “Day of the Daleks” - Pertwee, Story # 60) and the planet Demos (from “The Daemons” - Pertwee, Story # 59).  Intriguing glimpses of a ‘bigger picture’ within a show which exists very much in its own little universe...a tip of the hat also evoking the bottled predicament of many of the characters and creatures populating this tale. 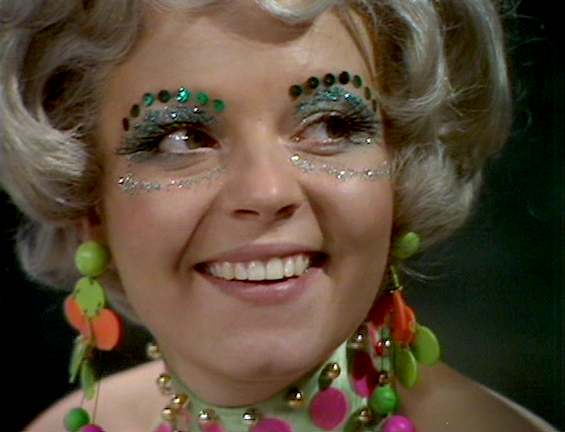 Shirna (Ceheryl Hall) reacts to the ultimate magic trick - the TARDIS' dematerialization - in this final shot from "Carnival of Monsters."  My favorite closing shot of a 'classic' DOCTOR WHO thus far.
The newly restored "Carnival of Monsters" two DVD set is now available HERE in the U.S. and HERE in the U.K.
Extras include...
Episode Two - Early Edit
The running time of this cut is 29:45, the actual transmitted running time is 24:18.
Behind the Scenes (1:45)
Amazing BTS footage of action in both the stage and “the gallery” (the control room from which many early WHO eps were orchestrated) and directed show crew in action with producer/director Barry Letts at the helm.
Visual Effects Models  (8:43)
A reel of various effects shots from the story, some of which look like they were probably camera tests (or scantly used footage at best).
“Five Faces of DOCTOR WHO”  Trailer  (4:11)
A trailer promoting a BBC Two DOCTOR WHO retrospective, which included “Logopolis” (T. Baker, Story #115), “Carnival of Monsters,”  “The Krotons” (Troughton, Story # 47), “An Unearthly Child” (Hartnell, Story #1), “The Three Doctors” (Pertwee, Story #65).
Director’s Amended Ending (1:19)
The story concludes with Vorg (Leslie Dwyer) ensnaring Pletrac (Peter Halliday) in a wager over a shell game.  The transmitted version runs a bit longer than this particular cut of the scene.  While a tad more open-ended than the transmitted version, Letts’ cut is certainly snappier and (perhaps more amusingly) conveys the spirit of these final moments.
CSO Demo  (3:09)
A fantastically intriguing demonstration reel featuring Letts’ early experimentation with Color Separation Overlay (CSO) - think an early form of television blue screen or Chroma Key.  In the piece, a staggeringly visionary Letts proposes embiggening the scale of DOCTOR WHO by inserting actors (shot against a blue screen) into model environments which would allow the team to photograph a far broader array of (photographically larger) angles more or less on-the-fly, as opposed to remaining constrained by “flats” which limited angles due to their lack of flexibility and dimension. 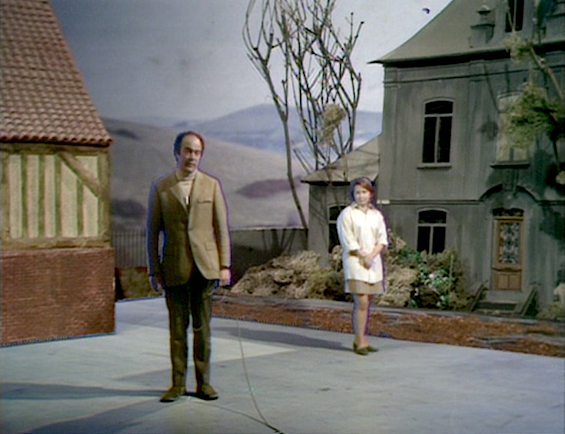 
DOCBACK CODE OF CONDUCT
1) a Docback should be about completely open and free discourse regarding all things WHO with, obviously, some variation on subject matter from time to time - the real world intervenes, discussions of other shows are inevitable, etc.)...  2) matters of SPOILAGE should be handled with thoughtful consideration and sensitivity.  Posts containing SPOILERS should clearly state that a SPOILER exists in its topic/headline and should never state the spoiler itself . "** SPOILER ** Regarding Rory" is OK, for example.  "** SPOILER ** Battle of Zarathustra" is fine as well.  " **SPOILER** Why did everyone die?"  Is NOT good.
And, above all...  3) converse, agree, disagree, and question as much as you want - but the freedom to do so is NOT a license to be rude, crass, disrespectful, or uncivilized in any way.  Not remaining courteous and civil, as well as TROLLING or undertaking sensational efforts to ignite controversy, will result in banning.  Lack of courtesy may receive one (1) warning before a ban is instigated.  Obvious Trolling or Spamming will result in summary banning with no warning.  One word posts intended to bump-up any Docback's figures on AICN's "Top Talkbacks" sidebar will be considered actionable Spam - they not only complicate efforts to access Docback from mobile devices, but impede readers' abilities to follow or engage in flowing conversation.
In short, it's easy.  Be excellent to each other.  Now party on...
Follow glenoliveraicn
Readers Talkback
comments powered by Disqus
Top Talkbacks
Trending