NOW WITH MORE DALEK!! The Friday Docback Gets Served By 'The Robots of Death'!! DOCTOR WHO Story #90, More!!

Merrick again...
This image via Steven Moffat's Twitter stream.  My understanding is this is from Season/Series 7's first episode... 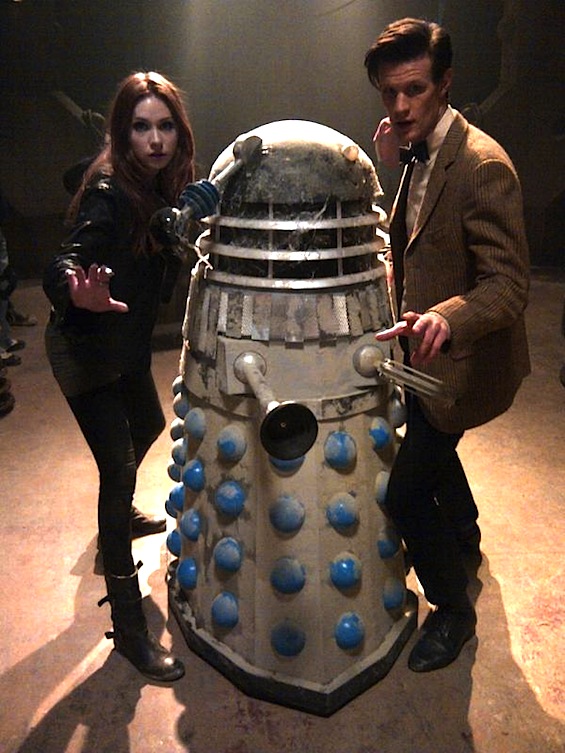 Also, DOCTOR WHO News notes a few interesting Twitter exchanges regarding yesterday's filming of this episode. Seems the CONFIDENTIAL gang is on-set and filming, despite that show having not been renewed (details HERE).  Might this be for DVD/Blu-ray extras, or  for an online version of CONFIDENTIAL which was recently reported by The Daily Star? For neither?  Or both?
PERSONALLY, I've always contended that...while CONFIDENTIAL itself may not come back...some form of perpetual "Making of..." would be generated for S7 and beyond, as the notion now a part of the WHOscape.  Sounds like this is what's happening, to some degree at least.
More as we know more...
[[[ ORIIGINAL ARTICLE FOLLOWS ]]]
---------------------------------------------------------
Merrick here...
...with a look at “The Robots of Death,” a four part Tom Baker-era DOCTOR WHO story initially transmitted January - February 1977.
“Robots” marks companion Leela’s first adventure away from her homeworld (she was introduced in “The Face of Evil,” the previous story in DW TV continuity), and is most certainly one of the higher-echelon “classic” WHO serials.
But first...
THE FINAL RECIPIENT OF THE DOCTOR WHO DVD PRIZE PACK FROM BBC HOME ENTERTAINMENT IS...
Over the past few weeks, we’ve offered prize packs of awesome DOCTOR WHO DVDs to a few lucky recipients.  Last Friday, we launched a giveaway for our last set, which included issuances of newly restored titles “The Tomb of the Cybermen,” “The Robots of Death,” “The Face of Evil,” and “The Three Doctors.”
The name of the game was to e-mail me at, or closest to, a pre-selected mystery time.  In this instance, my pre-selected mystery time was Saturday, March 24, at 1:05 pm CST USA.  The reader whose message arrived closest to said time is:
Ron A, WI
...whose message arrived  at 1:08 PM CST USA.  Thanks so much to all who participated, and stay tuned for further giveaways!  Ron your contact information has already been passed along to the folks at BBC Home Entertainment, who are kindly and graciously handling fulfillment in these giveaways.  A sincere tip of the hat to BBC Home Entertainment their dedication and hard work when making opportunities like these happen .
IN CASE YOU MISSED THE NEW AND FIRST SEASON  / SERIES 7 TRAILER...
Last weekend, the first official DOCTOR WHO convention happened in Cardiff.
Several interesting infobits came out of said convention, including news that Amy and Rory will exit DOCTOR WHO in an episode set and shot in New York City and featuring Weeping Angels.  The first promo reel for Season/Series 7 was also revealed at the convention, and was released online a few days later.  If you didn’t catch it at the time, here it is once more for your esteemed consideration.
"The Robots of Death" 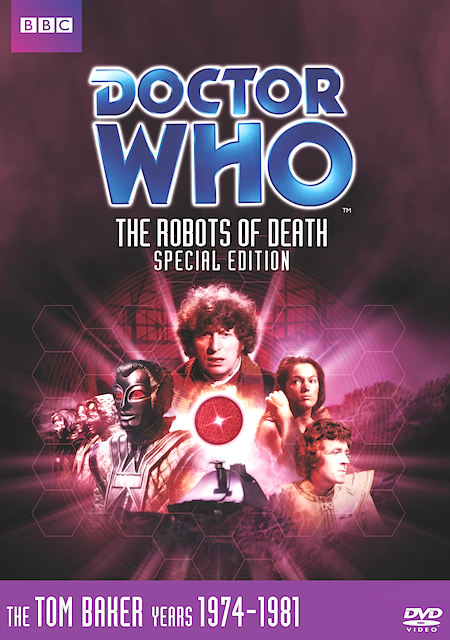 “To the rational mind, nothing is inexplicable.  Only unexplained.”
- the Doctor, “The Robots of Death,” Episode 1
“The Robots of Death” opens with introductory exposition amongst the denizens and crew a “Sandminer” - a gargantuan, mobile machine exploiting the resources of an unnamed world in a search for precious minerals (not dissimilar to the Spice Harvesters of DUNE).
The personnel debate the reliability of their sophisticated Voc-class robots.  These Voc, used as support crew and servants on the Sandminer, are evidently imbued with “over a million multi-level constrainers” designed to dissuade the robots from ever harming a human being.  None the less, “they go wrong.”    Evidence initially overlooked when Sandminer crew members turn up dead, leading humans to suspect fellow humans...and the recently arrived Doctor (Tom Baker) and Leela (Louise Jameson). 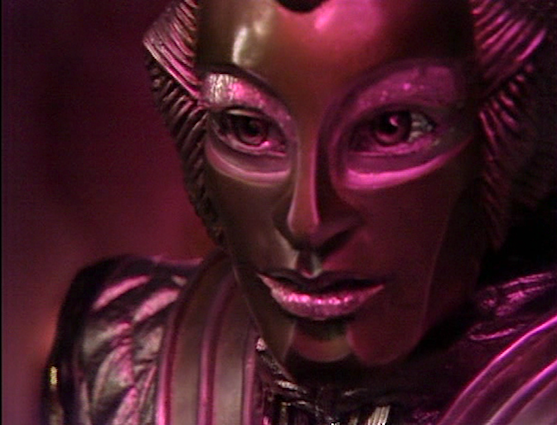 Whoever decided that setting (what amounts to) an Agatha Christie murder mystery on the equivalent of a Spice Harvester from DUNE...while mixing Asimov’s Laws of Robotics into the equation...must’ve been more than a tad touched.  At face value, the very notion feels mad - perhaps even unworkably anachronistic. The end result, however, reveals one of the most skillfully executed and brilliantly conceived DOCTOR WHOs I’ve come across up to this point in my journey through the show.  With its brazen and unapologetic amalgam of conceits, “Robots” feels comfortably familiar but also necessarily unique and vital.
Cinematically directed by Michael E. Briant and tightly scripted by Chris Boucher (“The Face of Evil”), “Robots” advances a level of detail not often seen in early WHO - or on television in general, for that matter.  The world here is functional and busy, akin to an early Ridley Scott or Steven Spileberg movie.  Richly designed art deco sets sport large view screens conveying active readout schematics as bridge crews talk over each other while fulfilling their duties.  Several layers of on-screen action often unfold concurrently.  The crew persons of the Sandminer are adorned by, and surrounded with, gaudy opulence which is at once comical yet utterly compelling... 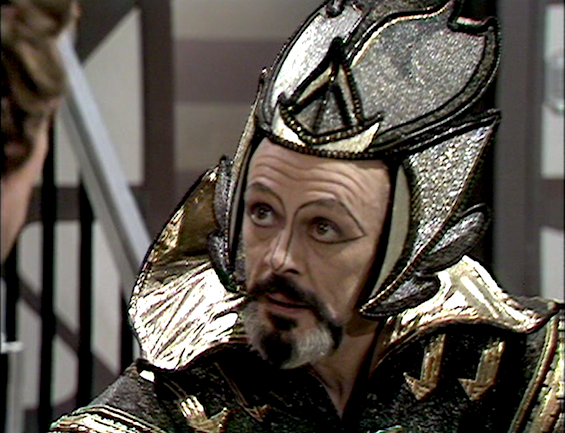 The presence of proper, pseudo-prissy robots akin to C-3P0 pre-dates the arrival of the first-ever STAR WARS film by by months (ah, parallel development!), and admirable attention to subtlety escalates the tale’s overall credibility considerably (the throat of a strangling survivor is horribly bruised throughout the rest of the episodes).  In TV terms, stories like this are often referred to as “bottle shoes” - a show that never escapes one primary location.  Such terms can certainly be applied here, but “Robots” is far more than just a bottle show - it’s a fully conceived mini-verse.  A “bottle verse,” if you will. 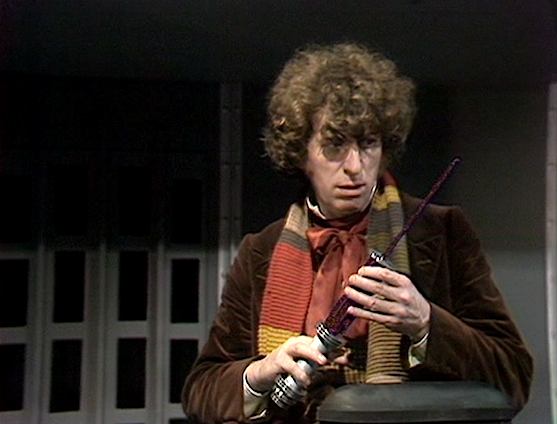 The crimson components of this Laserson pobe (‘Laserson’ being a brand name, if you pay close attention to the art direction) is a constantly swarming collection of energy - an example of the nuance and detail spread throughout the execution of this story.
In her first outing with the Doctor, Louise Jameson’s ‘Leela’ proves herself a formidable, cunning, and highly adaptable companion.  As implied by her introduction in the preceding story, she’s much more than a mere ‘primitive’ girl, and displays an engaging tendency to fully grasp the complexity of a situation while also distilling to its simplest, most base terms.
Brian Croucher beings hypnotic, “I’m gonna fuck you UP!” intensity to his Borg character (Borg is the name of his character in DOCTOR WHO, as opposed to one of the Cybermen from STAR TREK: THE NEXT GENERATION).  Russell Hunter seems to be having fun moving his Uvanov character between utterly out-matched and greedily obsessed, and David Bailie’s Taren Capel...with striking features, a booming voice, and psychotic face painting...evokes some of the very best superhero villains around. 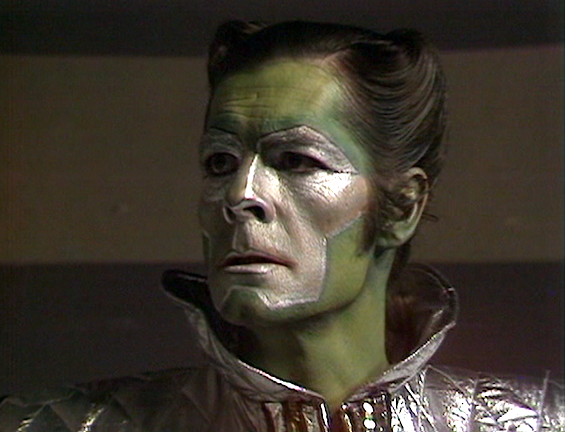 As stated above, “The Robots of Death: is, essentially, a mystery - albeit a not-particularly-robust one when distilled to its core essence. This said, scripter Boucher wisely infuses the proceedings with tantalizing subtext exploring about how societies inadvertently set limitations for themselves based on how they relate to their technologies.  He seems to be positing that a people’s reliance on tech might also deaden them to their world and surroundings in ways we may not often consider. For example, he robo-dependent people of the Sandminer seem to have a diminished sense of self-reliance, and...more dangerously...a decided lack of vision about what is possible (the words “not possible” are evoked on multiple occasions as trouble shooting is underway).  The Doctor, at one point, suggests that stripping robot servitude away from the crew’s civilization could result in that civilization’s downfall.  To some extent, at least, Boucher seems to be professing that their continued, blind reliance on technology might well result in a different flavor of downfall - the los of our ability to compensate and adapt.    An interesting observation, and one which remains profoundly relevant in today’s Net-connected, computer-assisted, startlingly precarious world.
The recently restored “Robots of Death” is now available on DVD HERE in the U.S. and HERE in the U.K.
Extras Include...
“The Sandmine Murders”   (32:24)
Insight from...
-- Brian Croucher (Borg)
-- Michael E. Briant   (Director)
-- Philip Hinchcliffe    (Producer)
-- Tom Baker (Doctor #4)
-- David Collings (Poul)
-- Louise Jameson (Leela)
-- Pamela Salem (Toos)
-- Elizabeth Waller (Costume Designer)
Discusses...
-- Design and conceptual inspirations for the Sandminer...
-- Chiparus art deco serving an inspiration here...
-- Back of robots heads inspired by a Wella Hairdresser logo...
-- Robots' attire made of padded, quilted shower curtain...
“Robophobia” (11:48)
Toby Hadoke (occasionally in drag) guides us through the history of Robotics.  Sometimes “real world” but mostly WHOvian.
“Studio Sound” (1:27)
Featuring a clip of Robot SV-7 conversing with the Doctor and Leela before SV-7’s robovoice was added in.
“Model Shots” (8:00)
Featuring mute model tests (the Sandminer), a majority of which did not make it to screen.
“Studio Floor Plan”
An (apparently actual?) floor plan of the “Robots of Death” stages.  The general stage overview, encompassing different sets for the story, allows users to embiggen the layout of specific sets using their DVD remote.  THIS is the kind of thing which oughta be released as part of an App.
“Continuity” (:53)
Essentially a BBC One bumper for “The Robots of Death.”
“Photo Gallery” (5:37)
“PDF Materials”
Radio Times Listings
“Coming Soon”
Trailer for “The Face of Evil” (T. Baker,  Story # 89)
IN THE COMING WEEKS (sequentially)
"The Daemons" (Pertwee, Story #59)
"The Carnival of Monsters" (Pertwee, Story #66)


DOCBACK CODE OF CONDUCT
1) a Docback should be about completely open and free discourse regarding all things WHO with, obviously, some variation on subject matter from time to time - the real world intervenes, discussions of other shows are inevitable, etc.)...  2) matters of SPOILAGE should be handled with thoughtful consideration and sensitivity.  Posts containing SPOILERS should clearly state that a SPOILER exists in its topic/headline and should never state the spoiler itself . "** SPOILER ** Regarding Rory" is OK, for example.  "** SPOILER ** Battle of Zarathustra" is fine as well.  " **SPOILER** Why did everyone die?"  Is NOT good.
And, above all...  3) converse, agree, disagree, and question as much as you want - but the freedom to do so is NOT a license to be rude, crass, disrespectful, or uncivilized in any way.  Not remaining courteous and civil, as well as TROLLING or undertaking sensational efforts to ignite controversy, will result in banning.  Lack of courtesy may receive one (1) warning before a ban is instigated.  Obvious Trolling or Spamming will result in summary banning with no warning.  One word posts intended to bump-up any Docback's figures on AICN's "Top Talkbacks" sidebar will be considered actionable Spam - they not only complicate efforts to access Docback from mobile devices, but impede readers' abilities to follow or engage in flowing conversation.
In short, it's easy.  Be excellent to each other.  Now party on...
Follow glenoliveraicn
Readers Talkback
comments powered by Disqus
Top Talkbacks
Trending