Merrick here...
...with a look at “Galaxy 4,” a four part Hartnell-era DOCTOR WHO story which first transmitted September - October 1965.
It is here that we must contextualize what, exactly, “Galaxy 4” is.  Rather, what it has become.  As previously mentioned, a long time ago BBC set about erasing and/or destroying a number of vintage DOCTOR WHO episodes.  This practice was ceased, but only after a fair amount of damage had been done to recordings of the show’s early years.  Some of these trashed episodes have subsequently been recovered from various sources, a few have been only partially retrieved, etc.  Some have a reasonably quantity of visual information still associated with them (whether this be promotional images, “telesnap” photos, etc.), allowing for some level of “reconstruction” using still-in-existence audio tracks.  Others have less visual material to remember them by , making it far more difficult for us to get a sense of what these stories might’ve been like in terms of design and visual presentation.
At the moment, “Galaxy 4” is an episode for which precious little imagery of any kind exists.  Its original audio tracks have been wrapped up in narration and presented on THIS CD set, and THIS reconstruction from Loose Cannon attempts to make the best out of a poor situation.  This equation will eventually change at least somewhat with the release of ‘Airlock,’ episode 3 of this story, which was recovered late last year along with an installment of the Troughton-era “Underwater Menace.”
The discovery of this particular “Galaxy 4” episode is gloriously coincident, as it happens to contain one of the story’s most effective sequences, and and one of the greatest DOCTOR WHO moments up to this point in its run.  It’ll be be amazing to view this moment on-screen.
“GALAXY 4” 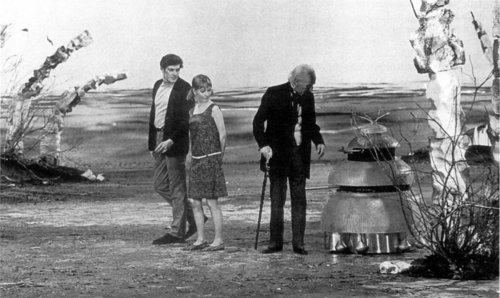 image via dailypop
The Doctor (William Hartnell) and companions Steven (Peter Purves) and Vicki (Maureen O’Brien) materialize on an unnamed world, where two non-indigenous and disparate species are locked in distrust and combat - both careening towards the same inexorable fate. These Drahvin and Rill both believe the world they’re on will explode in fourteen “dawns.”  Frustrated by the irreparable status of their own vessel, the bitchy-but -hot Dravhin war women plot to steal the Rill ship and escape this dying world before it’s too late.  Unaware of these Drahvin maneuverings, the Rill hustle to restore their own damaged craft until the Doctor makes a game changing discovery:  the planet does not have fourteen days of life left.  It only has two...
Acknowledging the caveat that it’s hard to be completely fair to an episode which can not be seen in the way it was intended, it’s still possible to get a very strong sense of story movements, character developments, etc. through the above linked audios and reconstructions.  And through them, “Galaxy 4” emerges as a wonderful pastiche of well-considered concepts which never quite congeal into a propulsive or compelling endgame. In short, and to use an unfortunate but inescapable colloquialism, the “whole” of “Galaxy 4” never equals the sum of its parts.
One of the issues here is that the backstory of “Galaxy 4” is considerably more interesting than what actually happens once the Doctor and Co. enter the tale.  I won’t go into too many details because it’s fun to discover these particular bits as you go, but suffice to say that the “reality” we’re introduced to as the story opens emerges as something different once we’re told exactly how the Rills and Drahvin became locked in their fateful standoff/smackdown.  This imbalance is accentuated by the introduction of compelling thematics which never seem to develop past lip service.  For example, Drahvin overboss Maaga bullies about clone lackeys in a demeaning social/power structure not dissimilar to themes  addressed in Ridley Scott’s BLADE RUNNER seventeen years later. 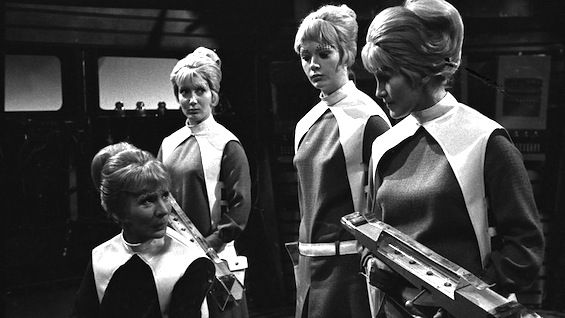 image via wonderingsinthefourthdimension
The Rill’s reticence to be seen due to the effects their appearance might have on outsiders pre-dates the Medussans in STAR TREK: THE ORIGINAL SERIES’ “Is There in Truth No Beauty?” by two or three years.
To be clear, I’m not attempting to imply that these later pieces were directly impacted or inspired by “Galaxy 4” - I’m merely pointing towards interesting and eventually “classic” conceits which are explored herein, and earlier.  Ideas which, unfortunately ultimately spin into nothingness as the story they’re supporting becomes unruly, unfocused, and ultimately mis-paced.
Sustaining the episodes strange, teeter-totter duality is Stephanie Bidmead’s appearance is Maaga.  In many ways she’s comically over the top as a decidedly unlovely Drahvin battle marm.  Perhaps her actual on-screen appearance might suggest a greater subtlety than is evident via recons and audios, but as is she chews scenery with the voraciousness of STAR TREK’s Doomsday Machine.  Bidmead does dial down her performance a bit from time to time, resulting is one of the most chilling and mean-spirited exchanges heard to this point in the show’s chronology.
MAAGA
It may be that we shall kill neither the Rills nor these Earth creatures.  Not with our own hands, that is. It may be better for us to escape in the RIll spaceship and leave them here.  And then, when we are out in space, we can look back.  We will see a vast, white, exploding planet and know that they have died with it.
DRAHVIN #2
But we will not see them die...
MAAGA
You will not, but I at least have enough intelligence to imagine it.  The fear, the horror, the shuddering of a planet in its last moments of life - and then they die.
That’s pretty potent material, and we’ll get to see that for ourselves presuming BBC releases “Galaxy 4” Episode 3 - ‘Airlock’ in some form, as said episode contains this very pontification.
There is greatness in “Galaxy 4” - but William Emms’ script is never refined in a way which accentuates that greatness.  As such, “Galaxy 4” feels a tad like an aborted sculpture.  A mass of compelling notions and promising adventure which are left to slide about and dry out out atop a table, instead of being taken in hand and lovingly formed into a beautiful and immortal statue.
IN THE COMING WEEKS (sequentially)
"The Tomb of the Cybermen" (Troughton, Story #37)
"The Three Doctors" (Pertwee, Story #65)
"The Face of Evil" (T. Baker, Story #89)
"The Robots of Death"  (T. Baker, Story #90)