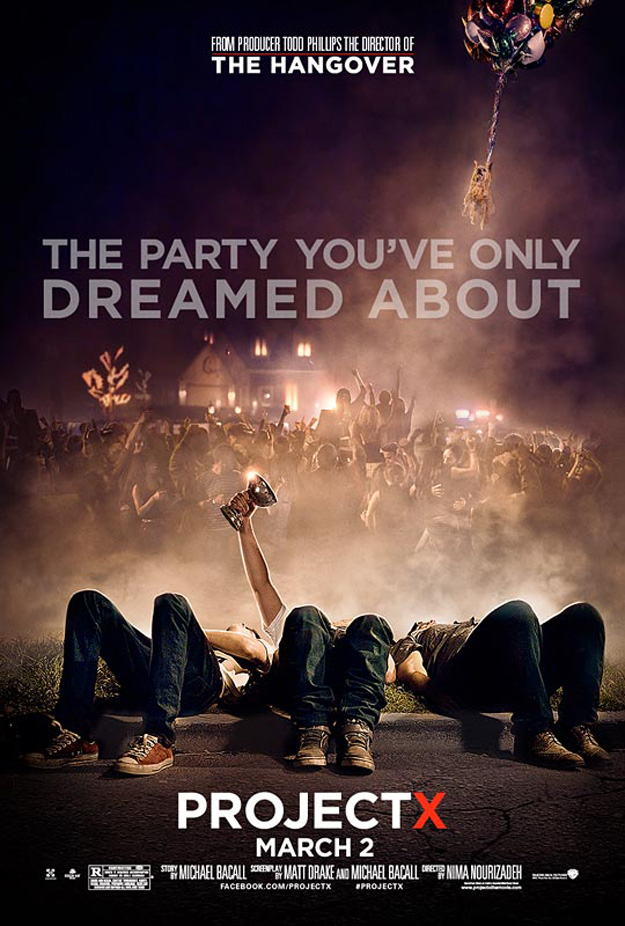 I've seen movies that have offended me, but I never got so righteously indignant over them that I would suggest that they be banned or destroyed.  I've seen THE HUMAN CENTIPEDE 2, and while I'll say it's a terrible movie, in its excess of shock, sex, and gore, it is trying to make a point, even if it's buried in shit.  A movie like FAREWELL UNCLE TOM is abhorrent to me in almost every way, but I will say this about it - it's probably a far more accurate a portrayal of slavery in America than we would care to admit.  Just because the makers of the movie had no idea of the level of racism that their film achieves doesn't make it any less racist, but FAREWELL UNCLE TOM, if I may suggest, probably gets more right about the horrors of slavery than a miniseries like ROOTS does.

What does all this have to do with a supposedly innocuous teen sex comedy like PROJECT X?  I'm certainly not suggesting that it be banned or destroyed, if that's what you're thinking.  It never once rises to anything close to that level.  But, there are moments in the movie that give me pause.  I'm not offended by any of the behavior of the characters - I've seen tons of movies about kids being irresponsible; this ain't my first rodeo.  I'm certainly no prude when it comes to sex on film.  But I'm finding it difficult to resolve my conflicted nature.  The film critic in me was moderately entertained, and laughed quite a bit at the antics of three kids (Thomas Mann, Oliver Cooper, Jonathan Daniel Brown) who are trying to throw a party to get popularity and/or laid, and as the night progresses it becomes obvious that the party becomes something of a physical incarnation of Chaos and Disorder.  The dad in me, though, flinched quite a bit at this movie, and desperately hoped that kids sneaking into this movie (and sneak they would, because the demographic this movie's so obviously aimed at can't technically get into this movie anyway) wouldn't get the idea that this was any kind of respectable behavior.

Believe me, I feel a little stupid thinking that way.  I remember when parents squawked at BEAVIS AND BUTTHEAD when a couple of morons managed to set themselves on fire emulating the TV show.  I thought at the time that it was stupid to get upset at a cartoon - those kids were obviously idiots.  But now, through the distance of years, a movie like PROJECT X, which is a complete fantasy of adolescent mischief gone completely off the deep end, makes me feel in my gut that what I'm seeing is somehow morally wrong.  There's tons of sex and drug use in the movie, with no repercussions at all, except at the very end, and even then it's a slap on the wrist in the larger sense.  And yet... and yet... the same could be said for the debauchery of ANIMAL HOUSE, and it never crosses my mind at all that their behavior is somehow repellent when I watch that movie.  PROJECT X made me very aware of my own personal hypocrisy on that front.

But I cannot deny that PROJECT X is very funny.  The three main characters are very likable, even when the party goes well beyond what they anticipated and takes on a demonic life of its own.  The party itself becomes a character in the film, and while this is yet another "found footage" movie I do like how that genre of filmmaking has gone beyond horror and explored other avenues.  It all still comes down to the same problem, though, which is that when bad things start happening the logical thing for the person wielding the camera to do is to drop it and run.  In most found footage movies I'm always hyperaware of the camera and the person behind it, but because of the way the cameraman is portrayed I forgot about it a lot easier than in a movie like CLOVERFIELD.

The film gets past that conceit by making the movie from all sorts of different sources, phones and cameras, and making the main cameraman character (played by Dax Flame) as completely bugfuck nuts, and he gets footage from places when sensible people would have fled.  The camera isn't as shaky as you might think - for one thing, the main cameraman in the movie is played as competent - and director Nima Nourizadeh keeps everything paced remarkably well.  As the party goes off the rails, it feels very organic and each crazy event that happens at the party feels like a solid progression.  The performances are solid as well - Oliver Cooper is especially good as the instigating friend who pushes the party over Thomas Mann's objections - and as found footage movies go this is one of the more successful uses of that mode of storytelling.

But again, I'm conflicted - I've seen enough movies like ANIMAL HOUSE or PORKY'S or other teen comedies that teen misbehavior shouldn't faze me.  But this one did.  PROJECT X may be the first teen comedy I've seen that made me feel old.  This movie isn't aimed at me, of that I'm certain.  And while I can appreciate the humor and the skill of the actors and filmmakers, as I left the movie, I was desperately hoping that the kids on my block never see this movie.  My insurance doesn't cover flamethrowers.