The Friday Docback Spelunks 'The Caves Of Androzani'!! DOCTOR WHO Story #136, And More!!

...with a look at "The Caves of Androzani," Peter Davison's last story as the fifth Doctor, which transmitted in March 1984. 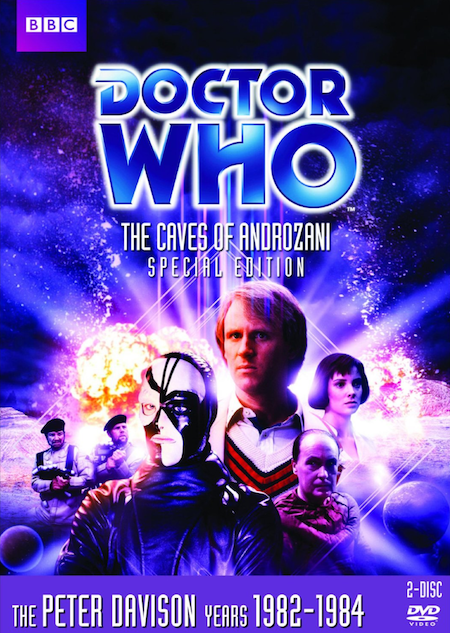 On the desolate world of Androzani Minor, the Doctor (Peter Davison) and companion Peri (Nicola Bryant) are apprehended by forces who mistakenly believe the duo is running guns to an “android rebellion” on the planet.   Said rebellion quickly takes on a different complexion than initially perceived, becoming instrumental in a violent adventure of intrigue and deception which points our heroic Doctor towards a life-altering fate.

When I first set out to explore “classic” DOCTOR WHO episodes, the one installment readers and acquaintances alike implored me to see was this one: “The Caves of Androzani.” I heard these behests, and the tale immediately went to the top of my list.  Knowing that a freshly restored version of the DVD was on the way, I waited...as I wanted to watch this when it was in the best condition available - which it now is. 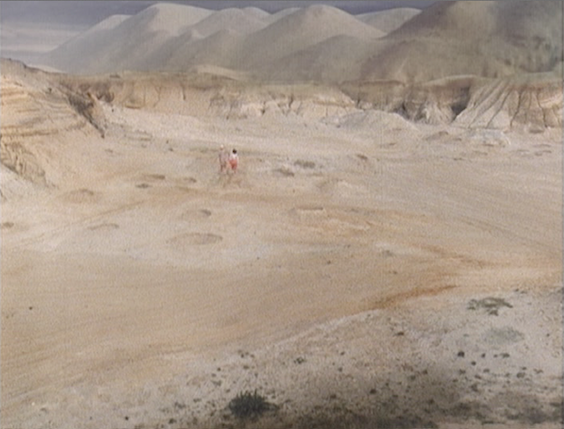 A few nicely realized shots suggest a lovely sense of scale - like this angle of the Doctor and Peri making their way across a wasteland on Androzani Minor.
The extras on this new “Special Edition” DVD  - releasing February 14 (UK?) - proclaim “Androzani” to be one of the best DOCTOR WHO episodes ever made, if not THE best, mirroring the sentiments of those who proclaimed its greatness here on AICN’s message boards.  I can’t comment on whether it’s THE best, as I’ve yet to see every single story.  I will say, however, that “The Caves of Andorzani” may well be the best DOCTOR WHO I’ve personally seen to date, perhaps only eclipsed by “The Talons of Weng-Chiang” or “The Sun Makers” - I’d have to watch them all again to be sure. Whatever the case, “Androzani” represents consummate WHO  - and is easily among the finest the “vintage” iteration of the show has to offer.
Directed with energy, intensity, and flare  by Graeme Harper, the script by Robert Holmes (tellingly, he also scripted “The Talons of Weng-Chiang” and “The Sun Makers”) leaves little sag - it’s high on suspense, quick in execution, accessible at its core, yet sophisticated in its detail.  It’s a hugely entertaining story, with little or none of DW’s frequent shortcomings weighing it down or holding it back.  In the end of this episode, Peter Davison exits the show, regenerating into successor Colin Baker.  The events leading to Davison’s regeneration are handled masterfully here - a seemingly small and insignificant moment  - that we think nothing of and forget about entirely once it transpires -  sets Davison’s incarnation of the Doctor on the road to ruin.  And it’s not a beautiful exit.  The Doctor takes a beating here, both physically and emotionally.  His downfall feels like a Christ parable - in a “family friendly” way he’s essentially broken, scourged, and sacrificed for a greater good...only to be reborn.  He selflessly sacrifices everything, without hesitation, to save the most meaningful thing in his universe at that moment...his companion Peri. 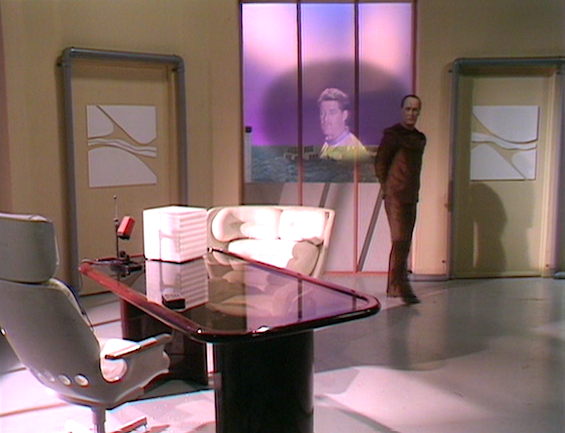 A simple but effective VFX in which Morgus (John Normington) engages in a holographic call with General Chellak (Martin Cochrane).  Clever blocking and angle selection made Normington appear to move AROUND Chellak's suspend image as he paced the room.
Cheesy asides to the camera by Trau Morgus (John Normington) evoke Mike Meyers’ Doctor Evil, which initially come from out of nowhere and threaten to undercut these earnest proceedings with their decidedly over-the-top nature.  Fortunately, these gags are unexpected enough and unique enough...and the story and performances wrapped around them are strong enough and consistent enough...to overshadow this peculiarity, whose origins the DVD’s extras discusses on several occasions.  Seems Normington misunderstood one of Harper’s directions, and instead of verbalizing his stream-of-consicousness observation towards the general direction of the camera, actually turned and spoke his line directly into the camera -  i.e. addressing the audience.  There was no time or money for reshooting this misfire, so Harper instead adapted the mistake as a stylistic conceit which reappears in the story.
This kind of “thinking on one’s feet” and clarity of potential on behalf of director Harper is, without a doubt., one of the chief reasons “Caves of Androzani” succeeds on so many levels.  In one interview (see below for its placement on the DVD’s extras), Harper discusses his strong and instinctual preference for directing DOCTOR WHO “from the floor” - for being on-set and engaging with actors and sundry minutiae, instead of directing remotely (thus more clinically) from studio’s “The Gallery” control room - which was the structure and tradition on vintage DW.  This direct, hands-on involvement allowed his ideas and energy to more fully penetrate the creative process as the story was being realized (a truth reflected by several key players in interviews included on  this set), and it shows.  The sense I get from the DVD’s extras...and my sincere preemptive apologies if this is a slight to anyone involved with the making of this story...is that Harper’s manner and drive very much raised the game of those around him, resulting in a story which clearly reflects increased attentiveness and creative versatility across the board.  In this episode, my greatest gripes is that the design of the giant man-bat creature which gobbles hapless man burgers in caves might seem a touch inadequate given the raised level of production value around it, and the elevator door in Trau Morgus’ office may well be the slowest opening door in the history of film or television -- rivaled only by ENCOM’s “Now THAT is a big door!” door in the first TRON movie.

(l) Morgus' merc henchman Stotz (Maurice Roëves),  (r) Snake from METAL GEAR SOLID.
There’s a little something for everyone in “The Caves of Androzani.”  It has spaceships, android terminators, inventive scene blocking and photography, stylish edits,  Michael Bay-esque explosions, machine gunning mercenaries, political intrigue, corporate corruption, assassinations and cover-ups, a floppy bat-like cave monster,  an angry masked villain who may or may not be such a prick after all, unexpected cameos by past personages of the Fifth Doctorverse (including Adric), and Nicola Bryant's wondrous legs and boobies.
I’m disheartened to sense that “The Twin Dilemma” - this episode’s follow-up and Colin Baker’s first full stint as the Doctor - is apparently one of the worst stories created for any Doctor in any iteration of the show.  Seems a travesty that a “high” such as “Androzani” should be followed by what I’m told is such an excruciating “low.”  But that’s the nature of television I suppose, and such is the way of life as well.
All the same, “Andorzani” remains one of WHOstory’s most remarkable accomplishments,  and is unlikely to be regarded differently anytime in the future.  ’Tis a true classic at the very least.    A few more thoughts highlighted in blue below...
“The Caves of Androzani” Special Edition releases February 14th here in the U.S, and his available for pre-ordered HERE.
Extras include...
BTS The Regeneration (7:54)
Perspective of the Doctor's regeneration from Davison into Colin Baker
.  Available with studio sound, or insight via commentary from Davison (who explains that he found the inspiration for the sequence in The Beatle's Sgt. Pepper).  Nicola Bryant and Colin Baker discuss the sequence as well.  .
Creating Sharaz Jek (5:05)
Insight from Christopher Gable (Jek) regarding  the inspiration and application of the mask  he wore in this story.  "On Doctor Who, there isn't anything like enough time ever to do anything. And time is money, and there isn't a lot money, either." 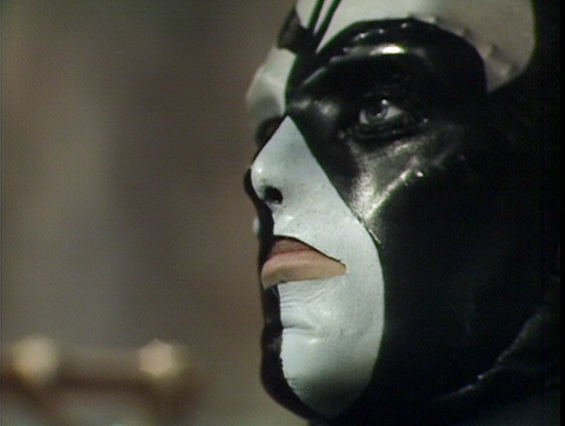 -- Gable's performance is fantastic here.  He evokes Holmes' Magnus Greel in that he's operatic  in nature, but infinitely more sympthetic and tragic.  Gable does an amazing job conveying emotion through a mask which covers a majority of his face - voice inflection and body language mean a lot here.  --
Extended Scenes (4:10)
News (5:22)
TV reports of Davison's departure from the show, including vintage  interviews with Davison and Producer John Nathan Turner (who addresses press reports that a "lady" Doctor was  being sought).
-- Interesting how of this discussion of a lady Doctor seems to resurface.  Nathan-Turner replied that he was seeking a Doctor older than Davison at the time, evidently more along the lines of first Doctor William Hartnell.  He said that IF they cast a woman Doctor, it would be someone middle aged and cranky.  I wonder how they shifted from this thought process to Colin Baker?  Of  course, Team Moff was looking for an older  Doctor until they were blown away by Matt Smith, so... --
Chain Reaction (36:03) -- Matthew Sweet, presenter   -- (Chain Reaction was this story's original title) --
Insight from...
-- Eric Saward (Script Editor)
-- Director Graeme Harper
-- Peter Davison
-- John Hurst (Production Designer)
-- Martin Cochrane (General Chellak)
--  Nicola Bryant (Peri)
-- Original talk/hopes were to offer the part of Salateen to The Who's Roger Daltry, cast Tim Curry as Sharaz Jek, and plug  Ian Holm or Ronald Lacey into the Trau Morgus role.  --
-- Robert Glenister (Major Salateen)
-- Discusses the accidental development of Trau Morgus' asides to the camera
-- Discusses the casting of Christopher Gable as Sharaz Jek
-- Composer Roger Limb
-- Davison talks about the emotion of transitioning to a new Doctor, discusses acting his heart out during his final moments as the Doctor, but being upstaged by Bryant's cleavage.
Directing Who: Then & Now (11:42)
Director Graeme Harper compares directing DW back in the 80s and now (he directed a number  of vintage WHOs, as well as Russell T. Davies era episodes like "Rise of the Cybermen," "The Age of Steel," "The Waters of Mars," "Turn Left," and more).   Harper reveals that the episode's legendary Regeneration sequence actually represents only "70 percent"  or so of what he had in mind.
-- This is a very interesting look into how DW was/is made.  Highly recommended.  --
Russell Harty (8:37)
A simultaneous appearance of a tired looking Peter Davison and and equally fatigued Colin Baker on Harty's talk show. The pair address (recently aborted) plans to change the TARDIS into a pay phone booth, and face off against an uninvited Cyberman. 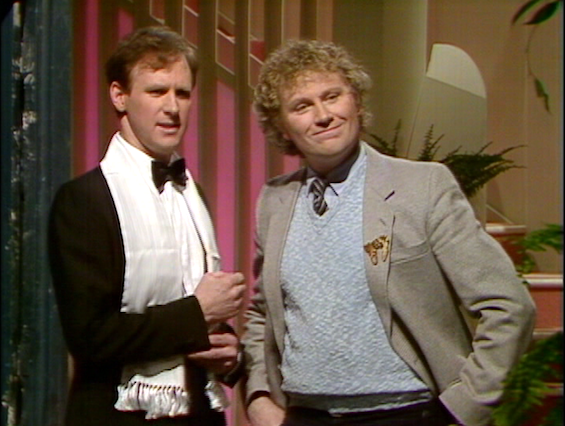 -- This appearance is painfully, almost comically, awkward and probably did neither DOCTOR WHO or the actors any favors --
Photo gallery (4:56)