The Friday Docback Visits 'The Space Museum'!! DOCTOR WHO Story #15, And More!!

...with a look at "The Space Museum," a four part William Hartnell story which aired between April and May in 1965.   It's directed by Mervyn Pinfield, who also helmed "The Sensorites" in the Hartnell era.  His work here is considerably more agreeable.

AN INTERESTING ARTICLE ABOUT DOCTOR WHO FANDOM

I've been doing what I do for a very long time, and have personally experienced some rather horrendous fan behavior in the past.  People have decided  not to be my friend, or start hate mail campaigns against me, simply because I didn't share their opinions about a show that was important to them (or because I changed my mind).  I once received death threats from readers who simply couldn't accept the truth of news I was reporting about a show they were deeply connected to emotionally...news they simply didn't possess the honesty or clarity to truly comprehend.

To be clear, I'm not referring to DOCTOR WHO fans by saying this, although I have encountered a few hyper-aggressive, unhealthily militant WHOvians over the past year or so (none of the Docback regulars) - so I have at least some sense of where this piece is coming from.

Presented for your consideration, and hopefully discussion below, is THIS article from DenOfGeek.

--  "Invasion of the Dinosaurs"

-- We both loathe James Cameron's TITANIC

-- The joys and perils of Taco Cabana

-- When barbecue eats your pants

-- A brief discussion of SHERLOCK Series/Season 2 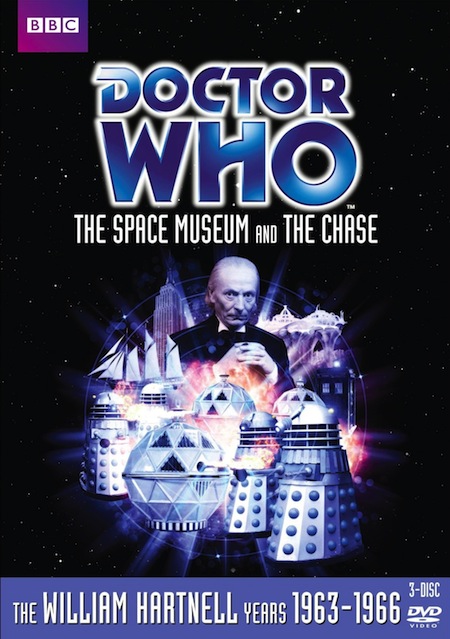 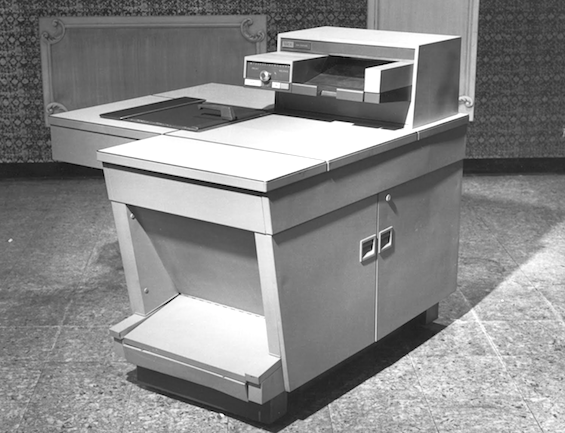 ...after having experienced some sort of time hiccup.  Our heroes quickly move on  to explore a nearby “museum” - where they quickly learn they can be neither seen nor heard by that facility’s personnel.  A mystery which deepens when they stumble across themselves (literally), frozen forever, standing side-by-side in a museum display. 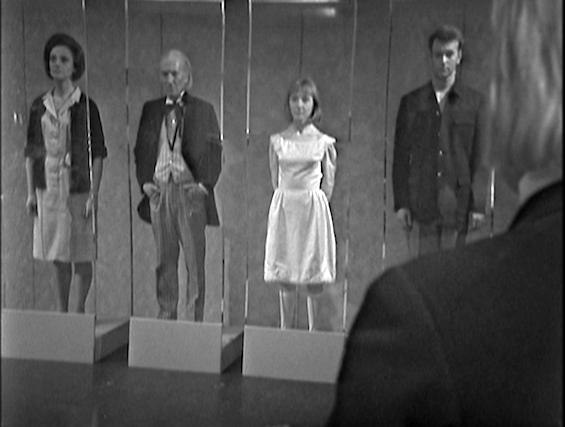 “The Space Museum” is a fascinating contradiction.  Arguably the SEINFELD of the WHOverse, it skillfully (or luckily?) manages to be about many things, while seeming to be about very little at face value.

Superficially, TSM appears to be a celebration / condemnation of the innate inefficiency of living things.  The Doctor and his companions spend a better part of an episode wandering the halls of the museum, unsure about where they’re going and what they’ll find when they get where ever they‘re going.  Much like the SEINFELD episode in which Jerry and his friends wander an airport parking garage.
Governor Lobos (not Sheriff Lobo)...
...and his band of elite Morok (not Morlock).... 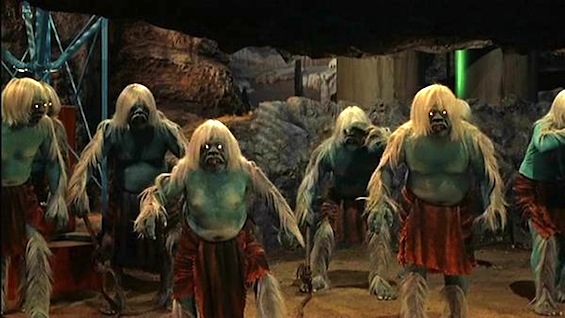 ... operatives, guardians and officials of a once great empire, appear unable to apprehend our unwelcome or and meandering heroes, despite being specifically charged with protecting the museum (which is said to be a monument to their Empire’s past glories  - although it’s suspiciously, and humorously, devoid of displays).
Lobos and Co. appear equally inept  when dealing with (or not dealing with) a rebellion on Xeros - i.e. the world’s native inhabitants (a buncha darkly dressed lanky teens in tennis shoes), whov’e grown tired of the Morok.  I’m not sure  exactly why these Xeron kids are so annoyed with the Morok - as the Morok don’t ever appear to actually do anything, so I fail to see the impedance to co-existence.  But, whatever... 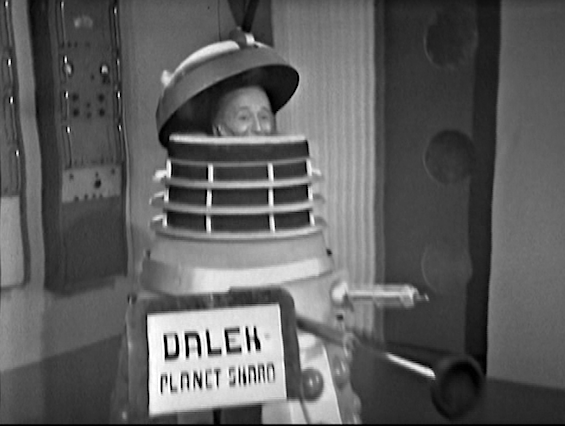 Said rebellion is also a bit rubbish in itself.  They’ve apparently been flirting with upheaval for quite some time, but have been unable to figure out how to mount an actual, effective rising against their opponents.  Instead, they sneak around the corridors of the museum like a buncha middle schoolers trolling a neighborhood late at night, when they should probably be at home in bed.
‘Tis clumsy, bewildering, bizarre madness.  Or, is it?
When you dig towards its core, and pry beneath its surface oddness, one discovers that scripter Glyn Jones’ story is actually about one fundamental and poignant concept - the power to change one’s fate by being proactive and decisive.  The complexion of the youth rebellion against the Morok shifts dramatically once the younguns are properly galvanized into action - once they cease their listless meandering.  The reciprocal effect of this also changes the destines of our heroic travelers - who themselves helped to light a fire under the kid’s asses.  And, in a twisted way, even the outcome of the ill fated Morok is shaped by their finally assuming an aggressive stance against the rebellion .  In the end, “The Space Museum” seems to both affectionately embrace human kind’s sometimes lackluster and indecisive nature, while also ramming a skewer right through the heart of those very same qualities.  When viewed like this, “The Space Museum” ceases to be about “nothing,” and suddenly becomes a pointed manifesto for life.   Do something.  Do anything. Just...DO.
There’s a strong simplicity running throughout this story (which actually calls energy weapons “ray guns”)... 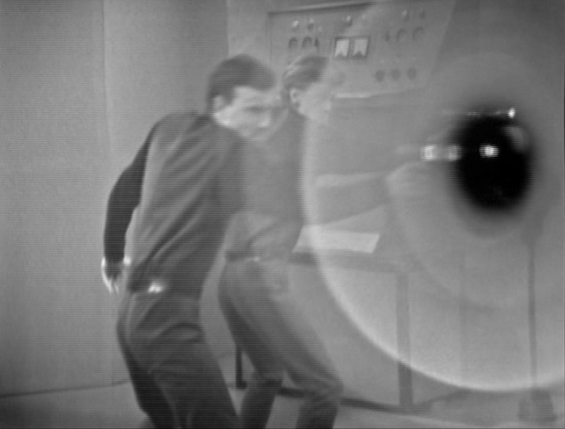 ...masking its loftier ideals and ambitions.  This may be one reason the story doesn’t find greater acceptance amongst fans, simply because it appears narrower and clumsier than it really is.
Challenging fate and forging one’s own destiny is a message which would recur time and time again in DOCTOR WHO over the years.  As is acknowledging the impact of chance encounters with others -  an undercurrent which is also present here.   Indeed, one might argue that these notions eventually became the very heartbeat of the show as a whole.  “Space Museum” wasn’t the first time such sentiments had been echoed in WHO -  I first noted their pointed evocation in the Doctor’s unexpected goodbye to Susan at the end of “The Dalek Invasion of Earth” (Hartnell, Story # 10).
That’s not only a powerful philosophy for a title whose characters and adventures often feel so willy-nilly  and tempest tossed, but beloved and necessary element of the overall WHO dynamic.
That message wasn’t just intended for occupants of the WHOverse, though. It’s meant for all of us, and it’s an easy manifesto to overlook when we’re being assaulted by the pressures and strains of our everyday lives.  Don’t accept the way of things.  Fight for or against what you believe is your fate, because what you perceive to be inevitable may be nothing more than a gateway to a greater and more meaningful adventure.  That’s a lovely and potent notion when one thinks about it.  So let’s get going...
"The Space Museum" is included on a multi-disc DVD set which also features "The Chase."  It's available HERE in the U.S. and HERE in the U.K.