"The Hounds Of Baskerville" And "The Android Invasion" Overrun The Friday Lockback/Docback!! SHERLOCK (Story #5), DOCTOR WHO (Story #83), And More!!

...with a look at "The Android Invasion," a four part Tom Baker DOCTOR WHO adventure which aired November 22 - December 13, 1975.  This week also brings us the second of three new SHERLOCK telefilms - specifically the Mark Gatiss scripted "Hounds of Baskerville."

THIS WEEK ON SHERLOCK: "THE HOUNDS OF BASKERVILLE"!! 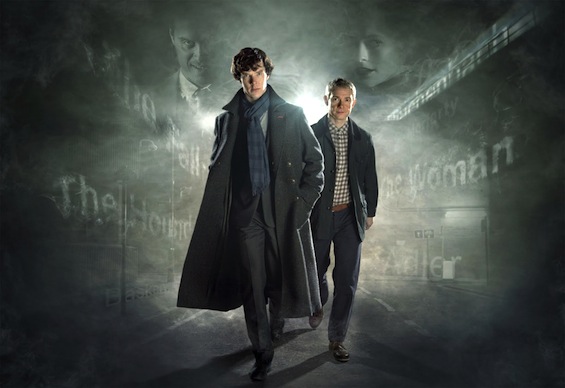 Last Sunday brought us "A Scandal in Belgravia" - the astonishing return of the Steven Moffat and Mark Gatiss television modernization of Arthur Conan Doyle's source material.
Impeccably photographed, immaculately performed, smartly scored, and mesmorizingly scripted - "Scandal" will, without a doubt, emerge as one of television's very highest achievements in 2012.  Which makes the story airing on the first day of the year more than a tad regrettable.
This Sunday brings us the second of three new SHERLOCKs, "The Hounds of Baskerville" - a Gatiss scripted spin on the Doyle title.

Something terrible has happened to Henry Knight; Sherlock and John investigate the truth about the monstrous creature which apparently killed their client's father. A hound from hell? What seems like fantasy in Baker Street is a very different prospect in the ultra-secret army base that looms over Dartmoor.

Directed by Paul McGuigan, who also helmed last week's utterly sublime SHERLOCK offering, "Hounds" transmits at 8:30 PM this Sunday on BBC One.  It has a lot to live up to, following "Scandal" and all, but early word is "Hounds" holds its own rather well.  Fingers crossed...

While we wait, you can find clips of fourth Doctor Tom Baker's appeareance in a previous "Hounds" adaptaion HERE. 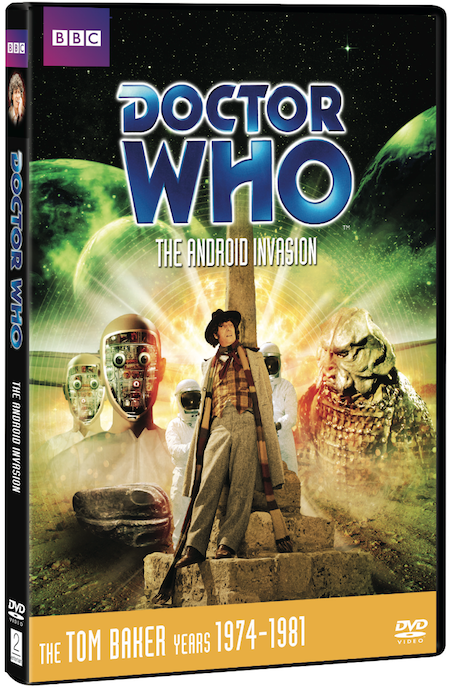 Written by Terry Nation (creator of the Daleks among many other illustrious credits), “The Android Invasion” finds the TARDIS  - “way overdue for a 500 year service" - materializing in the woods near Devesham.  While exploring the area, the Doctor (Tom Baker) and companion Sarah Jane (Elisabeth Sladen) encounter eerie, white clad figures with fingertip guns - and a hapless UNIT operative who apparently plunges to his death.
That same UNIT operative, and those same finger gun jerks, later show up in Devesham - which the Doctor and Sarah Jane quickly learn has been completely and mysteriously abandoned.  Except for the truck load of zombified townsfolk said operative is escorting into place, who mysteriously come to life when the clocks strike 8.  What’s going on with these people?  What secrets does Devesham hide?  And what happens when all is not as it seems?
On the extras for this DVD, producer Philip Hinchcliffe suggests that this story isn’t as popular as it might’ve been due to the presence of some dubiously designed aliens called the Kraal. 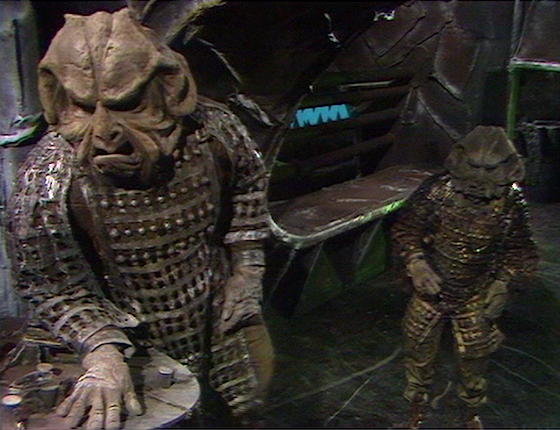 For my money, this isn’t the case at all - I actually found the Kraal less dodgy than a few creatures featured in other more popular stories.  The main reason “The Android Invasion” isn’t discussed more frequently - for my money - is because it is wholly unremarkable.  This sounds like a slight, but I genuinely do not mean it in a pejorative sense.  Let me explain...
Swiftly directed by former WHO producer Barry Letts, the story features a script from Terry Nation which is almost completely devoid of the lag and sag which characterized some of his earlier WHO works.  Proceedings here are brisk, tight, and performances range from solidly enjoyable to somewhat interesting across the board.  The chemistry between Tom Baker’s Doctor and Elisabeth Sladen’s Sarah Jane is undeniable, they feel so in-sync with each other that the two are almost eerie at times.  Classic interaction for a deservedly legendary on-screen duo.  I love these shots... 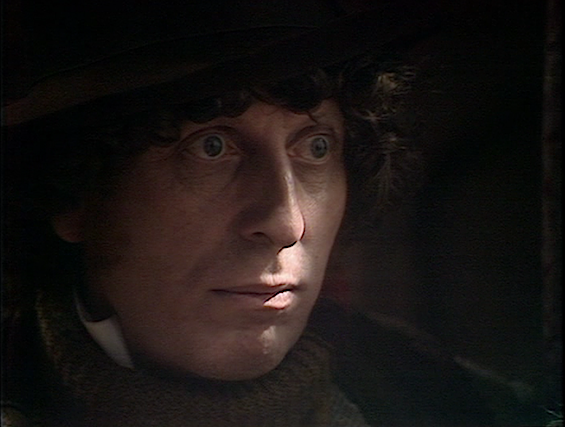 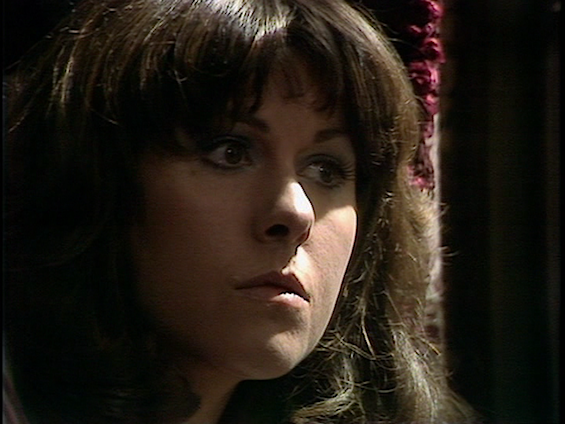 With so many “good” elements, why didn’t “Android Invasion” ultimately resonate more fully in historical sense?  Because, for all of its solidity, it’s also somewhat (as I said above) unremarkable.  There’s nothing here which distinguishes “The Android Invasion” as being noteworthy in terms of concept or execution - nor do any particular elements contribute to a downfall.  It is breezy, smartly structured, amusingly conceived and presented, generally competent, and utterly safe.
Kudos to director Letts and Incidental Music composer Dudley Simpson for recognizing the eerie significance of an early sequence in which mysterious figures re-populate an ‘abandoned’ town - these extended moments play chiefly in silence, with feet shuffling and other occasional ambient sounds bleeding in - but no score it all.  Quite effective.  And an affectionate tip of the hat to whomever conceived of the close-up shot of the Sonic Screwdriver sucking screws out of a hatchway. 'Tis the kind of simple, even obvious, shot many shows would overlook - but also the kind of minutia which sells a “universe” and nicely maintains the “illusion” storytellers are trying to uphold.
A fun, fast, interesting, but ultimately frivolous little yarn which is highly recommended for spontaneous “escape” viewing after a tiring day, but hardly likely to shake the pillars of WHOven.

"The Village That Came To Life"

-- Barry Letts (director of this episode)...

--  Hinchliffe discusses the selection of former DW producer Barry Letts as director of this story...

-- Martin Friend (who played a Styggron in this story)

-- Discussion of locations appearing in the episode...

-- A visit to a local pub introduces us to townsfolk who were around when the episode filmed there...

-- Discusses the fateful decision to ignore a glaring story error because the production didn't have the time to shoot the required sequence to smooth out that plot point.  They thought no one would notice - many did.  The moment in question pertains to the re-appearance of an android we'd previously seen deactivated, with no explanation.  There was apparently a sequence planned which explained this plot movement, but the production ran out of time and couldn't shoot it.

-- Discusses misgivings about a flimsy plot gag involving a character discovering his eyepatched eye is actually "good" and useable...

"Life After WHO:  Philip Hinchcliffe" 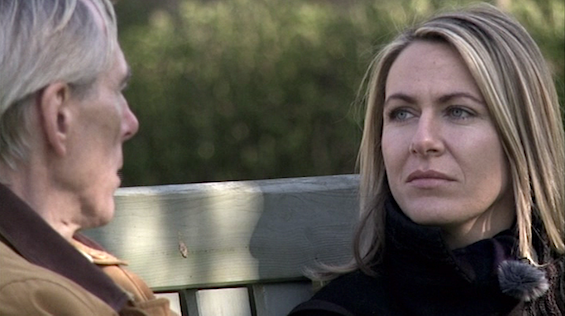 Promo for upcoming DVD release of "The Sensorites"

DOCTOR WHO "Invasion of the Dinosaurs" (Pertwee, Story #71)

DOCBACK/LOCKBACK CODE OF CONDUCT
1) a Docback/Lockback should be about completely open and free discourse regarding all things WHO or SHERLOCK (with, obviously, some variation on subject matter from time to time - the real world intervenes, discussions of other shows are inevitable, etc.)...  2) matters of SPOILAGE should be handled with thoughtful consideration and sensitivity.  Posts containing SPOILERS should clearly state that a SPOILER exists in its topic/headline and should never state the spoiler itself . "** SPOILER ** Regarding Rory" is OK, for example.  "** SPOILER ** Battle of Zarathustra" is fine as well.  " "**SPOILER** Holmes Kills Watson!** " or "**SPOILER** Why did everyone die?"  Is NOT good.
And, above all...  3) converse, agree, disagree, and question as much as you want - but the freedom to do so is NOT a license to be rude, crass, disrespectful, or uncivilized in any way.  Not remaining courteous and civil, as well as TROLLING or undertaking sensational efforts to ignite controversy, will result in banning.  Lack of courtesy may receive one (1) warning before a ban is instigated.  Obvious Trolling or Spamming will result in summary banning with no warning.  One word posts intended to bump-up any Docback's figures on AICN's "Top Talkbacks" sidebar will be considered actionable Spam - they not only complicate efforts to access Docback.Lockback from mobile devices, but impede readers' abilities to follow or engage in flowing conversation.
In short, it's easy.  Be excellent to each other.  Now party on...
Follow glenoliveraicn
Readers Talkback
comments powered by Disqus
Top Talkbacks
Trending