Hey folks, Harry here...   Sometimes you get phone calls that kind of make you scratch your head.   So this week I got a call from Lionsgate asking if I'd like to premiere the first teaser 1-sheet for CABIN IN THE WOODS, a film written by Drew Goddard and Joss Whedon.   I said sure, thinking all that would be required of me would be to say, "Here's the poster..."

Then a couple of days ago they send me the poster.   I looked at it.   It is cool.   But as I stared at it I began to realize...  I really don't fucking know much about this movie.    I mean, I know that it was the first lengthy screen role for Chris Hemsworth...   He had filmed his awesome opening scene in STAR TREK, but we were supposed to see this before THOR...   hell, we were also supposed to see him in RED DAWN before THOR.   But MGM got in such financial wet the bed syndrome, that they didn't even have the money to market and release these films.

For most geeks, CABIN IN THE WOODS is the one we're curious about because of Joss Whedon and Drew Goddard's participation.   Let's face it, Whedon has a significant fan following and always will due to his awesome work on BUFFY and ANGEL...    and Goddard, who is directing for the first time, has worked not only on BUFFY & ANGEL, but dipped his foot in the JJ Abrams worlds of ALIAS & LOST.    Now, Joss is directing AVENGERS and Goddard is writing Spielberg's ROBOPOCALYPSE script.   So yeah.   There might be something to these guys.   But all of that still raises the question...

WHAT THE FUCK IS CABIN IN THE WOODS?

Lionsgate called me two days ago to see if I would like to talk to Goddard & Whedon about CABIN IN THE WOODS & it's momentous poster debut...   "Sure, sounds fun!" was my response.

The call was scheduled for 12:30pm Pacific time, but I received a late text message on my phone at 12:22pm (Central time) seeing if I was ready in 8 minutes for the call.   ARGH!   So I rushed to get my computer - pulled up the poster...   thought about what I had heard about the film - and got on the phone with the guys.

OK.   So it might have helped if I'd seen the movie.   Because it was absolutely clear to everyone involved that other than feeling fairly certain that there could be shirtless Chris Hemsworth in this movie...  and that it might seem possible that EVIL DEAD had some manner of influence on this film...   and then the Rubik's Cube Log Cabin In The Sky...   well that just threw me.

Both Drew and Joss love the poster and the design.  They like that it makes you wonder what is going to happen in THE CABIN IN THE WOODS...  mhm, I am wondering.  But they were very deliciously funny about not giving me any real clues as to what happens in the movie.    I had asked LIONSGATE for a Synopsis before the interview...  this is what I was sent...

THE CABIN IN THE WOODS SYNOPSIS:

Five friends go to a remote cabin in the woods. Bad things happen.

If you think you know this story, think again. From fan favorites Joss Whedon and Drew Goddard comes THE CABIN IN THE WOODS, a mind blowing horror film that turns the genre inside out.

Produced by Whedon and directed by Goddard from a script by both, the film stars Kristen Connolly, Chris Hemsworth, Anna Hutchison, Fran Kranz, Jesse Williams, Richard Jenkins and Bradley Whitford.

See what I mean?   Coy as hell.   Alrighty, so I decided to ask how they felt during the MGM problems and Joss answered, "Anger, Denial...   and then mostly sleepy"  Sigh.    Drew & Joss both talked about their love of the poster, I mentioned how impressed I was that it just wasn't a poster of Hemsworth taking his shirt off.   They both felt that that will be coming at some point.   Along with the required photoshop heads poster.   I asked if they had a name for the poster...   Joss answered straight away that he likes to refer to the poster as BARTHOLOMEW...

Knowing that Joss has a habit of creating things that become action figures - I asked them if they had any characters in this film that they wish would get made.

Ballerina?  What the hell does that mean?   I mean, there was a that wonderful stop-motion BALLERINA scene in EVIL DEAD 2 - is that in this?  Is it something different?   He would not explain himself.   Drew's answer was helpful, because on IMDB, there is a character named PATIENCE BUCKNER played by Jodelle Ferland...  and now we know she has apparently 1 arm.   Another look at IMDB tells me there's a bunch of BUCKNERs in this film.   A Matthew, a Judah and a Mother Buckner.   There's also some other curiously titled characters over there...   like Richard Cetrone's MERMAN?!?!?   Or Patrick Gilmore's WEREWOLF WRANGLER?!?   Tyler Onassis' NOSFERATU?!!?

Officially - what the fuck?   I'm not sure what happens in THE CABIN IN THE WOODS, but it seems to be fairly radical.  Sounds genre bending in a way that could be a whole lot of fun.  Certainly the film is supposed to be a puzzle box of a film, that twists and turns and reveals more.   At least that's what I gathered from Drew and Joss playing with my mind - and the intent of the poster.   What do you folks think?   Whatever, we get to find out the truth about THE CABIN IN THE WOODS on April 13th, 2012. 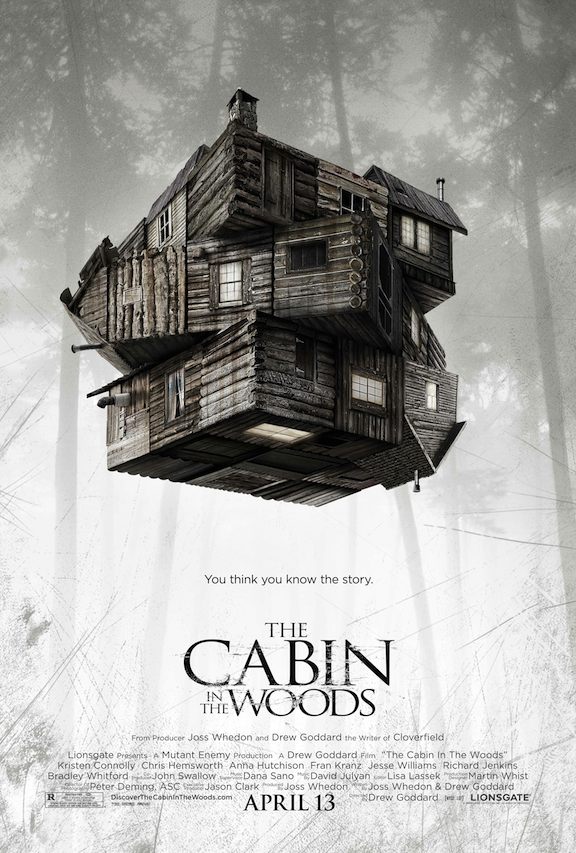