The Friday Docback On Wednesday!? Happy 48th Anniversary DOCTOR WHO!! Plus 'Colony In Space,' And A Chance To Win All Matt Smith Eps On Blu!!

...posting this week's Friday Docback a few days early this week to 1) accommodate a big Thanksgiving holiday here in The States, and 2) acknowledge the 48th anniversary of DOCTOR WHO, which aired its first episode - “An Unearthly Child” - on November 23, 1963.
To commemorate the occasion, BBC DVD have provided one (1) DOCTOR WHO: THE COMPLETE FIFTH SERIES on Blu-ray, and one (1) DOCTOR WHO: THE COMPLETE SIXTH SERIES on Blu-ray.  This is being offered a bundle - i.e. one lucky recipient will snag both of these sets, together. 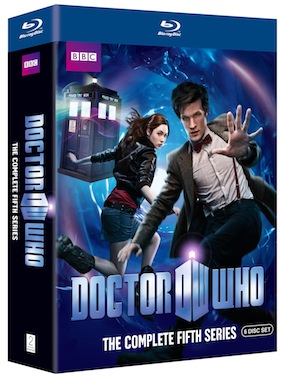 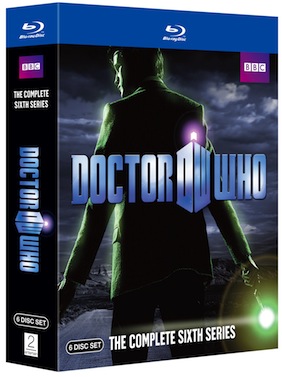 I’ve always felt that Season/Series 5 was very much a soft reboot of the show - never discounting any of its established WHOstory, but aggressively introducing its own look, tone, style, sound, and characters.  It is quite possible to jump into DOCTOR WHO as a new viewer beginning with Season/Series 5, find your bearings, and get hooked.  I know this because this is exactly how I became interested in the show.  This bundle will allow you to get completely up to speed with current Doctor Matt Smith, and afford the opportunity to experience these episodes in their glorious HD iterations.  Which is, without a doubt, the absolute best way to behold this marvelous production.  Note that “A  Christmas Carol”  - the Christmas episode which aired between Season/Series 5 and 6 - is also included in the Season/Series Six set.  In short, this bundle includes all of the Matt Smith episodes to date.
What do you have to do to win this?  ‘Tis very simple, but PLEASE FOLLOW THESE GUIDELINES EXACTLY!
I’ve pre-selected a time of day between now (11:48am CST USA  on November 23, 2011) and 12:01 pm (noon +1) CST USA on Wednesday November 30, 2011.  Whoever’s (Whomever’s?) e-mail arrives closest to this time of day will receive this bundle.  I should note that past AICN contests have (literally) been determined by one second.  I should also note that I’ve NEVER seen two contest entries arrive during the same second.
YOUR SUBJECT LINE must include this exact phrase: THE TARDIS IS BLU.  Any deviation from this subject line will likely result in my not seeing your entry.
IN YOUR MESSAGE: include your full name and mailing address.  This is to expedite your prize shipment only - all entries will be summarily deleted once a recipient is selected.  No Spam lists, mailing lists, etc.
BE SURE TO E-MAIL ME FROM AN ACTIVE AND FREQUENTLY CHECKED ACCOUNT.  If I need to get in touch with you, I won’t spend much time chasing you down and will move on to the next closest entry.
This particular contest is available to North American readers only.  I hope to pull something together for other regions shortly.
You can enter as many times as you want, I'll announce the recipient of the Blus in next week's Docback (unless the recipient specifically requests that I do not do this-  let me know in your entries), and the contest is open now!
SEND E-MAIL HERE!!!

A huge thanks to BBC DVD for both providing these Blu-rays and expediting this opportunity.  If all goes well, we hope to be doing things like this more often...

** Not a great deal of love for the new MUPPET movie... 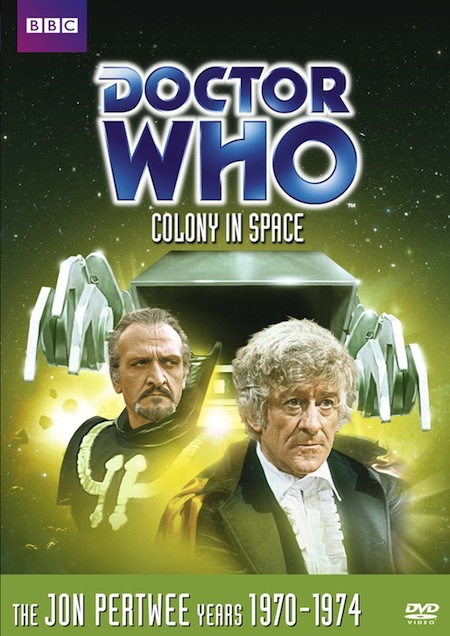 "All colonists are eccentric Morgan, otherwise they wouldn't be colonists."
Dent - “Colony in Space” Episode 2
Scripted by Malcom Hulke, “Colony” hits the ground running when it quickly dispatches The Doctor (Jon Pertwee) on a mission to Uxarieus alongside his companion Jo (Katy Manning).
For Pertwee’s incarnation of The Doctor, this is an unusual and joyous occurrence.  He‘s been grounded on Earth for sometime per The Time Lords back on his homeworld, and this is his first opportunity to adventure offworld.   But...why?  The Doctor suspects the TARDIS is under Time Lord control when it caries him to Uxarieus, although his purpose there is initially hazy at best.
On the planet he finds hungry settlers whose crops refuse to grow, and the ever-present threat that colonists could soon face relocation by the Interplanetary Mining Corporation (IMC), a militant band of well-supplied, spacefaring assholes with a really cool ship... 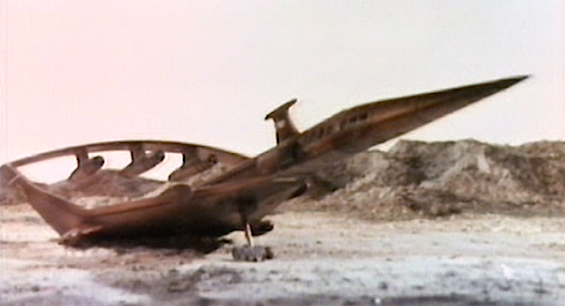 ...and think nothing of the colonists’ well being or fate.
The Time Lord’s interest in the planet’s affair becomes much clearer with the unexpected appearance of The Master (Roger Delgado), The Doctor’s Gallifeyan nemesis (his Moriarty?), whose feigned interest in the affairs of the colonists and IMC actually conceals a far more diabolical plan.
CiS...is all over the place.  It begins briskly, and deftly sets-up it beleaguered colonists -vs- exploitative Capitalists Pigs storyline, even throwing in an an ancient Sleestakian race and an unexpected “giant lizard” for good measure. 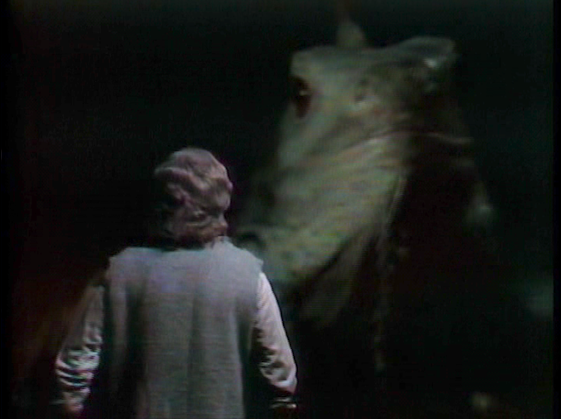 There are nifty moments involving the mechanics of space craft navigation, and the notion that these colonists pooled together their money to purchase an already antiquated vessel...because it was all they could afford and their only way to leave Earth...is a charming Science Fiction conceit.

To the credit of all, the bad guys here are amusingly douchey.  While IMC is running the colonists off of their planet, one of the IMC henchmen reports back to his suspiciously Aryan boss Dent.
MORGAN:  I’ve just been checking over the colonists’ spaceship.
DENT: Oh?
MORGAN: Ash is right.  It’s in pretty bad shape.  There’s a fair chance it may blow up on the ground.
DENT:  Make sure all IMC personnel have cleared the area before take-off, will you?
What a jackass.
Delgado is a joy as the matter-of-fact, always focused on a prize Master.  The relaxed antagonism between his character and Pertwee’s Doctor evokes James Bond’s banter with his the best of his super-antagonists.  Cheers to Hulke for conjuring a clever way to insinuate The Master into these proceedings - the reveal of his presence is nicely handled as well.  However, when one steps back and considers The Master’s deception in-full, his ruse and much of the plot surrounding him actually feel a bit unnecessary and don’t make a great deal of sense.  It’s fun, but a tad illogical.
Alas, with so much going for it, “Colony” never pulls itself completely together.  There are schemings and meetings and strategizings on both sides which start to feel  a bit repetitive, and the colonists -vs- IMC debacle never feels particularly urgent or desperate.  This said, CiS offers several gunfights, Pertwee dropping opponents with Venusian Aikido on a number of occasions, a spaceship blows up, and there’s a robot named Charlie.   There's always a little something to keep things rolling, making “Colony in Space” rather cool, even if its story structure is never as sexy, smooth, or reasoned as it might’ve been.
Now available on DVD HERE in the U.S. and HERE in the U.K.

IMC NEEDS YOU (25:00)
Featuring...
-- Producer Barry Letts (2008 interview)
-- Script editor Terrance Dicks
-- Director Michael Briant
-- Bernard Kay (Caldwell)
-- Katy Manning (companion Jo Grant)
-- Graeme Harper (assistant floor manager)
-- Discusses the challenges of locating interesting looking vehicles for use in the story's offworld locations...
-- Discusses efforts to  locate quarries that were larger than usual to give this episode a grander scale than quarry location work seen in previous episodes...
-- Discusses the environmental challenges (weather) of shooting and said quarry...
-- Discusses the development of the aliens seen the episode...
--- First story to remove Pertwee's Doctor from Earth setting.  Discusses the trickiness of developing a scenario in which this move was plausible within the (at that point ) constrictive storyline of the show...
-- This episode is noteworthy because the TARDIS doesn't soft dissolve into and out of existence. Instead the customary a grinding sound leads to the TARDIS entering or leaving via something of a snap cut. Director Michael Briant discusses how this wasn't some bold or ingenious creative decision - instead, it happened because he couldn't remember how the TARDIS behaved in previous episodes and he took his best guess (which turned out to be inadvertently discontinuitous).   I'm not sure how this works out logistically - no one caught it, at any point?  Was the film necessary to create the TARDIS' soft dissolve simply not captured on-set?  I *believe* that's what he's inferring...
--- Director Michael Briant discusses his reaction to seeing HELLO DOLLY in a theater while filming this episode, and how humbling it was to see it large-scale highly complex theatrical film at the same time he was making a relatively modest little DOCTOR WHO story...
FROM THE CUTTING ROOM FLOOR (12:52)
Featuring soundless 16mm film footage from both location and model work for "Colony in Space."
PHOTO GALLERY (5:50)
PDF MATERIALS (Radio Times Listings)
COMING SOON (1:27)
Trailer for "Invasion of the Dinosaurs" (Pertwee, Story #71) and "The Android Invasion" (Baker, Story #83).  "Resistance is inadvisable" - a very British precursor to "Resistance is futile"?

"The Dalek Invasion of Earth"