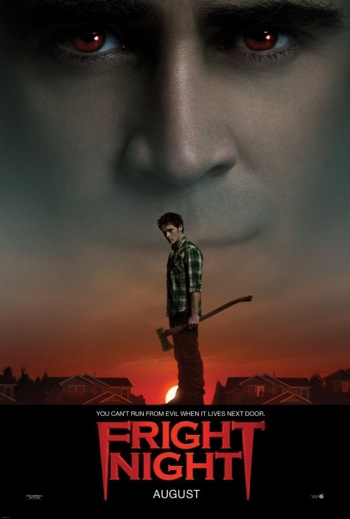 August 18, 2010. Just past midnight. A stretch of two-lane road some twenty miles outside of Albuquerque, New Mexico is bathed in artificial light. There's been an accident. A minivan and a sedan have made each other's brusque acquaintance and now rest fifteen feet from one another, shattered glass littering the blacktop around and between. There are dozens of people mulling about, but no one seems concerned or injured. In fact, the driver of the smashed-to-shit minivan is in high spirits. Apropos of nothing, she begins popping and locking. Soon, she's moonwalking over the road toward the crippled sedan. One of the minivan's passengers, a lovely blonde, shrieks with delight. This draws a mild rebuke from the group huddled around the sedan. "Quiet please." Message received. The impromptu breakdancing exhibition is halted, while the adults go back to choreographing a man being yanked out of a car by a vampire.

Welcome to Day Seventeen on the set of FRIGHT NIGHT. The Remake. For real.

And in 3D! For the first time in my life, I'm standing in video village with a gaggle of producers and executives watching playback through 3D glasses. Though you have to sit directly in front of the monitor to get the full effect, it's still pretty cool to see images popping off the screen as the Red One camera captures the scene twenty feet away. The unit publicist hands me a headset so I can hear the dialogue being shouted by the actors. Though no one's giving up much in the way of story, it's obvious that Charley Brewster (Anton Yelchin), armed with a hastily-devised stake cross, is attempting to protect his mother (Toni Collette) and his girlfriend Amy (Imogen Poots) from the fully-transformed Jerry Dandrige (Colin Farrell). As Jerry rapidly closes in on Charley, the driver of the sedan leaps out to have a word. He's a little irritated. And he looks awfully familiar. In a split-second, Jerry Dandrige spins around and is face-to-face with... Jerry Dandrige?

Evidently, someone at DreamWorks did their homework and figured this FRIGHT NIGHT aficionado might want to be on set to witness the meeting of the Dandriges. While I'm certainly thrilled, I can't imagine how Colin Farrell - an avowed, no-bullshit fan of Tom Holland's 1985 classic - feels about sharing a scene with the first Jerry, Chris Sarandon. It's a cool, respectful moment, one that is played over and over again from multiple angles all night. It never gets old*.

This is also my first hint as to the tone of remake. There's nothing funny about Farrell's Jerry; with his hideously contorted visage and claw-like hands, Dandrige has been envisioned by makeup artist Howard Berger as a stone-cold killer. You don't see Farrell under there at all - or hear him, given that he's playing the neighbor-from-hell as an American. And while everyone's certainly having a good time in between takes, there's nothing at all amusing to the scene. It's being played for straight-up scares. 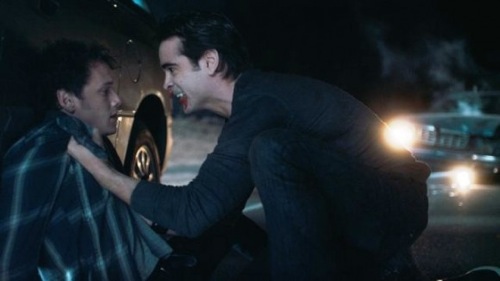 This is exactly why producers Michael Gaeta and Alison Rosenzweig wanted to update Holland's film: to counteract the sparkling emo vampires of TWILIGHT. "The way the public image of vampires now is softer, gentler and kinder," says Gaeta. "This is definitely not that. It's got to be scary."

"Colin's going to take care of that," says Rosenzweig.

So it's a great big "Fuck You" to TWILIGHT, huh? "I don't want to say it's a 'Fuck you'," clarifies executive producer Josh Bratman. "But it's a different approach."

How different? "These are real fucking vampires," says Yelchin.

So that takes care of scary. But what about the other integral component of Holland's original: comedy? Gaeta and Rosenzweig credit screenwriter Marti Noxon with striking the right balance of laughs and screams. "We searched far and wide for the perfect writer," says Rosenzweig. "Marti is the perfect writer, and she did a perfect job on the script."

Though Noxon was comfortable with juggling those tones, her key contribution to the screenplay was identifying the hook that would set it apart from Holland's film. "I don't think that some of those coming-of-age thresholds, like, "Oh, my god, I'm losing my virginity," are necessarily the most important issues for today's kids," says Gaeta. "It's all so familiar to them."

So Noxon's script is about a de-nerdified Charley tentatively running with the cool kids in school. He's dating one of the most beautiful girls around, hanging with guys who used to humiliate him, and doing everything he can to ignore his dorky one-time best friend, "Evil" Ed Thompson (Christopher Mintz-Plasse, who was enjoying a night off when I visited the set). In Noxon's version, it's Ed who's the first to pick up on Dandrige's nocturnal shenanigans, and Charley who wants no part of digging for the truth (the Las Vegas setting gives Dandrige a bit of cover; it's a transient population, so random disappearances are nothing out of the ordinary). But matters eventually take a turn for the worse, and Charley is forced to defend the women in his life from the sleazy, predatory Dandrige.

Thus bringing us to the other crucial element of Holland's movie: Peter Vincent, vampire killer. Since late night creature feature hosts are now, sadly, a thing of the past, Noxon decided to write Vincent as a schlocky Vegas illusionist in the mold of Criss Angel. The casting of David Tennant, the popular tenth Doctor Who, certainly excited genre fans, but how exactly does a rock-star magician take the place of a washed-up actor who used to slay fake vampires for a living?

There's silence and an exchange of glances when I ask the producers about this. "David is younger," says Rosenzweig.

"He's a guy who's been going through the motions," clarifies Bratman. "And when [Jerry] comes into the fray, it makes for a really interesting character." So that's a big wait-and-see.

Though Tennant's portrayal of Peter Vincent is apparently a state secret (he also wasn't called the night of my visit), the fate of one character is evidently fair game. As the evening wears on, director Craig Gillespie finally gets to the point in the scene where Farrell's Dandrige sinks his fangs into someone's neck - replete with full-on arterial spray. This is why you make a fucking vampire movie. I watch in giddy anticipation as the f/x guys snake a tube under the to-be-chomped party's wardrobe up to the collar of their shirt. There's an agonizing pause as Gillespie works through a technical issue with the 3D supervisor. Finally, they're ready to go.

"Action!" Farrell rears his head back and dives for the jugular. There's a pop, then a geyser of blood shooting into the night sky. "Cut." Farrell pulls away. One side of his ashen visage is coated in fake blood. That went better than I could've possibly imagined. Once the applause dies down, Gillespie calls for a no-blood take (there was a time when DreamWorks was considering a PG-13 FRIGHT NIGHT; they wisely opted for the R). Good enough. I've seen Dandrige meet Dandrige, a live vampire bite and Toni Collette breakdance. I'm ready to call it a night.

Sunrise is a few hours away as I wait for a cab back to civilization. It's eerily quiet, save for a strange buzzing to-and-fro overhead. Bats. You've got to be kidding me. And so I listen to them. Children of the night. What sweet music they make.

P.S. When in lovely Albuquerque, be sure to grab a chili dog at the Dog House Drive In. I walked two miles in mid-ninety-degree heat for one, and regret mostly nothing! (Thanks, Josh!)

*During a break, I headed over to chat with Sarandon, who seemed more than happy to be passing the fangs over to Farrell. I was cautioned about recording on set, so I've no hard quotes to share from our brief conversation. I did, however, conduct a lengthy interview with the legendary actor a few years ago, so if you want more Sarandon, here 'tis

I also spoke briefly with Farrell during a break in the action. I actually thought I'd been approached by a stunt double in makeup until I heard, in that familiar brogue, "Mr. Beaks, you've revealed yourself." Farrell had family on set that night, and seemed to be having a blast vamping it up under all of that latex.