Quint has a brief chat with Paul Giamatti about his Sundance hit Win Win as well as the upcoming cult flick John Dies At The End!

Ahoy, squirts! Quint here with the first batch of my crazy Sundance interviews in my Park City catch-up week. I left Sundance immediately for a trip to NYC where I talked with Trey Parker, Matt Stone and Robert Lopez about The Book of Mormon and came home to a whirlwind of activity and more technical difficulties with the new admin side of AICN. In other words that’s my excuse for being a little late with the interviews.

I conducted quite a few interviews in Park City so this week you’ll be seeing a few chats a day until I run through them all… except for tomorrow. Tomorrow’s my birthday, so I’m taking the day off.

But the rolling train’s gotta get moving at some point so today I’m running two interviews. This one with Paul Giamatti was a quickie, unfortunately. That dude knows and loves his movies, I would love to have spoken to him longer, but the poor publicists were doing a crazy game of musical chairs with the entire cast of Win Win. I sat in the same spot and they kept circulating the talent until I had spoken to them all.

As a result some people I got full interviews with (see Tom McCarthy and Bobby Cannavale interviews coming this week) and some, like Paul, are truncated.

Win Win is a fine family drama about little lies that a man feels he has to tell in order to gain the stability he desires. Giamatti plays the lead of this film perfectly, but that’s Giamatti for you. The man’s a professional and always brings his A game.

In the film he plays a low level lawyer and part time high school wrestling coach and the two worlds end up mixing when he quasi-adopts a troubled teen who just happens to be an incredible wrestler.

We talk a bit about Win Win and also a bit about the upcoming John Dies At The End, a crazy-looking film from director Don Coscarelli that Giamatti is producing and appears in. Oh, and there’s a tiny bit about The Goon at the very end, but nothing super substantial.

There is some spoilery talk about Win Win, hence the spoiler box around this article, but I figured I'd run one more warning in case someone misses the big red spoiler box! 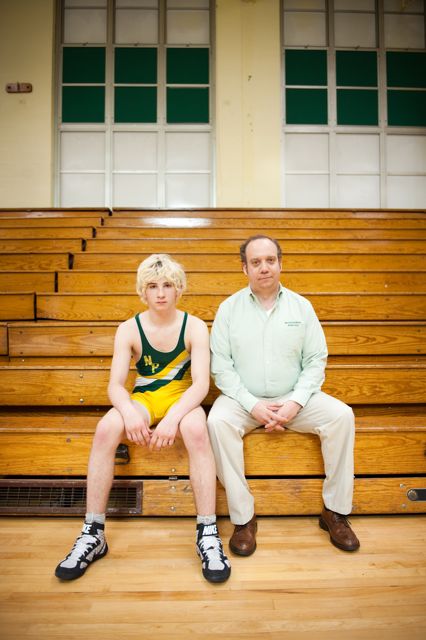 Quint: I’m Eric with Ain’t It Cool. We talked once over the phone, but it’s good to meet you in person.

Quint: So, I spent two days on the set of JOHN DIES AT THE END…

Paul Giamatti: I just saw some of that.

Paul Giamatti: It looks great. It looks really great. I’m so excited about that film. I’m so looking forward to the movie. I think it’s going to be great. It looks amazing what (Don Coscarelli)’s already put together.

Quint: And the leads are good, too.

Paul Giamatti: Those kids were great that he had… not kids, but those young guys we had were great. Amazing guys.

Quint: We should probably talk about this movie, since that’s why we’re here.

Paul Giamatti: Okay, I’d love to talk about John, but that’s cool. We can do a little bit later.

Quint: Yeah, we will go back to it.

Quint: I saw WIN WIN this morning and it really worked for me. One thing that I love about Tom [McCarthy]’s movies is that they straddle that line between melodrama and… Well they don’t straddle a line, they are full melodrama, but they aren’t sappy. He finds the heart, he also finds the reality of it.

Quint: If he goes one way in either direction, he’s either going to be sappy or he’s going to be cold, you know?

Paul Giamatti: Right. Well that was the thing about the script when I first got it, I thought “It’s really interesting, because it seems like he wants to make a movie about American suburban life that’s not going to be making it grotesque or making it sappy.” He was really acidulous, especially about not letting it get sappy and it was interesting watching it last night, because I haven’t seen the whole thing before and he really, really goes for making sure that he compresses scenes and doesn’t let them go on too long and get sappy. That’s a hard trick to pull of with this stuff.

Quint: I’ve got to imagine that there’s a trust factor there as well as an actor and director. I talked to him earlier and he was talking about how much rehearsal…

Paul Giamatti: Well the fact that we rehearsed as much as we did is amazing. He’s constantly re-tweaking the scenes and rewriting them and asking you what you think and so it’s this really fluid process, the whole thing.

Quint: Outside of JOHN ADAMS and a couple of other things, you typically don’t get to have a happy family.

Quint: He seems to be like a lot of people where he’s living what he likes and he’s kind of in where he wants to be, but he’s just right under the bar. It’s just one thing coming through to make things comfortable, where he’s been struggling. I really liked that part of the character and I also liked the dynamic between your character and Amy [Ryan]’s character.

Paul Giamatti: Well, it’s an interesting portrait of a marriage. Somebody pointed out to me that I think we only kiss each other once in the movie and it’s a real kind of [quick] “See you sweatheart” kind of thing. Again, it’s not sapped up and it’s also not like “Oh my God, they secretly hate each other.”

Paul Giamatti: I know and hopefully to other people.

Quint: The reason why I liked it was for the moment where… and I was kind of dreading this because it’s a big cliché… which is “Okay, he’s going to get found out. He’s going to get kicked out of the house and all of that stuff” and I’m just waiting for it and that’s not what happens.

Paul Giamatti: Doesn’t happen, no… The movie thwarts expectations a lot. I love the whole sports aspect of it, because nobody actually wins in this movie and it’s the sports thing and the moment of kind of sports movie victory is about a kid who deliberately throws his match. The kid deliberately loses on purpose, so it’s constantly kind of thwarting those expectations, which is great.

Quint: You also got to have the inspirational coach speeches with more F bombs than are typically in them.

Quint: Before they start giving me the signal, we should probably talk a little bit about JOHN DIES if we are going to do it.

Quint: The book is fantastic.

Paul Giamatti: I never read the book, I have to admit.

Paul Giamatti: It’s what I figured.

Quint: I’ve known Don for I don’t know ten or twelve years and he confided in me before BUBBA HO TEP and we were talking back when Meatloaf might be Elvis and all of this stuff and…

Paul Giamatti: I never knew that.

Quint: was like “Here, check out this book. I think this is going to be my next thing” and I’m like “Okay.” I read it and I hadn’t heard of it before and the moment that I was like “This is going to be amazing” was whenever the cold cuts monster gets up and they run for the door and the door handle turns into a dick.

Quint: Then he turns around and says, “This door can not be opened.” I’m like “Alright, this is so up Don’s alley.”

Paul Giamatti: It’s really up Don’s alley. It’s very specifically that funny, weird, quirky tone of his. It’s perfect. I know it will come off.

Quint: You’re producing it too, right?

Paul Giamatti: Yeah, we were helping him produce it. No man, it’s almost like an embarrassment of riches, that thing. It’s almost going to be like what’s going to be tragic is what’s going to have to go, because stuff is going to have to go and it’s like it will kill me whatever goes because you want it all to be in there and you’ve still got to have this stuffed bag of stuff. I mean I saw the bratwurst scene, which is so hilarious, and the guys that he got, Chase Williamson who plays Wong is… He’s got the tone so perfectly. He’s fantastic in it, that kid. He’s really good. Don cast it brilliantly. The actors were so good.

The guy who plays the Rastafarian is amazing and that’s one of my favorite things in the movie, that speech that that guy has about the dreams and the thunder and all of that stuff. The guy does it… It’s fantastic.

Quint: Well I can’t wait to see it and I hope THE GOON gets off the ground, too.

Paul Giamatti: Me too, I know. I think it will.

Quint: I just talked to Fincher and I was like “Come on…

Paul Giamatti: I saw him too and I was like “What’s the deal, man?”

Quint: He’s like “I hope this is the year that they tell them to start Pixar…”

Quint: It’s cool though. It’s such a great idea.

Paul Giamatti: We will see. Thanks, man.

Quint: Thanks so much for taking the time to talk with me!

I got a lot of Win Win talk coming up. Director Tom McCarthy and cast members Melanie Lynskey, Amy Ryan, Bobby Cannavale and newcomer Alex Schaffer, plus some My Idiot Brother interviews, a chat with Jason Eisener and Rutger Hauer for Hobo With A Shotgun and the other one hitting today… a nice, lengthy chat with a pair of awesome Korean filmmakers: director Kim Ji-Woon (The Good, The Bad and The Weird) and actor Lee Byong-hun for their amazing revenge flick I SAW THE DEVIL. Look for that one to hit a little later today!