Toronto: Copernicus on GAME OVER: KASPAROV AND THE MACHINE!

Hey folks, Harry here with the latest bit of stargazing analysis from the resident super-genius of AICN... Copernicus. This time, he turns that stewed mind of his to GAME OVER: KASPAROV AND THE MACHINE... a documentary from the god that made WHEN WE WERE KINGS. I fully believe those corporate bastards at IBM cheated. They don't have the morales and standards of true human beings that use Macs! Big Blue is evil... and just like satan... deceptive, evil and should be made to crawl upon its belly for all time! Yeah! Kasparov rules!

GAME OVER: KASPAROV AND THE MACHINE

Oscar winner Vikram Jayanti (When We Were Kings) turns in another stellar documentary with GAME OVER: KASPAROV AND THE MACHINE. The film recounts and analyzes chess Grand Master Gary Kasparov's loss to computer opponent Deep Blue in 1997 and fuels the controversy surrounding the match.

The intersection of chess and computers -- it doesn't get much more cerebral that that. These are hardly subjects that lend themselves to cinematic examination. Throw in the fact that this is a documentary, and you might be wondering if Jayanti was trying to commit career suicide by taking on this project. Is he getting his funding from Nytol? Actually I think his decision to tackle the challenging subject matter is more like a manager who takes over a last pace team after he has already won the World Series.

Well, whatever the reason he took on the project, the reason this movie is such a success is that it is exactly contrary to your expectations. Before the show, Jayanti said (and I am paraphrasing), "Welcome chess geeks, computer scientists, and mathematicians. I must warn you that I did my best to take every bit of chess out of this movie." That about sums it up. Instead this movie is about people -- chess is just the backdrop, and machines are just the foil.

The movie opens with brief prologue about the chess-playing automaton "The Turk" who beat human opponents in the 18th century by having a human controller concealed from view. "The Turk" then becomes an iconic touchstone and thematic reference point throughout the film, through black and white archival footage and new shots of a recreation intercut throughout the Kasparov story. 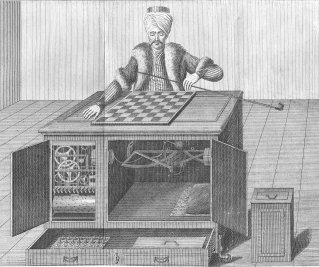 Kasparov's story itself is quite compelling. As he rose through the chess ranks in the Soviet Union he was undercut at every turn by the authorities who preferred the easier to control champion Karpov. Eventually, Kasparov's genius became undeniable, he beat Karpov and everyone else in the world, and is now recognized by almost eveyone as the greatest chess player that ever lived. The film recounts some of Kasparov's achievements, and the charismatic genius tells much of the story in his own words as he travels to the sites of past victories.

But how did such an unstoppable force then lose to a computer in 1997? Many in the chess world believe that a late-game move by Deep Blue in game 2 of the match was very un-computer-like. The move so devastated Kasparov that he conceded the game and overlooked the fact that he could have played the match to a draw. Kasparov never recovered and played out the remainder of the games agitated, paranoid, and unsure of himself. Jayanti highlights that these very human responses are what ultimately lost Kasparov the match. But at the same time, Kasparov shows that humans possess a capacity for genius that allows us to regularly outwit a computer thinking at 200 million computations per second.

Kasparov maintains that IBM cheated during the match. Various bits of circumstantial evidence might lead one to this conclusion. The move Deep Blue made was completely unlike anything seen from a computer before (it avoided taking a pawn, an obvious gain in "points" to instead establish a strategic position). IBM refused to provide logs of the decision making done by Deep Blue, despite an agreement to do so. No outsiders were allowed in the room with Deep Blue. They also dismantled the machine and never granted a rematch. But there is no proof of wrongdoing, and the film leaves it up to the viewer to decide whether or not Kasparov was cheated or is simply so arrogant that he cannot accept defeat.

Members of the Deep Blue team were interviewed for the project, but they are shown in a less sympathetic light. Though their genius allowed the creation of such a remarkable machine, their contributions are only touched on. They don't have the charisma of Kasparov, and somewhat unfairly they are portrayed as little more than themselves pieces of the corporate machine.

Jayanti does this to set up IBM as the bully, and perhaps rightly so. They are the huge corporation with limitless resources that ultimately "kills" Kasparov in this information age retelling of John Henry the Steel Drivin' Man. No matter what really happened during the match, IBM did seem unnecessarily ruthless in its pursuit of the crown. They seemed to do things to try to agitate Kasparov and fuel his paranoia, and of course their refusal to grant a rematch is inexcusable. They also profitted substantially from the victory -- their stock price rose 15% as a result.

While the story told by the director is compelling, the greatest asset of the film is that it is shot more like a feature than a documentary. The director makes excellent use of lighting -- when is the last time you saw that in a documentary? The camera is always in motion. Even talking heads don't remain centered in the frame -- if the camera isn't wheeling around for a 360 degree shot, it is running through focus, or straining to keep the speaker in frame. Some of the narrative recounting the "conspiracy" is whispered, and the score is right out of Unsolved Mysteries. At times these tricks almost seem to go over the top, but they never quite do, instead always leaving you on edge and involved in the unfolding story.

The pacing of the movie could be tightened up a bit -- not all of Kasparov's visits to the sites of former matches are very compelling. But this is a minor gripe. Despite the documentary's feature length, is a compliment to the director that I was left wanting more. The growing "intelligence" of machines is barely brushed on, and Kasparov's recent match with "Deep Junior" is hardly mentioned. Still, I can't blame Jayanti for keeping the focus of the documentary where it belongs -- exploring the genius of Kasparov and his (and ultimately our) humanity. 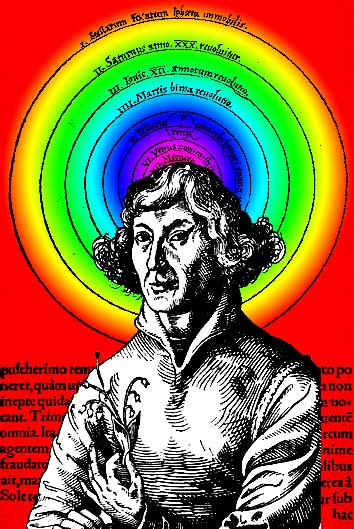