UPDATED! He's Green! He wears Purple Pants! And he just threw a tank across the frickin' desert!!! THE HULK!!! 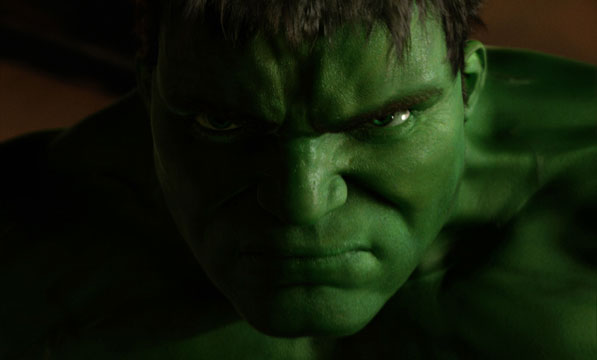 Harry here with an Update on the HULK... Above is the first GREAT shot of the HULK up close and frankly... He kicks all sorts of ass in my opinion. Second The folks at SUPERHEROHYPE.COM are who had this up and that they have several other HIGH QUALITY Shots from the trailer as well!!! Plus at this link they have mirrors of the HULK TV Spot that rules planet Earth or... at least will during the Super Bowl!!! That is all!

Hey folks, Harry here... HOLY SWEET MONKEY NOODLES IN PEKING PLUM SAUCE! That is an incredible HULK! Ok, I'll admit it, I'm weak in the knees hoping this movie unleashes unholy wrath upon my ass and the collective world's ass. Seeing the Hulk spin a tank and launch it across the desert... BLISS, UTTER BLISS! I mean what else that is green could possibly give me this state of sweet euphoria and calm? This HULK trailer/commercial is so good that fear has left the noggin and only... ME GOTTA SEE THIS THING NOW! Enters the permanently wrinkled flesh! God this looks sweet. Yes, I know I'm still worried about the story too, but at least they're showing us this, which makes me dream that this could be great!

I dug through the HTML on the Universal Web site and found this: 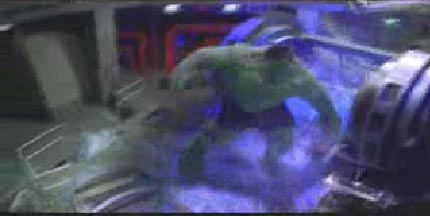 Hurry Before It Moves To Another Location and Ceases to be the HULK!!!!! 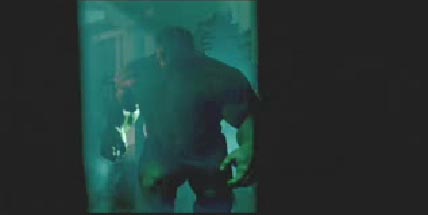 I believe it's the first footage of the Hulk in action. Maybe it's the Superbowl ad? Have you seen this footage? 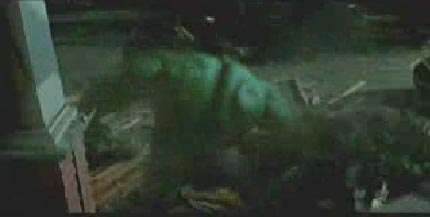 So... did you click and find nothing waiting for you there? I’m sorry... I really am. Because my first reaction?

This is played over a few shots of Eric Bana gettin’ all tense and freaky, with Jennifer Connelly trying to calm him down. We see him at a microscope, then we see some DNA in close-up, and then Bana gripped by the agony of transformation. There’s a quick flash of the outline of something huge and green and... well... hulking... and then that same close up of the eye in mid-transition that we saw in the teaser trailer.

And then the rest of the spot is comic geek manna.

”On June 20th,” a title card reads, followed by shots of the Hulk leaping through the wall of a lab and turning around for a quick shot of his face. Then helicopters! And soldiers piling out of trucks! And The Hulk destroying a house! And Nick Nolte lookin’ freshly date-raped! And more soldiers! And San Francisco! And Connelly hugging Bana in the streets... AND HE’S WEARING PURPLE PANTS!!

I love a few shots dearly already. Nolte facing down The Hulk, looking totally piss-scared. The Hulk flipping a tank over onto its side. Something coming through from underneath a San Francisco street and toppling a trolley. Any shot involving The Hulk leaping.

And, oh, yeah... the one where he picks a tank up by the gun barrel, spins around in a circle, and tosses it. That’s pretty much as cool as it gets.

The last two shots are a great close-up of his face, which is actually pretty impressive work, and then what looks like part of a dream sequence as The Hulk lunges out of a mirror to grab Banner.

This is a craptastic Windows Media version. I can’t wait to see this Sunday during the Super Bowl, and more than that, I’m dying for the full-length trailer that Marvel’s going to have in front of X-MEN 2 (or so I hear).

Consider me one happy fanboy right now. Let’s see what the rest of you have to say...