Like any red-blooded American male, when I heard there was a new Don Coscarelli movie about Elvis and JFK taking on the mummy Bubba Ho-Tep, who's sucking the life out of nursing home inhabitants, I had to check it out! Throw in Bruce Campbell as the jumpsuited crooner, and you've got a winner in my book.

So, my girl Badtz McRu and myself headed down to Downey to extra in a flashback sequence- Elvis, as an Elvis impersonater, at a crummy little concert- looked like a fair or carnival concert, I'd guess.

Unfortunately, they weren't shooting any "action" sequences this particular day, they'd already gotten footage of a trailer park being blown up earlier. ;) On the bright side, we'd be witnessing Bruce in FULL Elvis glory- dancing, singing, handing out scarves to the 70s-looking ladies up front. Badtz was right behind the scarf-girls, but as they were (all but one) members of the cast and crew, she was shut out. Oh, the pain.

More importantly, Bruce tried to liven our sour mood as the night got closer to 1:00am, cracking jokes on the town of Downey, answering minor queries about "Briscoe County" and "Xena"... (His reply to a "Briscoe" question: "Keep watching!") In addition, he was in heavy make-up, and he looked the part of a 70's Elvis pretty well. The music quality wasn't great, it was cold, but Bruce as Elvis was enough. Apparently they're shooting stunts involving elderly women getting attacked by scarabs today.

Side note about Downey, CA- what is the deal with this town? Every building in the area we shot in was boarded up- looked like "Escape from New York" without the piss and vomit. The cops kept swinging by and watching the shooting- made no sense, what with the lack of donuts and all. Oh, and there was the most magnificent tree in the middle of the area we shot- it's a pity it won't be in the film, anyone who was there can attest to the tremendous size and grandeur of this tree- its roots had roots. ;) Unfortunately, they'll probably tear it down with the rest of the decrepit old buildings.

Anyhow, word was shooting is nearly complete, and they claim they're getting a theatrical release... no matter how cheesy some folks may think Don and Bruce can be- who in their right mind would rather see "Freddie Got Fingered"?

and then THE sent a report and a pair'a'pics.... 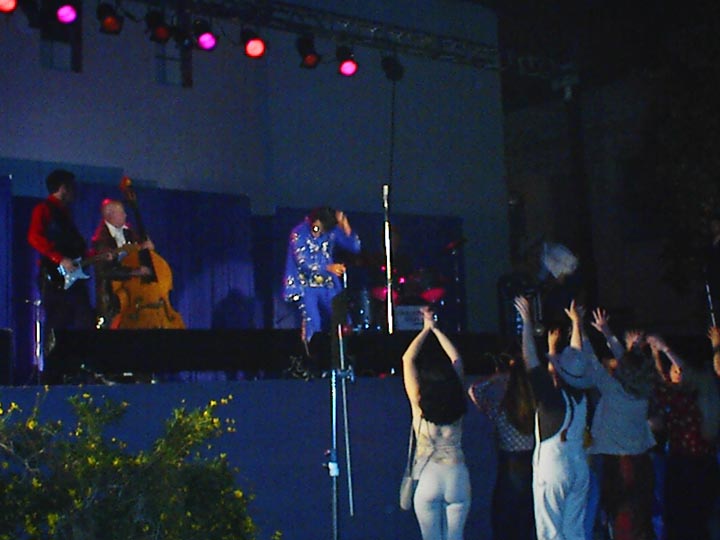 Hey AICN crew, how's it going? I'd just like to thank you for posting the open call for extras for Bubba Ho-Tep. I was one of the lucky few who got to go and spend the evening with Bruce Campbell and Don Coscarelli Jr. (The director of Bubba Ho-Tep).

Bruce was wearing a wig, fake sidburns, a fake chin(!), fake nose, and tons of pancake. They also filmed a couple of quick shots that take place in 1965, and were going to do a stunt take with Elvis falling off the stage. I didn't stick around that long, however I never saw a stunt double anywhere, so I'm assuming it would be Bruce doing his own stunt.

I took a couple of photos on my el-cheapo digital camera. I had to have the flash turned off, so most of them turned out under lit and blurred. I hope you can use them.

If you can use the photos, call me The. That's right, just plain The. 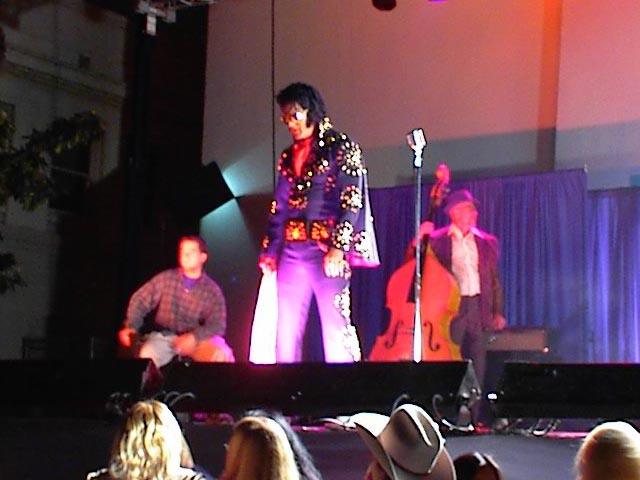